Mayflower Madame – Prepared For A Nightmare

Through the striking propositions found within their debut album of 2016 and a following EP, it is fair to say that eager anticipation for the release of a new album from Norwegian band Mayflower Madame was fired up upon news of its release, one only accentuated by a recent single taken from the ten track encounter. It was an intrigue and hope which has been quickly replaced by sheer pleasure as Prepared For A Nightmare is one of the most captivating and hauntingly fascinating pleasures of the year so far.

That first album, Observed in a Dream, shared a sound which bred from a fusion of post-punk, shoegaze and psychedelia hungrily gripped and fed our ears and imagination. It proved a compelling proposition which the following Premonition EP in 2018 only echoed as it built upon the prowess and strengths of the previous release. In turn Prepared For A Nightmare has taken the potent attributes of those before it and evolved them into its own impressive strengths and temptations and indeed a real uniqueness which was may be not quite there on its predecessors. Without distilling any of the cold shadows and apocalyptically hued romance and intimation which has made their music in sound and character so compelling to date, there is a warmer dare we say slightly poppier aspect to the new album and one which has only accentuated the rich imagination and breath of the Oslo hailing trio’s sound.

Prepared for a Nightmare opens with its title track, a shimmer of light drawing attention as a darker hued sonic sigh lures the subsequent full body of rhythmic incitement and melodic intimation to emerge. It is a weave of almost menacing psych rock temptation and crystalline suggestion, the guitars of Håvard Haga and Trond Fagernes spinning strands of sonic luminosity across rhythmic manipulation. With Fagernes’ vocals an equally magnetic draw and, in the first of two appearance within the release, Petter G. Marberg’s bass a heady tenebrific grip on the senses, the track was swift and inescapable captivation. 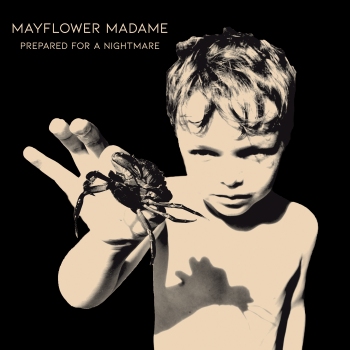 Recent single, Vultures, is next up to be quickly followed by its successor in Swallow. The first of the two tracks similarly entices with a lone lure, a guitar suggestively teasing ears before the virulent gait and enterprise of the track erupts to join its persuasion. The senses nagging beats of drummer Ola J. Kyrkjeeide alongside Fagernes’ moody bassline were swiftly under the skin, the latter’s tones again a thick lure into the kaleidoscopic beauty of the track. Yet there is a predatory edge to it all which grips just as firmly, post punk rhythms and steely grooves colluding with spiralling psych guitars and harmonic vocals to escalate the guileful nature of the song.

The second single opens with a percussive clipping of the senses aligned to a delicious intrigue woven hook; its intimation alone a rich lure of espionage and flirtation soon taken up by the darker hues of bass and the melodic entanglement of guitars. A warmer hug comes through the synth of Kenneth Eknes who features across numerous tracks within the album, the song a calmer engagement compared to those before it but again the organic volatility within the band’s sound adds to its drama and adventure; its energetic infectiousness sparking thoughts of Modern English as its psych/shoegaze nurtured enterprise hints at the likes of Jesus & Mary Chain and House Of Love.

The instant rhythmic drive of Ludwig Meidner had us greedily hooked, the quickly surrounding smog of melodic and vocal insinuation building the fascination until the song is a thick almost concussive but invigorating engagement. The dark grumble of the bass is delicious alone; its post punk inclinations an infection to which the band only add further virulence in voice and sonic endeavour while the following   Never Turning (In Time) breeds a tenebrific seduction from its cinematic opening which enthralled as it subtly devoured. The track proved pure temptation, a dark haunting again where beauty and jeopardy collude.

Across the equally sinister Sacred Core and the crepuscular romance of The Night Before a form of addictive captivation with Prepared For A Nightmare only grew closer; the first of the two bordering on the radiantly nightmarish as the second seduced with its own Gene Loves Jezebel hued serenade while Goldmine straight after illuminates a shadow hungry dance-floor with its animated but still rapaciously intense trespass. An electronic effervesce underlines the denser touch of the song yet everything about the drama and opaque climate of the track is inescapable catchiness.

A Future Promise is another where dark intrigue oozes from every note and syllable, guitars and bass alone weaving a darkly intimating theatre within the brighter dye and optimism of the keys. As with all tracks the imagination is fuelled with an adventure to build upon, ears soaked in a bewitching sound setting Mayflower Madame apart from the rest as finally endorsed by album closer, Endless Shimmer; a song which gently radiates upon the senses as it enraptures ears and thoughts.

It is a bewitching end to an album which had us embroiled in its tantalising breath and creative web from start to finish and with greater lust by the listen; Mayflower Madame surely casting a lure to major attention.

Prepared For A Nightmare is out now digitally via Only Lovers Records @ https://mayflowermadame.bandcamp.com/album/prepared-for-a-nightmare with its vinyl and CD release on May 15th in collaboration with Portland’s Little Cloud Records and Parisian label Icy Cold Records.