The rumour is that UK metallers Atarka are a band to keep a close ear upon with no better opportunity coming than through their just released debut album. The suggestion coming our way was that the band was very much like the protagonist of their full-length’s title, a mighty beast ready to stir and take on the British metal scene and after devouring the Sleeping Giant we can only agree that the potential and imagination offered has all the ingredients to break major attention.

Hailing out of Birmingham, Atarka was founded by guitarist Daniel McCarthy, bass player Adam Bayliss, and vocalist Jamie Smith. 2018 saw its current line-up completed with the addition of guitarist Alex Dutton and drummer Phil Sheldon and continuing to build on the local success quickly found with their dramatic and fertile fusion of groove and blackened death metal. As their first album proves, there is plenty more at work around that creative seeding and within Sleeping Giant it makes for a mix which gives ears, neck muscles, and enjoyment a strong workout.

Embracing themes of “history, mental illness, addiction and other aspects of the human experience” while sonically illustrating a “bleak and desperate view of history”, Sleeping Giant leads ears in with its title track. A melodic shimmer of guitar initially coaxes the imagination, its worldly breath rich intimation even as the track’s climates hints at the darkening outlook to come. It is a brief and seriously magnetic evocation quickly devoured by the might of The Bastard. Immediately appetite fuelling grooves wind their lures around ears, the guitars of McCarthy and Dutton enslaving sure attention for the throat abrasing roars of Smith to unleash their intent upon. There is a controlled urgency to the rhythms and attack of the song but no escaping the predatory intent of both or the sonic enterprise escaping guitars and imagination. 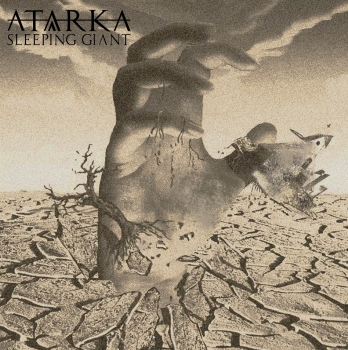 It is a superb full start to the release which Tollund Man cements with its similarly considered but imposing stride. Bayliss and Sheldon harry and assault with skilled tempestuousness echoed in riffs and grooves let alone Smith’s caustic delivery but magnetically tempered by the subsequent melodic wiring woven by the guitars. At times the song relaxes its animosity to further beguile but it only seems to invigorate its returning uncompromising trespass as another compelling moment is unleashed.

Golden Snake follows and again does not hold back in springing delicious grooves upon the listener to chain attention before burrowing further under the skin with sonic nagging and rhythmic dexterity. For the first time Smith reveals his impressive clean tones, a switch which only accentuates the prowess of he and the track’s mercurial individuality before Miasma equally harasses and captivates with its blackened heart and grooved instincts. Again the blend of vocal contrasts accentuates the strengths and enterprise of a song which maybe did not quite grip us as tightly as those before it but undoubtedly added to the growth pleasure inspired by Sleeping Giant.

A hint loaded melodic calm before the storm opening to The Tempest ensured ears were again firmly held and in keen anticipation of the deluge to come, one retaining its sonic craft and imagination even as voracious grooves spark and provoke a toxic turbulence. The tempestuous nature of the song is only further escalated by the twists of relative calm and melodic fire which breaks the sonic corruption, the track more compelling by the second even if still being eclipsed by the uncompromising verging on feral presence of the outstanding 731. Even so, it too is wrapped in spirals of venomous and invigorating grooves which seem to inflame rather than temper the dark intent led by Smith’s rabid tones and the ravening incursion of rhythms.

The controlled shuffle of next up Nebula is soon clouded by the just as inviting groan of Bayliss’ bass, the evolving melodic scene courted by dark atmospheric hues and shadows before the track expands into a dense and enveloping realm as melodically radiant and captivating as it is corrosively invasive while the following Shadow of the King remains in that kind of mordant climate as it weaves a portrait of majestic malevolence and ravenous violation with a manipulative imagination and surprise giving craft. Unpredictable and ferocious, the song is maybe the most unique and riveting moment within the release, certainly another major moment greedily devoured.

The album ends with Delacroix, an epic conflict of light and dark where melody and sonic black heartedness tantalised and seized the senses across one dramatic body. It is a powerful close to a release becoming more fascinating and compelling with every freshly revealing listen. It is easy to suggest that Atarka is indeed a Sleeping Giant with all the elements available to see them rise to lofty heights, their debut an impressive stirring in the start of that journey.

Sleeping Giant is available now on all music platforms and streaming services.