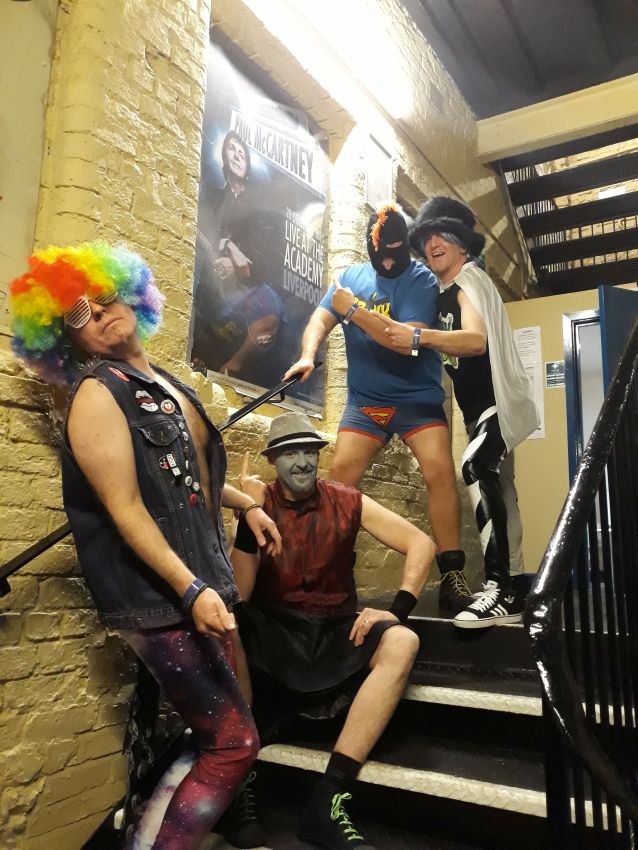 As a certain virus continues to overwhelm lives, society and the world, moments of feel good interjection can only be hungrily seized upon or in the case of the new Dirt Box Disco album, greedily devoured. The release gripped from its first breath and swiftly had the body bouncing with rapacious energy, all the while simply confirming DBD as UK’s maybe even the world’s finest rock ‘n’ roll band.

Step into TV Sex Show and unsurprisingly, if already a fan, you find a horde of tracks which arouse and incite with mischievous intent. The album is a raucously anthemic assault on apathy and despondency, a ‘go get ‘em’ insistence fuelled by the band’s inimitable punk rock bred sound which even in this moment of global self-isolation will get you at the very least hollering at the world from within any confines. As proven by previous releases like its predecessor, Immortals, the band’s sound even with its familiar individualism continues to grow and embrace; TV Sex Show uncaging Dirt Box Disco’s fullest, broadest and richest skilled cacophony of devilment and flavouring yet.

It is also the first encounter with the band since the departure of singer WEAB.I.AM, a change which raised intrigue but not panic as guitarist/songwriter Spunk Volcano has embraced the frontman role now something he has already proven magnetically accomplished in with his own solo project, Spunk Volcano and The Eruptions. With drummer Maff Fazzo, lead guitarist Danny Fingers, and bassist Deadbeatz Chris again unleashing their own esurient craft and revelry too, all three as motivating in their backing vocal roars, Dirt Box Disco grabbed ears and rock ‘n’ roll instincts from the first surge of TV Sex Show and not for the first time left us breathless and ridiculously grinning by the album’s final breath.

The release opens up with Unstoppable, Dirt Box Disco announcing and declaring their intent and defiance with the band’s combined vocal lure an immediate spark for personal vocal chords to unite in, the first round of solidarity quickly followed by a contagion of riffs and hooks aligned to just as virulent rhythms. With the same creative and catchy swing in Spunk’s vocals, the song had the body and spirit flinging energetic shapes and emotions like a master puppeteer.

Further ignited by Danny’s melodic wiring, the track is an exceptional start to the album which the following Insomniac ensures never drops with its heavier, more predacious punk ‘n’ roll. Relentless in its rhythmic harrying, incessant in cantankerous riffery and primal grooving, the song had us shouting with knowing unity while Barebones from its initial sonic nagging and rhythmic jabbing soon insisted and received similar participation in its punk nurtured call out.

A moment of intimate reflection or personal observation, I want out in many ways echoes the situations we find ourselves in right now as well as experiences all have felt at some point in time. Its calmer gait and energy still has a tempestuousness which equips the infectious chorus which DBD for years have proven so crafty at igniting listeners with.

Dickhead and the hype is next up, its punk rock meets hard rock swell pure anthemic encouragement refusing defiance, though great and addictive as it swiftly proves is still outshone by The Count of Monte Cristo lives in San Francisco. It’s initially reserved but still highly catchy saunter through ears is almost a tease of things to come, a hint to the voracious virulence which soaks another chorus only the deaf may be able to resist. That opening stroll returns and continues to light up attention between the surges, its melodic luring sparking the imagination before those eruptions grip throat and body.

The old school seeding of Reminisce got under the skin within seconds, the track brewing another potent fixation with something of a Vibrators meets UK Subs meets Mud lining to its still DBD individuality, the same agility easily said of 3 bottles down which again from a calm reflective opening brews an incitement which nags as much as it inspires full and eager involvement.

As often with relish, DBD turn the spotlight on a certain type of character we have all come across through Bitch full of stitches, a track which had us rocking with the kind of zeal its protagonist frequently shares in their own way with Vdtv for a minute and a half bitch slapping the senses while equally inflaming them with primal punk rock predation. It is a relentless assault built on the individual prowess of the band and their united contagion, a unity just as impressive and manipulative within successor Simple but effective. A middle finger parading response to ‘the haters’, again body  and vocal chords as well as spirit were keenly slung into the song’s vociferous yell and once more TV Sex Show proved itself irresistible.

The truly magnetic Ain’t life grand completes the line-up of pleasure, its intimacy as open as its gentle but persistent infectiousness. Grab the CD version of the album though and find the added pleasure of two bonus tracks in Tizwatitiz and Wake up. The first of the pair is another pure punk rock nurtured surge of temptation wired by many other flavours, its voracious instigation of eager complicity prime DBD while the second is a slab of rock ‘n’ roll contagion owing as much to the likes of Showaddywaddy as the seventies punk instigators it also hints at in its feral punk ‘n’ roll clamour.

So that is TV Sex Show, another glorious riot with Dirt Box Disco which leaves spirit and body ready to take on any challenge and pleasure boiling over. I am sure we have said this before with a DBD album and probably a few times but this might just be their finest moment yet.