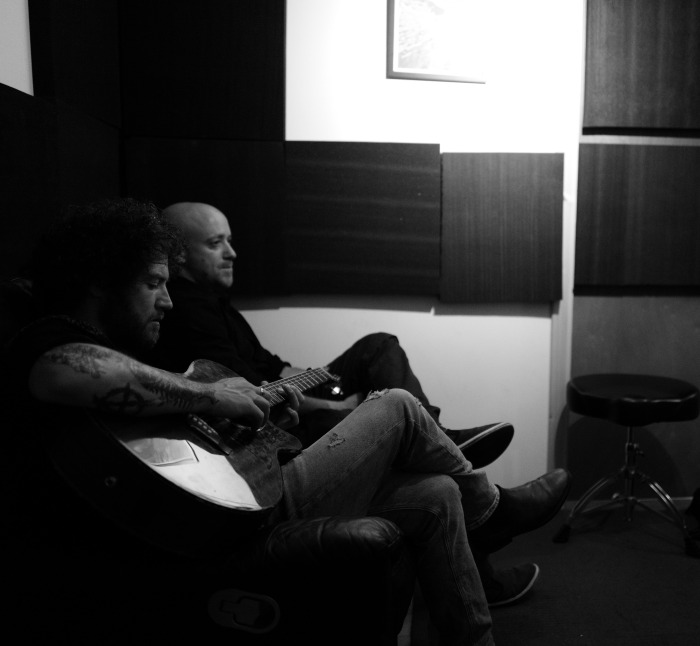 Hi and thank you for sparing time to chat with us.

Could you first introduce yourself/the band and tell us how it came to be?

PB – I’m Paddy Bleakley, from El Misti. Me and Kieran Gilchrist met in Rio de Janeiro in 2010. We had numerous beverages, a jam on the beach, wrote a couple of songs and recorded them in a studio there in a matter of days! Lord knows where those recordings are now…or just how terrible they sound. We got together and went our separate ways a few times in the intervening years. At the moment, we live next door to each other and we have a studio above the bar that I own…which is next door again. All very incestuous really. We got together with Mike and Rory about 9 years later, but me and Mike have been friends for a fair while and have always been meaning to do some work together. He actually used to work at the bar. What a barman that guy was!

KG – Yeah me and Paddy have been through a few different incarnations of making music with various setups and people but we’re pretty self-critical and never really thought that anything we’d self-produced would add enough to what was already out there. Paddy’s bar, Kash 22, has brought some special musicians into our sphere and we’ve been very fortunate to have Mike and Rory, who were connected to the bar, as part of the project.

How would you define not only your sound but the creative character of the band?

PB – Our sound is just us. The four of us, as the core for this record, all come from very different places musically. The songs are already written before we start so we just get in a room and play them and stuff happens. Rory has to take a lot of credit for the actual sound though. The boy’s got proper ears.

KG – As Paddy says, the overall sound is the 4 of us in a room, plus Rory’s sonic wizardry in the studio. We all come from quite different musical backgrounds and are involved in other bands and projects but have a lot of common tastes which unite us musically. It was never going to be a one-genre album, that’s for sure. In fact, you could probably say some songs in themselves don’t even stay in the same genre.

Are there any previous musical experiences for band members and how have they been embraced in what you do now?

PB – I’m sure Rory’s other production work and the bands that Mike’s been in have been influential. Personally, I just feel I’ve always just been waiting for this to happen. Kieran’s had a much more interesting musical journey than me though.

KG – I spent 2 years travelling through Latin America recently and played with a mariachi band in Mexico and a Cuban street band in Santiago de Cuba. I’m really into dub reggae too so the Caribbean kind of felt like a pilgrimage to me. I suppose it would be hard for some of those syncopated rhythms not to have come out on the album, but it would be hard to say exactly how and where.

Is there a particular process to your songwriting?

PB – As far as the writing goes, that’s a pretty private process. But then the band get involved and they help me make sense of it all really.

KG – Paddy very consistently brings complete songs to the band but opens it up to the room. I am generally the first person to hear them so I add some riffs and help with arranging a bit. The band tends to try a few different feels approaches and the best rises to the top.

Would you tell us about your upcoming self-titled album?

PB – It’s our first release. It’s been a long road but we’re pretty proud of it.

KG – Yeah, it’s been 10 years and lots of things have got in the way but we were both determined to make it happen one day and here it is. We’re big fans of the concept of an album as a story and we enjoy listening to whole albums, in what is now kind of an old-fashioned way. We always wanted to be able to make one of our own and thankfully these days, that’s a lot easier.

What are the major inspirations to its heart and themes?

I am always intrigued as to how artists choose track order on albums and EP’s and whether in hindsight they would change that. What has been the deciding factor for you or do songs or the main do that organically?

PB – It was all pretty organic. I for one am a big believer in the album as a medium for expression. You can get much more across in ten songs than you can in one. All the songs speak to each other so the order just kind of revealed itself early on.

KG – Yeah, as Paddy says, in the end the order pretty much wrote itself.

What do you find the most enjoyable part of being in a band and similarly the most cathartic?

PB – Music is cathartic by its very nature and there’s nothing more enjoyable than being in a room with your mates making it.

KG – Yeah, that live creative process is the most rewarding.

For anyone contemplating checking you out live give some teasers as to what they can expect.

PB – I will endeavour to remember all the words.

KG – I will endeavour not to start a fire with my constant involuntary musical gesticulating.

What has been your most thrilling moment on stage to date?

PB – Personally, the thrill for me is in completion of a song.

KG – Playing with a mariachi band in Mexico was pretty special.

Do you have live dates coming up?

PB – We’re doing a release party for the album in my bar, Kash 22 in Frodsham on 24th March. Our mums will be selling the merch! Hoping to do a little tour later in the year, but more importantly we’re getting back to work in the studio.

What else can we expect in the near future?

PB – We’ll have another album out this year…maybe two.

What are the major inspirations to you sound wise and as a musician?

PB – Again, experiences. Also, background. I grew up in a house surrounded by music. Dad was always playing guitar and Mum singing. My sister is proficient on numerous instruments. There was always music playing. A lot of Celtic stuff, folk, country. I inherited my Bob Dylan and Van Morrison obsessions from my parents. Meeting Kieran had a big influence on me as a musician. I’ve also learned a lot by just playing with different people. There’s no substitute for that!

KG – Growing up in Toxteth, Liverpool, and around the Lark Lane area, I was exposed to a lot of sounds with international influences. My mum had great taste and had a big social circle with a good music scene, so there were lots of house parties and festivals we went to, and I was definitely infected by a lot of that.

And finally, what song or release would you say was the spark to your passion for music?

PB – A lot of the old records that were actually released before I was born. When I first heard them, they were completely new to me.

KG – Some people seem to have that eureka moment when they hear one record but, for me, music was something special from a young age. My spark has always come from the people I know – none more so than my uncle, who introduced me to guitar and the classics.