Suckers for idiosyncratic hooks, irregular rhythms, and drone back grooves which nag their way into the psyche, it was inevitable that the new EP from Chicago hailing trio, Engine Summer, would have us dangling from its aberrant antics and warped imagination like a dysfunctional puppet and lusting after every second time and time again. Back-Street Boys is manna to the anomalous freak in us all; a collection of tracks seeded in the deviancy, irreverence, and contagion of the finest post punk, psych rock, and indie eccentricity known to man but a gathering breeding the kind of uniqueness which keeps us lustfully lost in the grip of music.

Consisting of Jeremy, Benny, and Ry, Engine Summer formed in late 2016 and quickly made a potent mark on the Chicago live before venturing further afield with two tours of the East Coast. Sharing stages with the likes of for Ra Ra Riot, Bodega, Acquaintances, and Baked along the way and a pair of EPs as well as their debut album has only cemented their reputation for creating apologetically catchy but maverick songs which linger long after their arrival. Back-Street Boys is the successor to their acclaimed Indiana EP, one “piggybacking off” their 2019 Dion Lunadon of A Place to Bury Strangers mastered predecessor to breach a whole new plateau of Engine Summer pleasure. 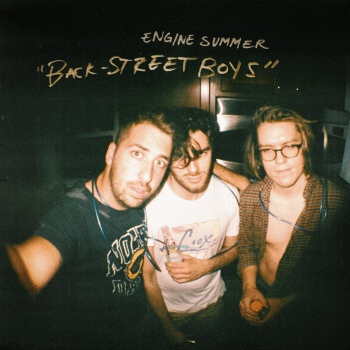 Their new offering is bookended by the band’s previously released singles, Carol’s Dead and Night School, an entrance and departure which is worth the effort of digging into Back-Street Boys alone. The first of the two more taunts than invites attention with its initial resonating throb of bass and lure dangling guitar but with the same impossible to ignore intrigue at its core. As tenacious beats increasingly swung their manipulative bait and the band’s twitchy vocals united in a just as lively and devilish static dance on the ears, the track enslaved as it stomped around with irresistible dynamics and attitude. Teasing with essences reminding of bands such as Gang Of Four, Artery, and The Fall across its more forceful individuality, the song is glorious and one of the best tracks of the past decade.

Night School similarly proved why its great success as a single, its stroll less boisterous but just as persuasive as nagging chords and persistent rhythms aligned to orchestrate instinctive movement and further hunger for their atypical exploits, Each are feasts for any with a post punk and krautrock nurtured appetite and fair to say that in between, the two tracks the enticement proved just as addictive and galvanic.

Suds follows the EP’s first track, quickly laying out its own web of spiky hooks around motion chivvying rhythms. Like a hybrid birth in a contorted fusion of The Fire Engines, Swell Maps, and We Are The Physics, it like its predecessor had us wrapped around its sonic finger before Under the Sea leapt in with an indie pop dance within a psych punk cage of compulsion to equal have us drooling.

Groovin’ on 63rd marries the renegade of eighties post punk with a similarly aged new wave devilment before embroiling it in the band’s freak bred imagination, a garage punk breath only adding to its funky disposition while Likes saunters along with a meandering Melvins-esque smile to effortlessly worm under the same skin its predecessor had already breached.

Completing the line-up is Spice Boys, a psych pop serenade as sublimely infectiously in its harmonic charm as it is in its darkly contrasting rhythmic canter. Adding yet another shade of imagination and flavouring to the release, the track seduced as it coerced; its intoxication epitomizing the fascination and distinctive enterprise which makes Engine Summer one seriously hypnotic band and the Back-Street Boys EP their finest moment yet.