From its evocative title to the intimacy of its heart bred lyrics alone, the new EP from US indie rock outfit Morning Bells makes for a richly alluring proposition and bound in just as provocative and arousing sounds Fall From The Velvet Sky quite simply proved one richly compelling encounter.

Hailing from Raleigh in N. Carolina, Morning Bells began with the creative union of drummer Bryan Fransman and long-time friend, vocalist Ric Denton. Swiftly the emerging band grew as bassist Laura Weislo was enlisted by the duo with in time guitarist Emory Ball and keyboardist Peele Wimberley completing the quintet. Their sound is said to embrace inspirations ranging from Johnny Marr, Television, and The Gun Club to The Smiths, Yo La Tengo, David Sylvian, and Talk Talk alongside for us upon their first EP a certain R.E.M. scenting. 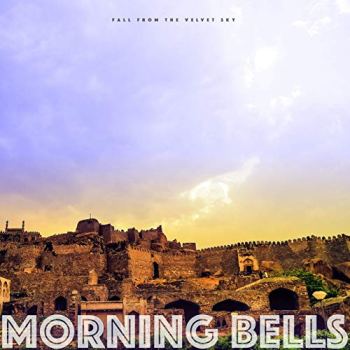 In saying that, the opening track of Fall From The Velvet Sky has a thick dark creative breath which reminds of Scottish band, The Filthy Tongues. The initial melodic glisten of Ghost Story is soon descended upon by emotive shadows, keys and rhythms united in their gothic intimation even before Denton shares his equally suggestive tones. The psych rock breath of those keys continues to light the haunting embrace of the song, its reflective stroll a prowling instigator on ears and imagination.

The track is superb remaining our favourite moment within Fall From The Velvet Sky with relative ease though its companions like the following Through The Dark are no less potent in their captivation and creative incitement. As its predecessor, the EP’s second track immediately enticed keen attention with its first melodic touch, guitar and keys swiftly engaging the senses before the shadowy lure of rhythms and Denton’s ever magnetic tones and words escalate the enticement. The bewitching serenade of the song simply had us hooked before The Truth Is matched its success with its own absorbing temptation. Pop and rock traits entangle within the captivation woven and addiction bred, thick fascination spawned in the web of sound and voice.

Next up, The Night You Touched My Hand shares an eighties indie pop seduction in its melodies and nineties rock rapacity, a fusion further invigorated by volatile urgency and touches with the result another track which just got under the skin and had us hooked and involved in swift time.

The EP concludes with Tonight; a track which maybe did not quite match up to its companions yet had ears eagerly held and our pleasure in full flow as Fall From The Velvet Sky completed its beguiling adventure. It is a release which quickly and increasingly impressed and aroused, thoughts soon relishing the band’s own imagination us eager anticipation blossomed for the next fresh creative resonance from Morning Bells.

Fall From The Velvet Sky is out now; available @ https://morningbellsband.bandcamp.com/album/fall-from-the-velvet-sky