Home › Music › The Beauty of Noise: The Gaa Gaas Interview

The Beauty of Noise: The Gaa Gaas Interview

As a fresh decade takes its first breath there was only one place to start a new series of interviews with some of the most exciting independent bands and artists and that was with one of our major faves here at The RR. So with big thanks to band founder Gavin Tate welcome to The Gaa Gaas…

Hi Gavin and thanks for sharing your time with us once more.

It has been a long while in the planning but you have just unveiled the band’s debut album. What have been the prime emotions in its build up and now final and highly anticipated release?

GT: Bonjour, mettez-vous à l’aise. The honest truth is that as well as the unfortunate circumstances of label battles, finance was a huge factor for the reason it took so long to release a full album. I was abused as a child at a detention centre in my home island of Jersey where I was illegally locked up in solitary confinement for sometimes months at a time and was beaten. I received a big compensation from the Government that I’ve put into the physical side of the album release out on our own label Movement-2 Records. It’s a fantastic feeling to know the album is finally out there, the response has been amazing!

For those new to The Gaa Gaas could you reveal how the band began and its history since?

GT: I attended a tour in 2002 that consisted of 3 pinnacle groups of the time which were Ikara Colt, The Eighties Matchbox B-Line Disaster, and The Parkinsons. That show in Brighton inspired me to form The Gaa Gaas made up of members that I had met at a club night called Bomp! (a weekly event that was held in our birth town of St Helier). The band relocated to Brighton in the mid 2000’s and we’re now mainly based in London. Prior to the album we had released two 5 track EP’s, a few singles, a couple of split singles and have been featured on many compilations since! We have also been given the opportunity to play some big name festivals alongside bands such as Noel Gallagher’s High Flying Birds, Primal Scream, The Stranglers, Happy Mondays, and Richard Ashcroft.

What were the inspirations which most sparked your own musical adventure and also the band’s sound?

GT: I think a lot of it was to do with attending gigs and festivals. I always wanted to be on stage and behind the scenes because that side of it felt more appealing to me when I was just a young lad. The sound of the group has been developed and matured through observation and experimentation. We love lots of different styles and even though this band has had many members over the years, we’ve still managed to maintain the same sound throughout. It’s post-punk more than punk, but can still be classed as rock. We’ve stayed true to our name by making it a bit nutty as well.

Turning back to the album; a powerful collection of songs to tempt newcomers it also in a way works as a round-up and compilation of the creative adventures existing fans have devoured over the years. How did you approach it to make it strikingly fresh, which it is, to all?

GT: There was the option to record the album with completely new songs and leave what we had already done behind, but our fan base would have been completely thrown off as songs like ‘V.O.L.T.A.I.R.E.’ and ‘Close Your Eyes’ are strong enough album tracks. It was decided to have our previous singles included on the release along with the best tracks of both EP’s and a studio outtake that we well and truly underestimated titled ‘The Type of Mood’, which has had the most radio interest, something we never expected at all. ‘Indian Giver’ album version was kept behind as we knew we wanted it for the release and it works being the only instrumental on the menu. No one counted on it and that’s what we wanted. We’ve now created more anticipation as the next album will follow up in 2020 with songs no one has yet heard and I tell you hand on heart, the new stuff wipes the floor with anything we’ve done before.

It does feel like the closing of a chapter before The Gaa Gaas unveil a new adventure ahead, is that how you see it in some ways?

GT: We’re not the most organised band in the world, but we make up for that with enigma. No one ever knows who’s actually in the band as every time we play live there’re always new members. We are like today’s equivalent of The Fall. Not by choice either. Maybe I’m a difficult person to work with, maybe they are. Also we’ve had some almost fatal hardships within the group that has led to cancellations of planned shows and tours. Every band goes through bad experiences, but you just have to soldier on. The new decade will see us actually jumping in vans and doing the circuit again, something our fans have been really gunning for, and plus with the new material it will be like a complete reincarnation

Obviously some of the songs within the album were written way back, are you someone who has had the self-will to leave them alone or over the years have found yourself nagging away at them 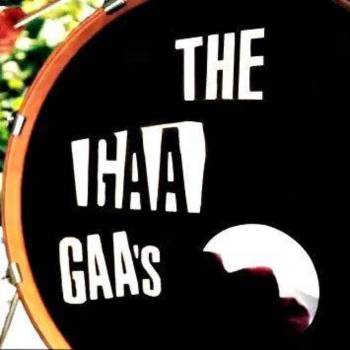 GT: I just think those songs really deserved to make an album. I’d love to see our first record stacked alongside stuff like Damned Damned Damned and Never Mind The Bollocks in the bargain shelf at Wax Factor Record Shop in Brighton one day. That to me would feel like more of an achievement than seeing it in the racks at Rough Trade. Everything’s too polished these days. We are as true to punk rock as the innovators and that attitude in music needs to come back hard ‘cause the industry is mostly made up of rich geeks and there’s no flare like there used to be. I believe those songs carry some of that old skool sensibility!

As you mentioned the band has been based between Jersey, Brighton and London over those same years, putting aside now with the album’s release, which has been the most potent moment for you in The Gaa Gaas emergence?

GT: I think the release of ‘V.O.L.T.A.I.R.E.‘ was monumental to the band. As soon as that came out we were getting booked to play everywhere…The coolest club nights throughout the UK and Europe, being played on Radio 1 on MTV 2. At that point I thought we were going to explode as Island Records were interested and we were playing shows every week. But it’s like anything. People inside and outside of the group had misconceptions and doubts about where it was all going, but I’m still on that boat of the best is yet to come.

Have you found that it has become easier for a DIY fuelled independent band to find opportunities to play and find a release for their art or harder?

GT: Groups such as The Cramps did everything themselves. Pressed their own records, designed their own fanzines, organised their own shows and tours. In the end the best thing about that is you’re not owing an advance to any labels. DIY and the independent side of the business is where most of the bands and labels we all know and love first began, but inevitably everything gets snapped up by the majors because people need money for bigger projects, for security, and a lot of the time for their own Cocaine fuelled ego’s. Not needing to be under anyone’s wing or supervision is no chore to us. We would quite happily carry on independently until our livers pack in, our lungs collapse, and our nostrils fall off. Even then we would probably still keep going!

And how hard has it been to keep the passion and determination going in making music across the long life of the band?

GT: The great thing is people never know what to expect from us. Maybe that forms some sort of excitement in itself. Music is always being written and recorded. There’s so much that has never seen the light of day and now that we have a functional record label of our own we can look at more frequent releases. We are going into the new decade with a much more experienced head on our shoulders. As well as for our own passion and our own urges, we would really love to put Jersey on the musical map of producing great bands in the same way The Parkinsons did for Portugal.

I know there are new songs poised to bring bold new Gaa Gaas adventure to UK music; can you give us some idea of what they will reveal?

GT: If you enjoyed the political vision of ‘Close Your Eyes‘, let’s just say the 2nd album will hold more of that fire. We are going more electronic the next time around massively influenced by Ultravox, but also taking inspiration from greats such as U.K. Subs and The Damned, also stuff like Tool which I’ve only really just adapted to thanks to our new guitarist Simon. The next wave of songs will be a massive step up from what anyone has previously heard. That’s all I can give you!

So what is on the horizon for The Gaa Gaas live and recording wise?

GT: Our first show of 2020 will be a headline slot at 93 Feet East in London’s Brick Lane as a release party for the first album with support from some of our current faves. Robert King of legendary Scottish post-punk band Scars will also be DJing. From then on we’ll be playing constantly the same way we were this time 10 years ago. The live shows are where it’s at with this band. As soon as we came off at Weekender Festival last year, we just wanted to do it again and again. We were tempted to over step Stereo MC’s slot, that’s how much we enjoyed it. As for recording the next venture will be album number 2.

The Gaa Gaas have been a band which has perpetually excited us at The RR, is there a particular moment which has given you the biggest satisfaction and pleasure in its time to date?

GT: I think it would have to be performing at Drop Dead Festival cause it was the furthest we’ve ever travelled to play. Right on the outskirts of Russia and we got billed alongside bands such as Zounds, Specimen, Sex Gang Children, Noisy Pig, and Stereo Total. It was an honour to be invited to play at that event. We still can’t believe we made it there in one piece.

Again big thanks for chatting with us, anything else you would like to add?

Please donate anything you can to Crisis UK and get behind the Musicians Against Homelessness campaign organised by Emma Rule. Let’s try and get Britain back to a much better state by forming unity and becoming a more humane place to live.