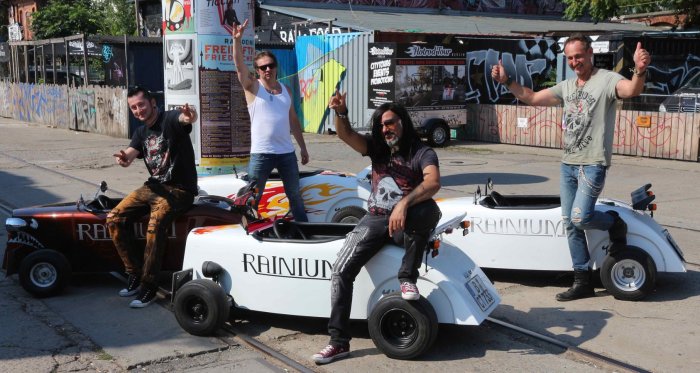 Having thoroughly enjoyed their new single, the offer from Rainium themselves to check out their debut album was easy to take up. So with thanks and help to guitarists Rainer Krenzke and Jay Parmar we did just that and discovered in Sounds Of Berlin another of this year’s pleasures.

Rainium is an Anglo/German endeavour created by Krenzke in 2017. With a swift link up with vocalist Michael Voss (Mad Max, Casanovo, ex-Bonfire), the emerging project was soon the host of new songs, demos, and a line-up subsequently completed by bassist Marco Tardanico (ELA) and British lead guitarist Jay Parmar (Eden’s Curse, Iron Knights, The Inner Road). Musically, Rainium weave a sound bedded in a fusion of classic and hard rock and alive with individual craft. As that first single and its title track revealed, the album revels in a blend of familiar and wholly fresh ingredients though across a dozen tracks Sounds Of Berlin quickly and firmly unveils a far richer adventure of sound and enterprise.

The brief attention luring invitation of ET (Et Toujours) leads eagerly into the waiting arms of Two Friends which welcomes ears with big swinging beats amidst rapacious threads of guitar. Quickly it opens up a web of melodic threads and vocal incitement, both as persuasive on ears and body as the continuingly infectious rhythms. Edging on the side of snarling, riffs drive the song’s catchy stroll whilst the melodic prowess of Krenzke aligns with Parmar’s skilled intricacies and invention until it all rousingly unites with the anthemic incitement of the band’s combined vocals.

It is a potent start to the album which the band’s current single wraps itself as it shares its own individual enticement. From the enclosed theatre of the subways, Sounds Of Berlin hits its catchy stride with a boisterous appetite, setting up classic rock nurtured riffs and hooks in a catchy and tempting embrace at the same time. Tardanico’s bass throbs magnetically under the song’s skin as Parmar’s stylish weave wraps a body teasing with almost industrial hued flavours at times though its chorus is pure eighties rock natured. 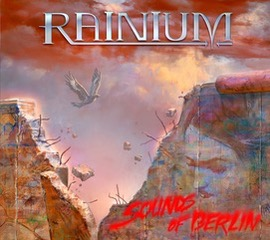 In The Dead Of Winter strides in next, confident in its temptation and indeed it takes mere seconds to get under the skin as rhythms pounce and vocals hook. It is a wicked start which softens a touch as its equally contagious chorus shares keen energy, the cycle just as virulent the second time around. With Parmar again enthralling in his craft and enterprise, the track lays down a strong best track claim before Farewell slows things a little but adds greater intensity and emotion in its metal infused canter. Melodically haunting as drama lines every moment entangled in the emotive intimation of the guitars, the song makes for one of the album’s most absorbing moments.

Another big highlight of the release comes with Right Here Right Now, a song which starts with almost predatory intent as its initial riffs strike but soon simply seduces attention as the instantly captivating tones of Ilo Schnittchen (Isle Of Rock) nestle in the melodic embrace of the song. With rousing eruptions in the heart of the temptation, the track proved increasingly irresistible and firmly one of our favourite moments.

Both Just The One with its open nineties rock seeding and the wild almost salacious antics and suggestiveness of Gypsy had the body bouncing if neither could quite rival the success of its predecessor while Wake Up stakes its own claim on one of the album’s major moments with its prowling intrigue and drama. From the compelling throaty lures of Tardanico’s bass to the subsequent almost new wave nurtured melodic captivation which wraps the imagination, the song enthralled and embroiled us in its gentle swing.

With Parmar’s steel strings as poetic as ever, it is a fine close to the collection of seriously engaging and forcibly memorable songs though Sounds Of Berlin still has the pleasure of three bonus tracks to please ears with. The first is another version of Right Here Right Now which sees Schnittchen and Voss in more of a duet across its highly magnetic body, its treat followed by an instrumental demo of In The Dead Of Winter and a demo take of Just The One.

From the moment an idea, which was to become Rainium, escaped Krenzke’s imagination it has been three years of inspiration, passion, and endeavour from all members, traits shaping and fuelling a release we can only suggest needs a lusty checking out.

Sounds Of Berlin is available now.