UK hailing Unhappy Fly is described as a post punk and no wave supergroup but trust us that description of their sound is like simply calling the sea blue and vegetation green. As their self-titled debut album quickly reveals, every song from the quartet is a tapestry of flavour and temptation as diverse and vast as the landscape of those previously mentioned features of planet earth.

Across its eleven tracks every second of the Unhappy Fly album is a theatre of sound and drama woven from everything around that post punk/new wave intimation to folk, jazz, baroque, indie and rock and still we are missing a plethora of other spices in its creative recipes. The resulting fusion is brought with unapologetic pop instinctiveness as Unhappy Fly share one of the most enthralling and captivating moments of this year indeed of many before it and no doubt to come.

Unhappy Fly is the compelling coming together of vocalist/guitarist/pianist Xentos Fray Bentos and drummer/percussionist Richard Dudanski with musician/electronic instrument builder/vocalist Sarah Washington and saxophonist/flutist John Glyn. Those familiar with the four and especially the first pair will know of the varied experiences and adventures in their extensive musical histories yet it gives no real clue to the uniqueness of the Unhappy Fly album.

There is a pop perfection to every song within the release, each bringing a manipulative bounce and catchiness upon ears and body whilst weaving proposals as rich in styles and textures as a dressmaker’s wardrobe.  Now Alasdair Owns Me opens up the album and swiftly unveils its character of imagination and craft and the virulent temptation which flows through the release. Its gentle entrance on rhythmic coaxing amidst melodic strands is pure delight as too the soft tones of Bentos which as quickly tempt away. The song was already under the skin before it then erupted in pure animated and thickly assorted contagion. Few albums this year have made such a magnetic start as Unhappy Fly’s yet it is just the beginning of the bold adventure to come. 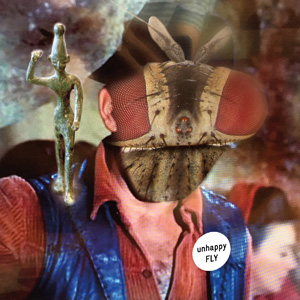 Boneyard follows and as its rhythmic pulse teased ears it too soon buried itself deep especially through its guitar spun hook. Melodic entangling of appetite continued to spread from the catchy heart of the song, keys adding a crystalline glamour as Glyn’s sax teases with relish. Infectiousness soaks every note and syllable, its mellow aside as thick in imagination and temptation as the rousing swing of the tracks persistently encouraging body. Such the majesty of songs it is hard to pick a firm favourite but this has a firm hand on the decision though successor Superfifcial does its best to muddy the waters with its flirtatious teasing of sound and Bentos’ inimitable ever enticing vocals presence alongside Washington’s similarly beguiling tones. Everything about the track is simple yet skilfully conjured and offered for two and a half minutes of pure pop pleasure.

The cosmopolitan tango of Holocene provides a jazz scented enticement which is again nothing less than full seduction, its funky breath and jazz folk hues an infestation of the imagination alone before Feet of Clay embraces the listener in a theatre of musical intrigue and stringed drama. Shadows and whimsical mischief equip the track’s irresistibility, a mandolin and richness of vocal dexterity accentuating its power and beauty.

Latest single, Electric Light is next and immediately had ears greedy and the body bouncing through its exuberant almost voracious catchiness. It is a pop song though unafraid to twist and turn through jazz lined surprises and fresh shades to its instinctive creative ebullience for one of the best three minutes heard this year.

Country bred sighs welcome Angry In The Head, continuing to colour its catchy swagger and emotive plaintiveness while Singing Flame and Hit ‘n’ Miss after it only ignite further pleasure being side by side with the release. The first has a sixties pop croon to its tenacious shuffle, Bentos and Washington providing a seriously magnetic vocal union against the gorgeous rhythmic manipulation of drums and bass, it all within a weave of sound which becomes more varied in flavour and dexterity by the second. It’s equally enslaving successor similarly has that nostalgic breath yet is all fresh and innovative in its diversely bred pop ‘n’ roll stroll.

The final pair of Big Picture with its fifties inflamed, seventies glam tinted rock ‘n’ roll and the moment of undiluted rapture that is Golden ensure the album leaves as memorably and hypnotically as it began. Both are as individual in presence as they are united in fascination and the inimitable prowess of their creators.

The Unhappy Fly album is a wonder of beauteous melancholy and shadow enhanced beaut. It also proved, to use the word again, pure rapture upon these ears and it is hard to feel we will not be alone in finding a greed for its thrilling adventure.

The Unhappy Fly album is out now via Emotional Response Records; available @ https://emotional-response-recs.bandcamp.com/album/unhappy-fly