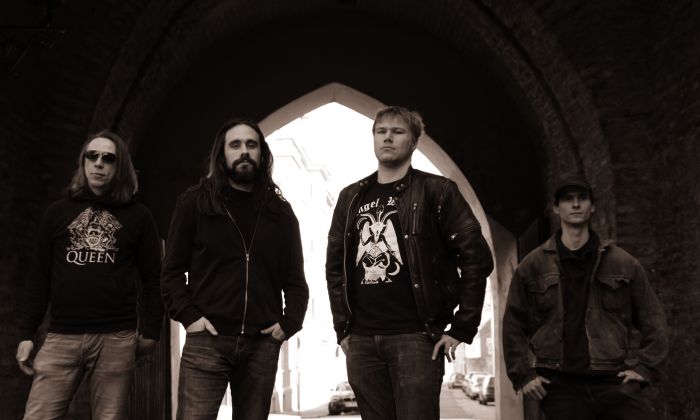 Raw almost primal, the sound of German metallers Olymp is as intriguing as it is rousing certainly within their new self-titled EP. With its Teutonic heavy metal breeding and hungrily driving riffery described as being traditional 80´s styled, it is a proposition which demands attention yet it only tells part of the sonic picture. There is rabidity and essence of its character which is pure punk rock and an additional multi-flavoured web of flavours and imagination which only gives richer texture to its breath. It all goes to make the EP an introduction to the band that refuses to be ignored.

Formed in 2018, the Augsburg quartet consists of Butschi (guitars, vocals), André (bass), Armin (guitars), and Dommi (drums). There is little more we can tell you about the band but it is all about their first EP and that quickly gripped ears and appetite with opener Lightning Eater. Its initial bass lure simply teased attention, the quickly joining wires of guitar just as enticing as the song rose to its threatening feet though its menace is as alluring as it is predatory. It is with Butschi’s grouchy vocals and the subsequent band hollers that that punk essence arises, a voracious scent which aligns potently with the classic metal teased skilfully woven web of grooves and riffs that fuel the excellent start to the EP.

Fire And Fury is next up and begins with its own dark, imposing invitation for ears and imagination, one proving easy to quickly devour and relish as it continues to darkly stain the weave of metal flames and sonic enterprise wrapping rhythmic agility. As with the first song, its body is perpetually galvanic and chorus anthemic cajoling as once again punk and metal unite in an almost garage bred styling of both flavours.

A Celtic hue lines the beginnings of the following Shut Down, the guitar proving a web of sonic intoxication as rhythms create a contagious shuffle. Dark shadows court both at the same time, brewing an invasive hue to the subsequent punk ‘n heavy metal dance. If you can imagine a hybrid sound from a union of the punk density of The Lurkers, the melodic endeavour of U.D.O, and the metal esurience of Destruction then maybe a hint of the song’s and Olymp’s sound becomes clearer.

The EP ends with The Messenger, it’s melodic beckoning straight away wrapping around welcoming ears before riffs and hooks collude to further and increasingly tempt. From within that potent draw a controlled thrash hued swing begins its own thick enticement. Admittedly by its close it was a track which could not quite find the impressive heights of its predecessors but had plenty to hold court in ears and appetite as imagination shaped its fascination inciting presence.

Olymp’s sound as rousing as it is feels like it is only at the beginning of its journey and evolution and a fine adventure it should be for all if they build on and push the highly enjoyable and impressive enterprise within their first release; we wait in eager anticipation.

The Olymp EP is out now with limited availability @ https://olympmetal.bandcamp.com/album/olymp-e-p