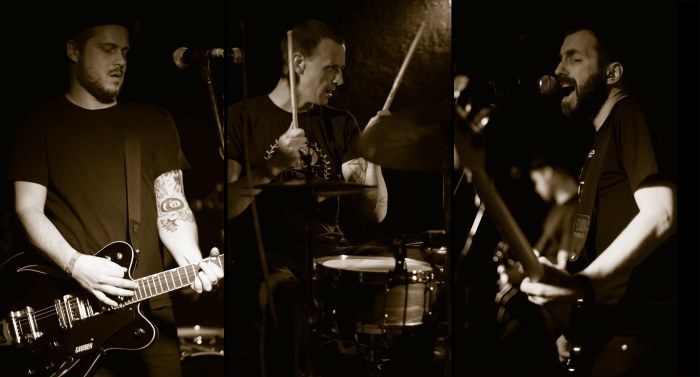 Two years and a handful of months on from igniting the senses and passions with their previous album, Supersonic, French punks Union Jack have unleashed a just as voracious and compelling assault in the shape of Violence. With ten tracks which sonically live up to its title, the band’s new full-length ravages as it snarls, bounces as it unleashes ravening contagion. After the release of its predecessor we suggested that the Paris hailing trio could infringe on the world beyond their homeland, the UK and parts of Europe; with its successor we expect it.

In many ways Violence is a somewhat harsher and fractious trespass than that offered by Supersonic but still ripe with the instinctive catchiness and contagious character which marked out that previous outing. From vocals to sound, textures to aggression, it is an openly feral affair but one swiftly proving addictively contagious to ears and an ever hungry punk appetite.

Since emerging in 1997, Union Jacks’ fusion of punk, ska, hardcore and raw rock ‘n’ roll has bred its own individuality, one which has grown and evolved as a host of other flavours has been embraced and Violence only stretches that adventure. With its untamed air and trespass, the album in some ways looks back on the band’s early releases but with its noise fuelled twists, lyrical world attacking irritability, and rapacious almost cacophonous breath it is a whole fresh incitement for Union Jack and punk itself.

The album opens up with So Cold, the beat bouncing invitation of drummer Antoine Sirven Gabiache leading the way before the guitar of Tom Marchal and bass of Rude Ben spin their equally ear summoning threads of sound around the song’s initial lure. Quickly it is a volatile stroll of sound and infection, mouth-watering discord uniting with punk belligerence in music and voice, the mesh of vocal voracity from all three band members as tenacious as it is mischievously dissonant. With an At The Drive In-esque sonic tension and unpredictability, the track makes for a striking start to Violence with devilish keys adding to the temptation. 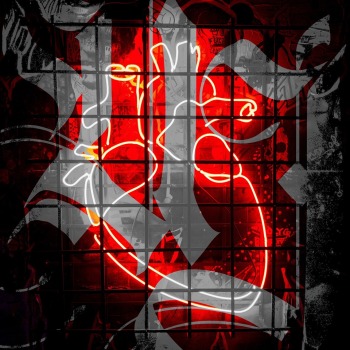 Venom ensures it continues as its swinging gait and savagery is immediately infectious, guitar and bass driving a boisterously truculent and catchy attack with the latter laying down a wicked groove as again vocals collude in a magnetic squall. Three minutes of noisy punk manipulation leads to two minutes of noise twisting ferity as Dance In The Fire springs its own cauldron of vocal and sonic dispute around manipulative hooks and grooves which invade and incite body and instinctive pleasure. The track is pure rock ‘n’ roll at its most wild yet deviously sculpted.

Poison Me instantly infests ears with a dancing melody if one with a certain acerbic edge which is inflamed across the instantly following hooks and an enterprise exposed by craft and imagination. Nimble keys flirt and tease from within the web of contagion unleashed by guitar and bass, the song a rousing and refreshing slice of animated ingenuity proving a definite favourite though matched throughout the album as proven by the calmer but as hungrily catchy Legacy. Like Joe Jackson meets Stiff Little Fingers, the song is pure temptation, if far too short at barely a minute length, and only more irresistible through the addition of Philippe Cattafesta’s piano organ.

Through the primal raging of Vasectomy, the song a fury of contagiousness and Frustration with its fertile noise bred roar, Violence only tightened its grip on attention and appetite; the lively hooks and spirited antics of both an inevitable and inescapable persuasion and each challenging that favourite moment choice, while Sugar is a collision of old school punk and rabid hardcore which ears and body had no defence to.

The final pair of Thieves & Liars and Nocturne take the album out as impressively as it came in, the first a multi-flavoured lure of punk and rock. It’s less intensive and ferocious presence compared to predecessors unveils a landscape of melodic and sonic dexterity but with an inherent cynicism and severity of word and emotion which makes you take stock while the final track is another inferno of the bands highly flavoursome and inventive sound with hooks and melodies that take hold of the senses like the strings of a puppeteer.

There is a definite uncompromising breath to the Union Jack sound which aligns a challenge with the temptation sprung but one which punk and noise fans will only relish along with the devilish enterprise which effortlessly escapes the band.

Violence is out now; available @ https://unionjack.bandcamp.com/album/violence