If the recent release of the new Cockroach Clan album was not enough proof there is now the new EP from Exploding Head Syndrome to prove that the Norwegian punk scene is in fine fettle. Aristocratical Tendencies unleashes five slices of punk/hardcore incitement which raucously roar with voracious contagiousness.

Aristocratical Tendencies follows the Oslo based band’s acclaimed 2016 album World Crashes Down and comes just after the quintet have returned from a mini-tour covering Norway, Sweden, Austria, Slovenia, Czech Republic and Hungary and included playing Europe’s Number One punk festival Punk Rock Holiday in Slovenia, sharing stage with NOFX, Pennywise, Frank Turner, Propagandhi, Descendents, Anti-Lam Front and many more. With their live reputation already highly praised and established through their own headlining shows and gigs alongside bands such as Satyricon, Sham69, Honningbarna, The Good Bad and The Zugly and Blood Command, Exploding Head Syndrome only reinforce and push on a similar stature gained through their records with their latest offering.

Shades is first up on the EP, a stroke of guitar igniting a hungry lurch of rhythms and vocal incitement before it all comes together in a virulently voracious trespass of sound. Vocalist Eirik Ekholdt bellows from within the punk eruption, the guitars of Morten Rørvig and Jonas Andreassen casting ferocious yet greedily infectious encouragement around him as all the while rhythms bite and trespass. It is a glorious assault, ripe hooks sprung with keen devilment and sonic threads spun with imposing drama but a song unafraid to go for the jugular. 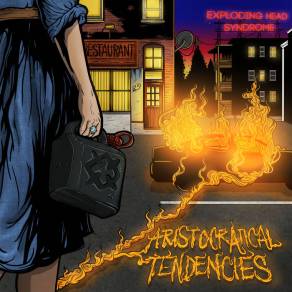 The following Hardcore Jesus makes a more considered approach, melodic wiring enticing attention as around them a brewing tempest of sound grows. In quick time, the track breaks into a rapacious stroll, the swinging beats of drummer Lars Kirkerud steering its feisty gait as Håvard Jacobsen’s bassline broods. Again it is a feral invitation impossible to ignore and soon resist with its contagion loaded chorus, a hardcore meets hard rock landscape doing nothing to diminish its insistently catchy punk instincts.

I Got Feelings provides two minutes of equally rousing punk confrontation where open irritability colludes with anthemic prowess in a climate of discontent, the result another infectious incursion upon welcoming senses before You Have Your Dreams (I Have My Nightmares) sinks its similarly belligerent and fractious claws into ears and appetite. Once more there is bassline to devour and a creative squall of guitar to swing with, vocals and rhythms only adding to the manipulation as it all heads towards a robust holler.

The EP is closed up by All Change Is Bad, the track springing from the sonic departure of its predecessor with heftily swung beats and an entanglement of wiry guitar enterprise. That alone proves enough to infest body and attitude but with the raw incitement of vocals and the swinging groove of the bass, things only become more insatiable and gripping.

It is a great end to a superb release from a band we only find ourselves becoming more addicted to by the listen.

Like Loading...
‹ Luis Mojica – How A Stranger Is Made
Goodbye Mr MacKenzie – Good Deeds and Dirty Rags ›