This September sees American cellist, performance artist and the artistic director of the interdisciplinary performing arts group Juxtapositions, Cellista begin a series of live dates in support of her recently released album-book, Transfigurations. They are moments in time sure to fascinate and provoke as classical music, theatre, improvisation and visual art entwine with tapestries and intimations of sound and genres and align with the compelling body of Transfigurations.

The release itself is a politically-charged invitation to thought and imagination with a layer of closer intimacy. From its first breath Transfigurations evoked attention and contemplation as Rupture I opens things up with an aural echo of defiance and oppression. It is a potent introduction to the heart of the album leading to the pure captivation that is Confessions. Featuring the magnetic tones of Rykarda Parasol across the equally transfixing cello led musing of Cellista, the track slowly but firmly strolled through ears, plucked strings a brooding radiance and melodies a captivating sigh alongside verbal intimacy. 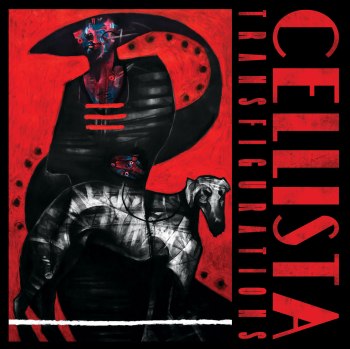 Rupture II brings the current US ‘frontman’ with a typical declaration before Look Homeward, Angel steps forward to entice and reward. Cello caresses swiftly and easily seduce and inflame the senses even before the lyrical and vocal rhyming of hip hop artist DEM ONE (a.k.a. Demone Carter) evoke further eager attention. As the track continues to absorb and infest, soprano vocalist Melissa Wimbish accentuates its inherent beauty, it all arm in arm with the simply irresistible lures of Cellista’s strings.

The provocative series of Ruptures continue to separate and mark upon each track, the darkly shadowed and increasingly intense third welcoming the contrasting but no less powerful and consuming piece of narrative that is You Can’t Go Home Again. An electronic shimmer surrounds and accentuates the absorbing storytelling, the track increasingly darker and imposing by the minute and indeed enthralling.

A dystopian air clouds Repetitions, its breath intense and composition unpredictable ensuring fascination embraced every note and creative trespass while the three part movement of When the War Began left a similar maybe even more dramatic imprint on the senses and imagination with its rousing cacophony of tenebrific incitement cast with a craft and invention often as delicate as it is imposing; keys and cello led intimation a wonderfully forceful evocation.

Tzeva Adom brings the album to a close; the sirens of its early-warning radar system the prelude to a radiant and defiant beauty as strings and keys again weave a pungent tapestry of emotion and sound. It is a haunting and arresting conclusion to an album which bewitched from start to finish whilst provoking increasingly darker and tempestuous shadows and emotions.

Words can certainly hint but with Transfigurations only experiencing is the true way to understand its magnificence.

Upcoming Live Dates (tickets at the door or reserve online via Facebook):

Sept 22 Portland, OR – a steep & thorny way to heaven (with Operafication, The Zero Collective)