There are times when you realise that unknowingly you have been waiting for a certain encounter and such is our feeling with the debut release from UK outfit Dry Cleaning. The Sweet Princess is a fascinating chunk of post punk/new wave drama which is openly inspired by the dark glories of the eighties but revels in an imagination and creative irreverence which wholly belongs to the London based quartet.

With a karaoke party in 2017 inspiring an instrumental collaboration, Dry Cleaning found its whole and voice with the addition of Florence Shaw six months later, she with no prior musical experiences joining Lewis Maynard, Tom Dowse, and Nick Buxton. Together they recorded the six-track Sweet Princess EP before playing their first show only last year which has been followed by headline shows and a tour with NYC’s Bodega. That live presence has already urged keen interest which their debut as a full introduction can only embrace and further ignite. 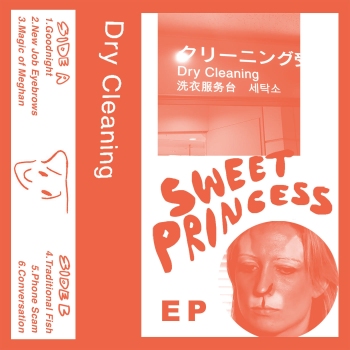 To try and place the sound of Dry Cleaning, it sits somewhere between Pylon and the Au Pairs with an originality which embraces some familiar hues but twists them to its own inventive devices. Shaw’s spoken word styled delivery sparks thoughts of Lesley Woods of the latter of the previously mentioned bands and at times The Anaemic Boyfriends, her words almost snatches of life and opinion woven together to create and echo kitchen sink situations as well as broader issues. EP opener, Goodnight quickly reveals it is a potent and striking incitement just as magnetically matched by the sounds which stride alongside. The first song concussively strikes like a sonic cobra before breaking into a virulent stride the Gang Of Four would be proud of. Vocals and rhythms collude in their temptation, the insistence of the latter led by the throbbing bass irresistible as guitars add their choppy lures and beats swing with matching rapacity. A melodic hook right out of the Buzzcocks songbook is extra manna to devour as it entwines the intimacy of word and reflection.

The following New Job quickly proved itself to be just as tantalising, also needing mere seconds and breaths to tempt and enslave as beats draw in another eagerly enticing hook aligned to the melodic tones of Shaw. Its punk breeding is soon released in flames of jangling guitar, a Raincoats meets early Cure spicing lining the track’s irreverence romance of discord.

An ode to the Duchess of Sussex and look at the intent and deeds of the media towards such celebrities, Magic of Meghan entangled ears in a guitar bred web from the off, appetite only further bound as the song  sets off on a sonic saunter driven by the band’s ever tenacious rhythmic nagging with its Artery-esque agility. As its predecessors, it burrowed deep within the skin and enslaved in no time, a prowess just as hungry within the dark crawling proposition of Traditional Fish. Even in its almost predatory prowl there is an energy which is pure incitement as too is the melodic and sonic wiring that threads its Feelies like body.

For all the references Dry Cleaning is a band which only uncages a sense of uniqueness in its sound as evidenced once more within Phone Scam. There is a Fire Engines hue to the guitar as the song shapes its refreshing presence around Shaw’s ever potent collage of words and phrases; that alone proving enough to incite greed though it is the delicious bass and drums propelled lure at its core which turned greed into lust.

Concluded by the keenly swinging sonic shimmer of Conversation, the song a final piece of dark and pulsating imagination, Sweet Princess is a release we for one cannot get enough of. Over far too soon, the EP sparked excitement as thickly as pleasure; at times that is a rare find in music but easy to imagine the first of many alongside Dry Cleaning.

Sweet Princess is out now via It’s OK; available @ https://drycleaning.bandcamp.com/releases