Home › Music › Album › Exes For Eyes – Of Strength And Sorrow

Exes For Eyes – Of Strength And Sorrow

Since the release of their previous album in 2014, Canadian metallers Exes For Eyes have been on a hiatus of sorts but now they have returned with a new collection of tracks which not only enhance their established reputation but push it to a loftier height. Of Strength And Sorrow is a fury of bold adventure and eager enterprise, a release also relishing a greater diversity and imagination in the band’s sound whilst making for one striking encounter.

Ontario hailing, Exes For Eyes was borne from the musical vision and creativity of Dave Sheldon (ex. Man With Target, Annihilator) and the lyrical conception of vocalist Big James (Stab.Twist.Pull, Endast, Authors). Previous well-received releases proved an enticing cauldron of multi-flavoured metal endeavour with a progressive bent but the time between the previous Tongues Like Figure Eights and Of Strength And Sorrow has seen it grow, mature, and immerse in greater imagination without losing almost feral instincts.

Their new album opens with the outstanding Build, Work, Dream, Create; a track which if standing alone in major temptation would have brought the full-length strong praise. One of our favourite moments of the year so far, the song immediately launches itself with an irresistible groove within a barbarous but effortlessly contagious surge. It is eager enticement which continues to tempt and manipulate as vocals expel their intent and prowess with raw emotive discontent. The track is superb, groove and death metal essences colluding in its tempestuous roar, every second a cauldron of virulent enterprise and ferocity. 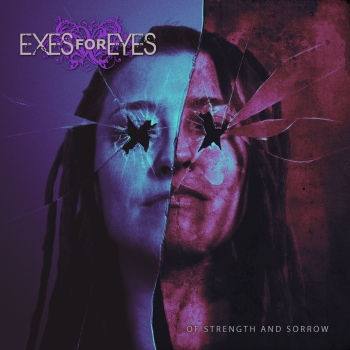 It is a thrilling start which Memories That Last follows and backs with its own inferno of rapacious sound and ear grabbing imagination. More uncompromising by the minute the track provided a quickly testing and swiftly rewarding proposal as imagination fuelled its every invasive throe before the song drifted away and the predatory presence of The Metal forcibly prowled. It was an initial stalking which subsequently erupted into a ruthless trespass, its stroll continuing to menace and bully as the band’s imagination flourished and shaped one enthralling assault marked with individual prowess.

Nothing Ever Satisfies in contrast provides a calm but just as enticing invitation, at least initially as the guitar’s melodic coaxing soon becomes a cyclone of resolute sound and voice around another irresistible collusion of grooves and hooks. A rival for the opener, the track continued to enthral and arouse as its turbulence fed off the mercurial volatility in its heart and roar; submission to its creative appropriation willing and inevitable.

Featuring Trey Xavier of In Virtue, The Fire Inside My Head entangled ears in another spiral of wiry grooves and rhythmic motivation straight after. It is an opening which intensifies by the breath, vocals adding to the attention grabbing pestering before the sonic wind drops and the bass brings its funk instincts to bear. That is just the invitation to a new progressive sigh of imagination laced with a slight Hed(PE) hue and another alluring aspect to the fascinating encounter. With keys providing perpetual intimation throughout, the song’s tempest ignites again; the cycle repeating with richer temptation.

Through the fierce yet melodically elegant Set It All On Fire and The Savage Self with its savagely contagious trespass, album and band only accentuated their expectation squashing prowess; both songs relishing the progressive bent in the songwriting and imagination of Exes For Eyes. It is also fair to say that both songs as most around them flourish with closer and continued attention, new textures and layers of enterprise emerging from within their masterfully sculpted furores, next up I Miss My Friends (Too Many Of Them Are Dead) reaffirming that quality as its solemn and melancholic beginnings inspire a melodic pyre of dexterity and guile within a voracious if mercurial landscape of uncompromising encroachment.

The likes of Hold On with its two chaptered proposal, the first as respectful and catchy as the other is invasive and confrontational, and the resourcefully animated True Self Reckoning ensure the album’s grip remained tight, their successor, Love, with Pepe Poliquin of BornBroken guesting matching their strengths with its own contemptuous strike, one which at times is melodically seductive and progressively illuminated.

Of Strength And Sorrow concludes with firstly Get The Fuck Out Of My Head which as keys haunt from its first sigh while rhythms simply enticed, both continuing to enthral as emerging drama and dark deeds rise, emerged another excellent track within the album. Methuselah follows one stirring moment with its own rousing presentation of invention and imagination, in many ways summing up the variety and adventure of the band’s sound in its own capricious multi-flavoured and dramatic body.

Though Of Strength and Sorrow had us hooked from the start it is right to say that the depth, layers, and expanse of its qualities and persuasion was only greater tapped with subsequent ventures into its increasingly and imposingly impressive body. Quite simply, Exes For Eyes are back and creatively deadlier than ever.

Of Strength and Sorrow is out now and available @ https://www.exesforeyes.com/