With a rather potent reputation in tow courtesy of their highly energetic live performances, alternative rock outfit Caustic Minds has a certain buzz brewing up around them and one sure to be only accelerated by the recent release of the band’s debut EP. Five tracks strong, Black Oil For A Soul is quite simply an encounter which makes you just stop and pay attention.

Formed in Germany in 2007, Berlin based Caustic Minds has a background as rich as their sound. Vocalist Laura Jiménez Alvarez comes from Mexico City, while guitarist Daniel Viseras Calvache is Granada in Spain hailing. With bassist Michiel Sybers born in Antwerpen, Belgium and drummer Chris Crabtree British/German bred, it is a cosmopolitan mix as flavoursome as the blend of hard rock and indie enticement they conjure up between them. Over time the band has had references to the likes of Queens Of The Stone Age, The Dead Weather, Arctic Monkeys, and Black Sabbath shared upon their sound though for our ears Black Oil For A Soul tantalises and captivates like a hybrid fusion of Karn8 and My Baby.

Persistently compelling in its enterprise and bold in its character, the EP immediately had ears and imagination enslaved with opener Eyes On Fire. Never relinquishing its favourite track grip from its first escapade, the song instantly harries and tempts with a stalking fusion of stabbing beats and siren scythes of guitar. Instantly magnetic, the track only escalates its lures as a swagger breaks out in a sure stroll ridden by the similarly captivating tones of Alvarez. With a groove which infests hips without invitation and an instinctive roar that demands unity, the imagination soaked track easily gripped body and appetite. 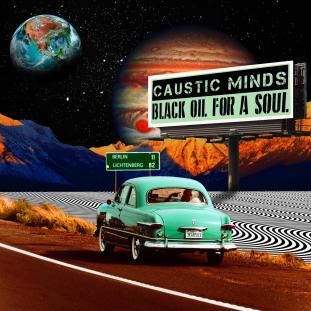 Though for personal tastes the release never quite reached those major heights again, its presence and enterprise is a lofty adventure that continues to beguile, next up Baby Doll providing a fiery blaze of punk shaped rock ‘n’ roll with progressive breath to its winds as melodic seduction fuels its great unpredictability.

Similarly Destroyer teased and taunted the imagination; its immediate launch part prowl part strut and all fascination. Intoxicating in its bluesy charm and eye balling in its attitude, the temptress of a song proved another irresistible holler which never fed expectations before Blacklist brought its own beguiling lures to the party. Rising on spirals of sonic and melodic heat, the track is another which teases as it tempts. Like flames in a fire stirring thoughts and gripping attention as its spellbinding hold sprung creative shapes the song simply flirted with the imagination as vocals and individual enterprise trapped ears.

The EP closes up with Carry On, another moment within the EP that enthralled with ease as its seductive moves and shameless grooves toyed alongside the ever compelling barracuda toned bass of Sybers. As each track and the EP as a whole, the closer is all sensuous bait and steamy endeavour honed into rock ‘n’ roll that shamelessly and skilfully entices and firmly attracts.

Black Oil For A Soul more than suggests that the boisterous murmur around Caustic Minds is sound and about to boil over beyond the German borders the band is already putting under their spell and as a bonus ‘name your own price’ release on the band’s Bandcamp site, it is one encounter no one should be ignoring.

Black Oil For A Soul is available now @ https://causticminds.bandcamp.com/