If conventions are for flouting and creative borders for escaping then San Francisco trio Freighter are equipped to lead the exodus though on the evidence of the band’s new album, The Den, there are few others which can rival their voracious appetite for both. Across eight ferociously bold atypical tracks, band and release revel in embracing and disfiguring time signatures, previously defined flavours, and anything expectations can conjure to cast a diabolical web of uniqueness which very often escapes the confines of the listener’s imagination.

Formed years back by lifelong friends guitarist/vocalist Travis Andrews and bassist Jason Braatz and subsequently completed by drummer Matt Guggemos, Freighter weave a technical progressive metal confrontation which soon reveals it goes far beyond those confines. 2008 saw the release of their self-titled debut album but then seemingly came an extremely quiet period as members pursued other projects. Five years on and the original pair reunited and began plotting and weaving the band’s next chapter which is now indelibly marked by the release of The Den.

Themed by ”the endless struggle with sleep and the downstream effects of not getting enough of it,” The Den immediately entangles ears and imagination in its ferocious mania through Psychic Reading ’94; the track harassing the senses with guitar and drums as the bass springs its own dissonant welcome. Andrews’ vocals soon join the sonic pestering with matching relish, the song swiftly stamping its authority on attention whilst twisting its creative entrails. Guggemos’ rhythms continue to coerce as they molest, the bass courting the wild turbulence with its own feral rousing of ears and appetite. Within it all though, an untamed sense of order is established but one which still only echoes the brazen uproar erupting from within the band’s imaginative and inventive dissonance. 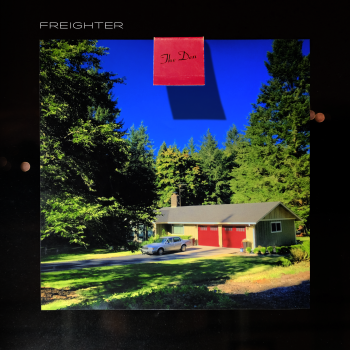 With barely a breath drawn, Future Duke burst upon the senses next, its barbarous trespass as infectious as it is fearsome as it descends on beleaguered senses. As with the first track, there is a noise punk ferocity and predation to the assault which instantly grabbed approval and only enhanced its grip as melodic and progressive hues blossomed within the, at times, carnal maelstrom of sound and innovation. Glorious and devastating, the outstanding track is only echoed in temptation and striking prowess by Presto Change-O, its challenge immediate, visceral and inescapably stirring as the guitar feverishly burrowed under skin already battered and bruised by contorted rhythms. From that sonic insurgence a delicious melodic teasing adds its own bait, a riveting concoction which only intensifies as the track bares its unmethodical but skilfully woven drama. Even clutch of seconds brings fresh enterprise and incitement, keys and vocal variety adding to the genius outpouring.

Three tracks in and the uniqueness of release and sound is etched on the psyche but imagine a cauldron boiling up the essences of bands such as Cryptopsy, KEN mode, Art Of Burning Water, Sofy Major, and System Of A Down and you have a whiff of the tempest within The Den as epitomised by Hot Car Death Dad next.  With its engine finally engaged, the track takes to the sonic highway with a wonderful groove, another essence conjured which niggles at the psyche like a demented puppeteer as heavier rhythmic tones court its persuasion. The ride as you can rightly assume is upon an undulating road of twists and turns, each an adventure in its own right and all adding up to a nightmarish road trip of enthralling misshapen adventure.

Stick Around And Do It Right Until You Get It Perfect shares its brief esurient proposal straight after, springing forward unscrupulous and eventfully unpredictable antics woven together to create another major and seriously compelling moment within the album. Perpetually rabid but equally, at certain times, just calmly mesmeric, the song seduced as it devoured with again within The Den every second bringing an unpredictability and virulent tempting which just consumed the passions before King Pigeon stamped its authority on ears and appetite. Its continuously ruthless attack courtesy of Guggemos initially belies the jazz bred ingredients in waiting; their eventual animation soon beleaguered by the tide of infernal sound led by Braatz’s ever eagerly consumed and rousing gnarly basslines. To be honest as with all tracks we can only give a glimpse of the real invention of the imaginative incidents let alone the striking craft aligned to psychotic songwriting within songs but as proven once more the real fun is in the physical discovery anyway.

Talking of unbalanced and unstable, both apply to the ferocious might and wonder of the glorious Harbor Of Dieppe, a track which simply assaulted as it lustfully ignited a similarly tenacious imagination, and the album closing exploits of the salaciously flirtatious Cimitero. Both tracks fascinated as they burrowed under the skin, the latter a tantalising cacophonous waltz cast in beauty and discord with its predecessor the kind of incessant examining and dismembering of the senses so simple to drool over.

Fair to say we consumed and doted on every second of The Den with increasingly open lust listen by listen It may have taken an age for Freighter to return with a second album but its might will have all fans caring little and though it could be too early to suggest the main best album contenders for the year but there is no doubt this ravenous treat will majorly figure here and beyond.

The Den is out now @ https://freighter.bandcamp.com/album/the-den