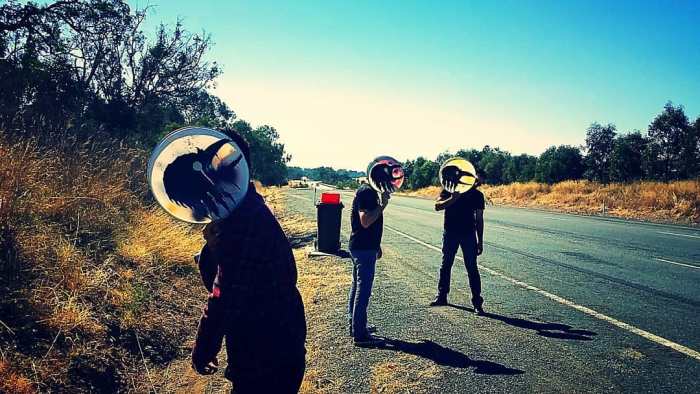 Three years after uncaging their most roguish, fiendishly dishonourable album yet, and their most irresistible in Songs From The Gunt, Australian reprobates I Am Duckeye have just unleashed an equally diabolical successor in Puce. Looking back across their previous three albums, EPs and singles, it is no secret that the band’s unpredictable fusion of punk, virulent metal, voracious rock, and unapologetically questionable humour has grown thicker and heavier in enterprise and weight. Now though the Melbourne outfit has dived headlong into the charnel house of noise and sludge flooded animosity whilst still embracing that initial breeding of sound and emerged with one challenging, raveningly feral, and compelling beast of a release.

Whether to mark this twist of direction in sound, though it is still very recognisable I Am Duckeye, the band has slimmed the band name down to simply Duckeye though they still use their full name everywhere else it seems. Being lazy we will use the shortened version as on Puce, a release also seeing another reduction, in the bands line-up. Duckeye has slimmed to the irrepressible trio of vocalist/guitarist Sam Haycroft, bassist Jules Medor, and drummer/producer Sean Bailey, a threesome unplugging the floodgates of sonic voracity whilst humour wise too, they have bred a fresh trespass. Certainly Puce does not hold back with a tongue hungrily pushing the cheek but it aligns to a deliberately caustic and social scowl on the world and people fuelling the chaos today; maybe some will say it is mischief which has grown up a tad but yes it still brings a ready childish grin to the face with regularity.

It is probably fair to say that Puce does not have songs which virally leapt from the speakers into our particular devilment as many of the band’s previous infestations yet all make for a fiercely memorable moment and all have attributes which just got under the skin and into our lustful appetites. Across the album riffs mercilessly trespass, grooves wickedly entangle, and hooks ensnare with nefarious ease and throughout the band’s punk metal instincts erupted to inflame ours.

Puce first erupts with Docks, Haycroft’s lone guitar casting steely strokes at ears with his just as untamed tones quickly stepping forward to its side. Then as swiftly the track stretches its muscles and strides forth, rhythms almost gleefully and definitely venomously dancing on the senses that grooves keenly infest. As suggested earlier, the contagious sound is as individual Duckeye as fans would hope but it is a new monster with no qualms about parading seductive enterprise within its voracious incitement.

In contrast to the excited gait of its predecessor, the following Stab Flats crawls over the listener; doom and gloom soaking its prowl as noise and sludge coated aspects collect in its magnetic bowels. Eventually it escapes its chains to angrily cavort through ears, with it a new wave of ravenous flavours and styles carnivorously clawing at the listener. Reverting back to its predacious drag of its irresistible Birthday Party hued sonic body it makes way for the equally examining exploits of Headlights, the senses caught on its sonic glare whilst the body is bouncing to its barbarous manipulation. Again at times there is an echo of eighties post punk to its corrosive toxicity but once more it just spices up that Duckeye uniqueness channelling through song to the pleasure it sparked.

It is often enjoyment loaded with punishment as witnessed in Dead End, the track just short of two and a half minutes of bestial incitement churning up the senses and every esurient lust you have inside through punk and dense extreme metal fired savagery. Addiction to it was inevitable with our appetites here, the song bordering cannibalistic as it devours its own virulence with just as captivating barbarity.

The lengthy trespass of the following Tree Puncher is more familiar Duckeye, initially luring attention with their established creative mischief but it too its soon flexing its grievous dexterity, the song a kind of bridge between Puce and the band’s last outstanding full-length. By its departure though, the track is all predator and simply corroding the senses, indeed disintegrating them with sonic scorching though they are soon brought back to life by the animated dissonance of Defeated. It is a song with post metal winds which absorbed if not aroused initially but then it goes and throws wicked grooved interruptions of lusty ire to raise the temptation and pleasure by multiple degrees

Both Sense and Finger deviously got under the skin, the first with its delicious initial gothic Bauhaus-esque hues and more so with its metal forged punk ‘n’ roll carousing and the second through its classic metal wired, stoner sludge stroll; again virulence flowing through netting of infectious veins.

The final pair of tracks on the album proves themselves just as unscrupulously tempting; Dead Eyes with its cold stare and predacious prowl masterfully wily and persuasive, villainous rock ‘n’ roll at its notorious best, while Blue Hand leaps on another wealth of fresh flavours to ignite its enterprise woven web.

Together they provide a richly gripping conclusion to an album which assaults and invigorates second by second, thrilling with every passing trespass. Puce only gets better and more addictive by the listen too so maybe this is the moment the world catches a dose of the I Am Duckeye virus; it would be a better place for doing so.