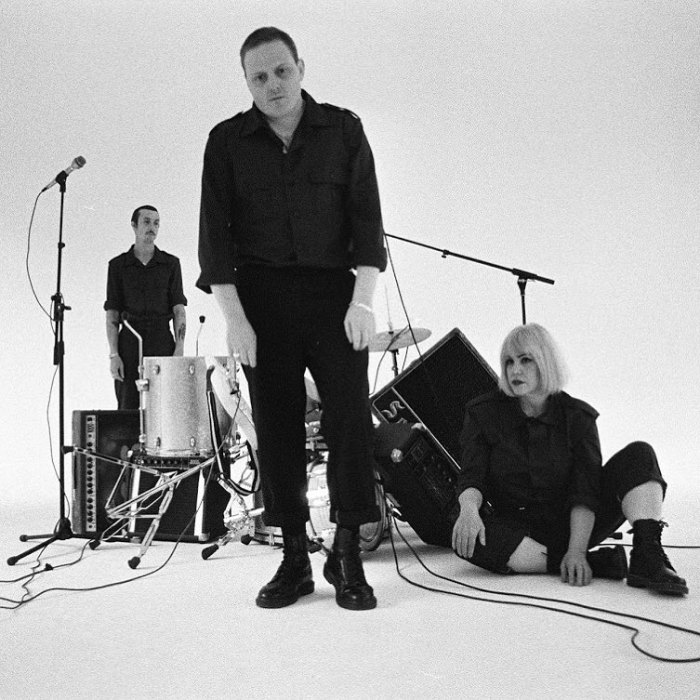 The release of Pre/Post: A Collection 2016-2018 draws another shameful admission from us; Girls In Synthesis had escaped our ears and attention until now. But we have now greedily gobbled up the band’s sound and confrontation thanks and a big thanks to the summing up of the band’s output to date courtesy of Louder Than War Records.

The limited edition album brings the UK band’s first four releases together in one place with each track re-mastered; their download only two track debut single joining a trio of long sold out and highly collectable 7″ EPs. The London trio cast a ferocious challenge with their sound, one bred in the instincts and heart of punk and post punk but swiftly revealing its own individual dissonance of noise and attitude to bring true uniqueness the mix. Lyrically and vocally the band pulls no punches; words crawling through ears and imagination as rapaciously as the anarcho bred sounds enveloping their discontent.

The two tracks of that first release opens up the album; The Mound rising up on a sonic strand before senses whipping beats infiltrate the invasive assault. Mere seconds pass before the skin tingled as the track burrowed beneath, instincts swiftly taken with its punk rancour and carnivorous sound. Carnal in its breath, the track quickly showed with its companion why it thrust the band upon so many radars. The magnetically raw Disappear is similarly primal and compelling; it’s bass driven grooved voracity insatiable and vocal catchiness virulent.

The self-titled opener of the Suburban Hell EP follows; its sonic fingering the prelude to a corrosive noise punk incursion which leaves no stone unturned as the infectiousness of the previous track is even more accentuated by the sonic ravening escaping guitars and throat. There is a hint of bands like Rema-Rema to the song too, one which is a touch more vocal within the bestial temptation of Phases. Its crunchy textures and senses wilting static soon proved irresistible, the song simply devouring willing to be overthrown defences in quick time before both Fucked and Solid Effect uncaged their individually harsh yet captivating cacophonies. The first of the two taunts and pesters in voice and noise, again an inherent catchiness fuelling its enmity while its successor emerges from its astringent wake with a contagion soaked fuzz coated trespass to just as powerfully tempt and stir.

We Might Not Make Tomorrow leads in the four tracks originally making up the band’s similarly named second EP. A heavier post punk discord accosts the quickly persuasive encounter; strains of early Killing Joke and a corrupted indeed bestial Fire Engines-esque disharmony adding to its virulent mordant clamour. Fair to say already a quickly formed favourites list was becoming increasingly lengthy as we explored more, this track to the fore but quickly worried by the invasive rhythmic jerking of Sentient. Immersion in the guitar’s sonic rancour only increased its magnificence; every note and syllable the perfect manipulative mix of threat and temptation before the deliciously trenchant Splinters and Rust deviously danced on submissive ears and appetite and the infectively scathing Tainted gurned over and twisted the senses into its tenacious plaything.

The final songs on the album come from the Fan The Flames EP of last year, its title song quickly uncaging a sonic abrasion as a great Adverts like rhythmic rumble infiltrates amidst yet again a Killing Joke hued rapacity. It too has a riveting nagging to its galvanic wires and rhythmic persistence, one only accelerated by the incitement and tenacity of the vocals; a simply enslaving mix further escalated in the Gang Of Four tinted post punk rowdiness of You’re Doing Fine. Every rhythmic swing bit, bass snarl gloriously lingered, and guitar stroke inflamed the passions with vocals and a great PiL scenting fattening the track’s might.

The great variety to tracks and sound is emphasized once more by Howling, the band aligning spoken word with atmospheric sonic toxicity, the track a haunting invasion which leaves hungrily persuasive toxins in the senses long after its departure.

Internal Politics completes the album, its post punk animation of bass and drums alone mercilessly compulsive and its increasing fertile mania just mouth-watering. Bands like Wire, 1919, and Big Black come to mind across the supreme final three minutes of the release but as always Girls In Synthesis only stand unique and irrepressible.

Thanks to Pre/Post: A Collection 2016-2018, Girls In Synthesis no longer lay undiscovered by us and will be persistently hunted from hereon in; come join the stalking with us.

Pre/Post: A Collection 2016-2018 is out now via Louder Than War Records @ https://girlsinsynthesis.bandcamp.com/album/pre-post-a-collection-2016-2018  and https://louderthanwar.com/shop/vinyl/girls-in-synthesis/