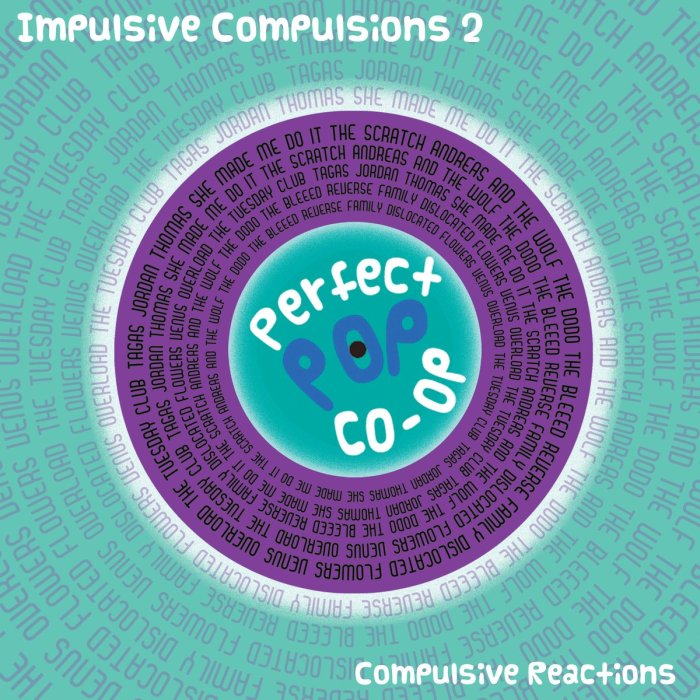 This month sees the next issue of the ever irresistible In The Club Magazine, the online celebration of all things DIY by Herts based Indie label Perfect Pop Co Op. This copy also includes the second volume of Impulsive Compulsions, a free album presenting more sounds and members of the Perfect Pop Co Op family in their enterprising glory.

As its predecessor, the album is a tantalising and intriguing not forgetting rousing proposition and reminder that the real heart and organic pleasures within music still breed and reside in the DIY fuelled underground. In no particular order allow us to tease you with what is on offer within another real treat from Perfect Pop Co Op, well a second treat as the magazine itself is a rather fine and fun thing too.

Earlier this year, ears and imagination were over excited by the new EP from She Made Me Do It. The band is the duo of Shaheena Dax (Rachel Stamp) and Will Crewdson (Rachel Stamp, Adam Ant, Scant Regard and many more) and the Drenched EP four tracks of their uniquely seductive and multi-flavoured ever blossoming sound. Impulsive Compulsions 02 features one of the EP’s tracks in Broken Morning; a song from its first strum of tantalising guitar which had ears attentive and then swiftly enslaved as it opened its magnetic arms to a richer sound and the mesmeric tones of Dax. Instinctive catchiness and creative eagerness roam the song, sharing a contagious indie rock swing around one compellingly persuasive chorus. Irresistible moments with She Made Me Do It are certainly not a rare thing but few times have been as delicious as this.

Alongside and around it, the goodness is just as potent as epitomised by tracks like I’ve Had Enough and Superslider from Tagas and Venus Overload respectively. The first is a lively simmer of electro pop rock, a bubbling slice of melodic radiance echoed in similarly warm vocals, a track which just nags at the senses with its teasing harmonics. Tagas is a solo project, an intimate exploration and reflection of its creator and the track here an embrace of melancholy and warmth with a great early Depeche Mode hue to its temptation. The second of the two is a band which released a self-titled album back in 2012 from which their contribution to the sampler comes. Their sound is a collusion of experimental and noise rock, a challenging and rewarding mix which had us mesmerised. It is raw, abrasive and persistently compelling with a great whiff of Buñuel to it.

No compilation from PPCO would be complete without a track from Reverse Family, and Sampler 02 offers up Friction from the solo project of Dermot Illogical. Melancholy also soaks the heart of this song, it a riveting piece of the individual post punk meets noise pop which escapes the imagination of its creator. The track haunts ears and imagination from start to finish but with an infectious momentum which infests hips and spirit.

Another electronically bred enticement is offered by The Scratch, the Logical PV Remix itself almost itch like in its temptation; repeat listens the only relief to its electro/indie pop antics while Andreas And The Wolf course the instincts to rock with their own wonk punk sound. Public Domain is a sizzling lure of unapologetically untamed rock ‘n’ roll but crafted with a mischief and imagination which hones it into one devilish tempting.

Even more feral in its own way is Valerie Leon (Queen of Neon) from The Bleeed, a band arising from the offshoot creativity of members of The Tuesday Club a couple years back and a song which is punk rock in its honest purity but unafraid to embrace other bold essences including a Swell Maps-esque irreverence.

Talking of The Tuesday Club, they stamp their inimitable presence on proceedings with an extended mix of their song Beat Oven. First appearing on the Boo Hoo EP, the now fully grown track is a boisterously swinging slip of the band’s eclectic rock ‘n’ roll, a sound which dips into the spices of a host of decades to create its own unique virulent recipe.

The D.O.D.O tell us it is Just a Game to stand just as tall as its sampler comrades, the song one also unafraid to lean on flavours past and present to create its provocative incitement and ear grabbing catchiness; an infectiousness just as ripe within the electronic resounding of Interesting Times from Dislocated Flowers. A dark, haunting verging on apocalyptic throb behind an evocative sample, the track simply resonates from first to last breath.

Completing the line-up of pleasure on the album is Jordan Thomas (though tagged as In The Evening on the promo sent over to us) from Jordan Thomas maybe better known as J-Rod to fans as a former member of The Tuesday Club. This too is an infective piece of sound, Thomas easily getting under the skin with his melodic amble of enterprise and craft.

And that is Impulsive Compulsions PPCO SAMPLER02, another very tasty and highly pleasurable parade of bands and projects past and present so go check out the new In The Club Magazine now @ https://perfectpopco-op.co.uk/magazine/ after all that is a damn fine read too.