They came, they infested, and they ignited a lustful appetite for their ravenous rattle rock sound around two years with a debut album which was all cunning lure and feral deviancy. Now UK duo Snakerattlers has unleashed its successor and a new tide of unbroken snarls and untamed sound greedily hungry to devour a new expanse of hosts.

Consisting of married couple Dan and Naomi Gott, Yorkshire hailing Snakerattlers breed a sound which whilst chewing on the raw essences of rockabilly, garage punk, death punk and prime rock ‘n’ roll has already shown its unique character through that first album, This Is Rattlerock. It is a proposal which may be in some ways sowed its seeds in the pair’s previous band, garage punk trio The Franceens, but bloomed and grew within the Snakerattlers first full-length and is an even bolder rapacious and irresistible holler within All Heads Will Roll.

All Heads Will Roll opens up with Aither’s Theme; Naomi’s beats a slow but suggestive crawl soon entangled in the sonic threads woven within Dan’s guitar. There is a whiff of menace to both but equally a hue intimating a waiting triumph which is soon in full blaze as the album’s title track bursts free from the final acidic melodic throes of its increasingly infectious predecessor. The second track initially teases with the voice and hooks of Dan, again they a controlled tempting courted by the heavy foot beats of his partner. Every passing chord and rhythmic jab brings greater contagion and enterprise, the pair’s ever rapacious vocal bait alone inescapable as garage punk and hell bred rock ‘n’ roll colludes around them.

That instinctive contagiousness flows as freely through next up Lose My Mind, a song embracing sixties garage rock flavouring as keenly as more punk and rock nurtured feverishness and aggression. There is a definite Cramps-esque lining to its catchy trespass and equally an instinctive wildness which is as eager in bands like The Creeping Ivies. Having seduced and devoured, the song makes way for the inescapable primitive manipulation of Do The Rattle Rock. Beats and chords incite as vocals implore; it all uniting in an invasion of willing ears and a body soon boldly rocking to the song’s voracious inclinations. 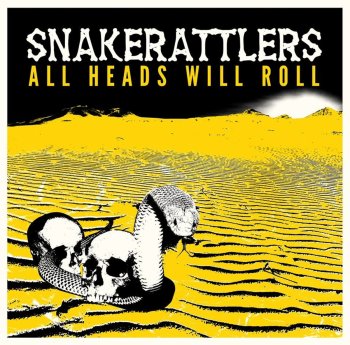 Old school rockabilly seeds the following dark seduction of She’s Strange, its dark lures and senses winding coaxing a devilish virus of sound and temptation while the skilfully voracious Rattle Rock Stomp simply unleashes restrained but barely contained bedlam in its rivetingly compelling swing. Dan’s vocals alone just infest the senses and pleasure fuelled appetite but add the ever resourceful and devious scything beats of Naomi and the almost corrosive clamour of guitar and it is manna for certainly these ears.

The album’s best track is swiftly backed in organic temptation by the melodic causticity that is I’ll Destroy Your Soul, the song a portentous romance for which an eager embrace or a quick fearful flee from is an equal option. It is another delicious sonic plague in a sound which has just further blossomed and evolved from that which created such a riveting debut for the band, a growth as potent within Standing On My Own and in turn Ooga Booga. The first of the two merges dark surf and angst lined melodic rock ‘n’ roll in its fiery infection, an infiltration becoming more magnetic and inventive as well as unpredictable by the second. Its successor is sheer sonic nagging against voodoo rhythms; a glorious incitement of sound and intent which had us mercilessly moving to its tune like participants in a devils puppet show.

The album concludes with firstly the equally sonically wily and rhythmically unscrupulous Snake Rattle Rock, Snake Rattle Roll, a track which had us bouncing without inhibition under the forceful direction of ever persuasive vocals. The track is pure demonic and masterful rock ‘n’ roll and another of the album’s major peaks in nothing but and matched in all aspects by the closing predacious prowl of Wild. It oozes menace though a threat wrapped in melodic acidity and under a controlled if feral hand which uncages more of its chaos chord by chord, corrosive blaze by blaze.

Together they bring a rousing end to an uproar of sonic anarchy and imaginative commotion going by the name of All Heads Will Roll. The first Snakerattlers album may have corrupted the passions of a great many but it pales against the howling magnificence, inexorable virulence and expected slavery of acclaim and new slaves now unleashed by Snakerattlers.

All Heads Will Roll is out now via Dirty Water Records, available @  https://www.dirtywaterrecords.co.uk/shop/#!/Snakerattlers/c/33534229/offset=0&sort=normal and https://snakerattlers.bandcamp.com/album/all-heads-will-roll