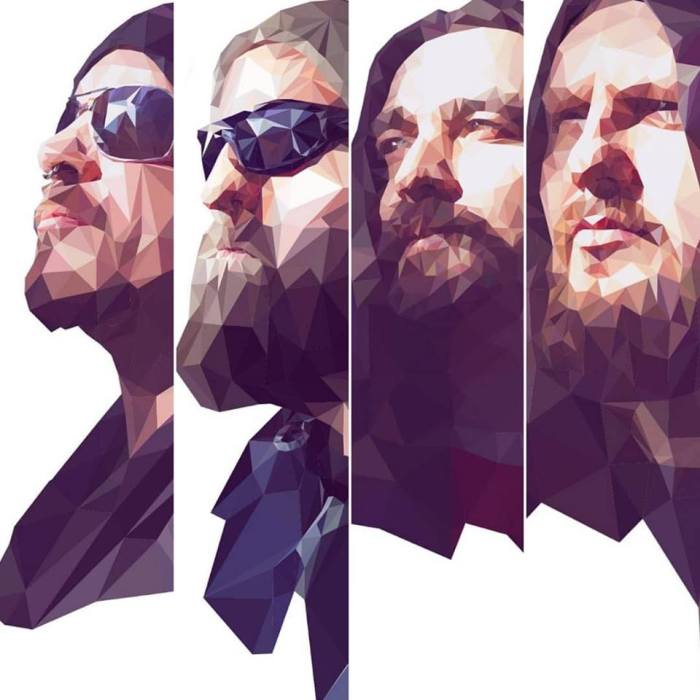 The release of the debut album from UK metallers Khaidian has been long time coming, seemingly expected and all geared up to be unleashed in 2016. But as ears and the passions are finally being infested, those patient many will feel it has been more than worth the wait and can assume they will soon be joined by tides of new hungrily impressed and lustful hearts. Penumbra is quite simply superb; a cauldron of imagination and intensity wrapped in a rainbow of melodic enterprise amidst a tempest of technical and multi-flavoured dexterity.

Listening to Penumbra, there is no surprise at the rising reputation and stature of the London based outfit; both recently given boost by a trio of lead tracks to the album. Weaving a web of rich intrigue and thick persuasion bred from a fusion of progressive and technical metal, the band’s sound is just as inventive and tempting with its alignment to eager strains of electronic cunning. It is something akin to a fusion of the voracious flavours and touch of Gojira, Sikth and The Browning with the ravenous/melodic adventuring of Tricore/An Entire Legion; even so Khaidian pull it all to a proposition which is as unapologetically unique as it is greedily captivating as Penumbra forcibly proves.

Founded in 2010 by guitarist/programmer John Tyrell (ex-Interlock), Khaidian found its first few years as much a difficult journey to find the right mix and line-up of people as an adventure in nurturing and breeding their vision and sound. In fact, the perfect mix of personnel only really appeared once drummer Paul Fowler (ex Dragnerve) was enlisted to join Tyrell, vocalist Andy Hutton (ex-Stoopi/Dragnerve), and bassist Joseph Perumal (Mortad/ex-Almamorta). It was Fowlers departure leading up to the original release date of Penumbra which he plays upon which played a big part in its delay it seems but the band has since found the equally striking and agile percussionist in Kris Perrin (Gravil, ex-One Fell Down, Faux Fighters), he completing the current line-up last year.

Now with everything firmly in place Penumbra has been unveiled and we for one can only suggest it is the first leap in a massive and surely certain ascent for the band into the broadest spotlights. The album opens with Pearls Before Swine and immediately had ears pricked and appetite keenly intrigued as sonic and electronic enticement colluded with already stirring rhythmic lures. Just as swiftly the equally potent and enticing vocals of Hutton step forward; his clean, calm yet emotive tones an alluring bridge between the band’s sides of physical trespass and suggestive melody, their indeed their technical hunger and electronic intimation. The track continues to stomp and dance with the senses, a mix of the familiar and boldly fresh creating a whole new vehicle for ears and imagination to ride with.

The striking start is only reinforced by the band’s outstanding new video/single Dominion. Its entrance is even more rapacious but almost instantly wears a portentous calm before its predacious instincts unite with inventive and somatic catchiness. Pure persuasion with increasing enslavement of the senses, the track embraces further hues resembling those cast by Voyager and Fear Factory as it twists and turns with relish but never breaking its fluidity or charm carrying rapacity.

The following Trigger The Landslide glides in on electronic shadows around a slim but copious melodic insinuation; all the while its air brewing an intensity and threat which turns into a senses harrying stroll. Still the menace is part anger, part seduction; the song never choosing sides even as its body and imagination boils across another devilish landscape of thought, emotion, and craft. As with all tracks some kind of participation is inevitable with the increasingly blossoming and thrilling encounter, a manipulation just as potent within next up Thrive and in turn Sense Of The Spherical. A Korn-esque scent pervades the first of the outstanding two, its carnivorous breath colluding with the skittish flirtation and bite of rhythms and the tantalising yet voracious almost rabid lures of guitars. Hutton again is a matching magnet in its midst as the track creatively and vocally writhes while its successor similarly draws dark and esurient strains of sound and intent with melodic and flirtatious enterprise to tempt, seduce, and infest ears and imagination in tandem with the body.

The album concludes with the pair of Evasion and Dramatic Professions Of Martyrdom, the band getting under the skin with relish in the first where again whiffs of Korn meets Fear Factory share its own inescapable  individuality, and through the second’s musical irritability, melodic and electronic espionage, and simply unique prowess. Both tracks enslaved as heartily and strenuously as those before, the bounce of bodies enough to suggest eager submission, the following lust unbridled confirmation.

No release is going to win over all but with its thick mix of flavours including at times spices of grunge, alternative metal and more alongside sheer invention, Penumbra is one which is going to conquer far more than most and with ease we suggest. Though in theory three years late it is one of the freshest most thrilling things heard here in a long time and Khaidian one of the most exciting propositions.