Can you first introduce the band and give us some background to its start?

Thanks for having us guys! We are a little band called Rozu from Denver Colorado, comprised of myself, Tim Graham (vocals), DJ Sundine (guitar), Henry Navarre (bass), and Brian Robertson (drums). We all came together back in January of this year with one goal in mind to write some heavy influenced post hardcore music. We have all been in our local scene for years always being the guys that were pushing our previous projects to get to that next level and thought it would be a good fit to all come together and have not just one member but all members with that same drive, passion, and work ethic.

Have you been or are involved in other bands? If so has that had any impact on what you are doing now, in maybe inspiring a change of style or direction?

Yeah, we have all been in bands for 5 plus years. DJ and myself were both in a band together that was pretty much in our same realm where Henry has been in so many different styles of bands and still writes a bunch of different styles of music from ours. Brian plays in another band that is a pretty awesome blend of A Day To Remember and Avenged Sevenfold and does musicals. I think our diversity while having these deep post hardcore love and roots give us a lot of cool ideas and diversity within our writing sessions that mesh very well.

We really just wanted something different and short, one word with a max of 3 syllables. We had a pretty long list of names and Rozu (Japanese for rose) was one of those ones that we all kind of fell in love with. We polled around some names with friends and connections and at the end of the day Rozu was the one that really caught everyone’s attention.

We really just wanted to write music together and the vibes were there. We want to tour and be in a band that is run the proper way and conduct more as a business. When it comes to our sound we wanted to stay true to our roots, but we don’t have any intention of writing the same formula with every song and instead want to write how we are feeling on that given day. This has led us to writing some really heavy songs and also a lot of very soft and even acoustic songs. With the digital age we live in we don’t want to confine ourselves to one style, but every song has that Rozu feel to it.

And that core aim still drives band even though it is still relatively fresh-faced or has grown?

It is still the same drive every day. It has been so awesome to have this incredible vibe and drive within our camp that I have personally never felt within any other band, which is truly a blessing.

Since those first steps how would you say your sound has evolved?

It is evolving every day. As we get more and more comfortable with each other more ideas are being thrown on the table and it is leading to some incredible songs. 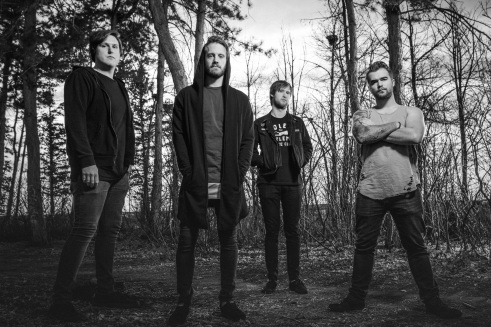 Has it been more of an organic growth within the band so far or more you deliberately wanting to try new things?

We always want to push each song to the next level from the last, but it is very organic just always wanting to try new things.

For this project we are really inspired by Underoath, Taking Back Sunday, Plot In You, Saosin, Currents, and Every Time I Die.

Is there a particular process which generally guides the writing of songs?

We so far have really just been a studio writing kind of band. It’s pretty much dissecting and building off of single ideas within the computer and really making the songs come to life. We have brought in a good friend of ours Tyler Ruehl for a couple songs of co-writes which has really expanded our sound and is just a great dude that has helped all of us including himself push to be better and better every day.

For me I really draw inspirations from my past and present experiences. I have struggled a lot with anxiety and depression in my life along with some alcohol abuse to mask my pain and needing that feeling of being numb. I bottle my shit up and music has always been my canvas and therapy to let all that shit out while trying to find the light at the end of the tunnel. We want to have that positive message within our lyrics even when talking about some of the darkest times in my life.

We released our second single Faceless back in September which goes through some of the darkest times of my life. It tells the story of that inner battle with your conscious about the way you are living your life and masking all your pain with substance abuse (in this case alcohol). The best thing that I ever did in my life was allow people into this pain I was feeling and instead of drinking my issues away I was finding comfort from friends and family which is the best thing you can do for yourself in those low moments. We have lost so many fucking incredible talents in the past two years to substance abuse going through similar things that many humans go through, so we wanted that message to be there with the repeating line “I just need to let them in” being those outside voices trying to help you.

We for sure develop all songs within the studio. We generally have a riff or a melody that we build off of and work it out on the grid as opposed to sitting in a room jamming things out that we could possibly forget before we even get into the studio.

I think our energy is what makes us exciting to see. We all love what we are writing and doing as a unit and that energy we put out in a live setting is absolutely contagious.

It is not easy for any new band to make an impact regionally let alone nationally and further afield. How have you found it so far?

I absolutely believe there is always opportunities and we are all pushing for that next milestone for ourselves. In such a digital age we can see where our markets are and plan tours and shows to be more economic without fully wearing ourselves out touring an unnecessary amount.

How has the internet and social media impacted on the band to date? Do you see it as something a negative but essential or wholly positive?

Social media is absolutely toxic but is a blessing to be able to connect more with people who truly enjoy your music around the world. I think this digital streaming age is a blessing though, when you learn how to use the amazing tools provided for you. Music has always been so overly saturated, but it makes it so much easier to target the demographic you are looking for and cutting through all the noise to reach your next milestone or goal.

Thank you guys for having us. To the fans new and old we love all of you with everything we have, thank you all so much for the support at such a young point in this project, we feel truly blessed. We are currently gearing up to release a couple new songs and shooting videos for them in the upcoming weeks and are currently planning some run of shows so look for us in your city!

Like Loading...
‹ The RingMaster Review pulls out the top punk and indie bred releases of 2018
Beth Blade And The Beautiful Disasters – Show Me Your Teeth ›

Tags: A Day To Remember, Avenged Sevenfold, Currents, Every Time I Die, Plot In You, RingMaster Review, Rozu, Saosin, Taking Back Sunday, Underoath