Four years on from their psyche ravaging third album, Dog Years, Canadian noise sludgers The Great Sabatini return with another maelstrom of noise bred dissonance which, to continue a trend set from their first releases, is their most irresistible trespass to date. Goodbye Audio is around thirty five minutes of sonic abrasion as unpredictable creatively as it is expectantly striking; an invasion of raw and toxic noise intent on caustic seduction.

The Montreal quartet of Steve, Sean , Rob, and Joey Sabatini have in many ways continued exploring the less destructive but deviously manipulative essences of its predecessor with Goodbye Audio but equally the new encounter again openly embraces the ravenously raw ferocity and bedlamic seeds of their sound exposed from day one. It makes for a release which tempts, seduces, and flirts with the senses and imagination as at the same time it marauds, pillages, and corrodes them.

As next track, Dog Years quickly confirms this is a new psyche twisting caper with the band though but an exploration unafraid to hint at possible inspirations as the likes of Melvins, Unsane, and Sofy Major come to mind at certain moments across the whole of Goodbye Audio. The second song is an immediate bestial infringement, its carnal instincts fuelling sound and voice alongside intent as it crawls over the senses. Sludge metal and noise punk provide smog of irritability and raw tension but again if with less openness there is an underlying incalculable adventure which teases before exposing its majesty in the outstanding Strip Mall or, The Pursuit Of Crappiness Parts 1-4. The track is superb, from its initial hip manipulating flirtation breaking open a fissure of thick prowling malevolence veined with toxic grooving, that in turn twisting into corruptive punk ‘n’ roll rebellion before finding a quickly corrupted paradise. 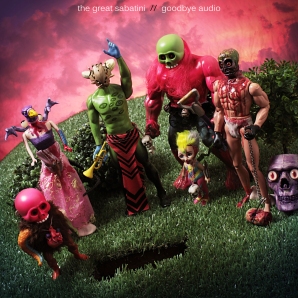 You’re Gonna Die (Unsatisfied) stalks years and thoughts next, the guitar again inviting and taunting with its riffs as rhythms stroll and fly through the skulking throaty bass and swinging sticks. It is a maelstrom of threat and ferocity with the most frenetic prowl while Tax Season In Dreamland provides a feral punk tango exposing scars and lust with equal creative savagery. Its moments of emotionally hazed tranquillity are just as imposing stirring up emotive reflections as potent as the physical reactions its uproar provokes.

Through the shadow draped increasingly contaminated celestial breath of Brute Cortege and the intimidatingly mercurial fourteen minute emotional wilderness of Hand Of Unmaking, the album is brought to a mighty close; both tracks a provocation of body, spirit and thought with the latter a complete trial and adventure of its very own to hungrily immerse in.

We are not afraid to say that The Great Sabatini has been one of our favourite bands for a long time but even that usual readymade submission to their adventures was taken aback by the thrills and spills of Goodbye Audio. If noise annoys run for cover as the Canadians have it down to a fine raw art.

Goodbye Audio is out now on vinyl from No List Records, Ancient Temple Records and No Why Records with a cassette version featuring exclusive bonus track Drain The Swamp available from Pink Lemonade. Head over to https://thegreatsabatini.bandcamp.com/album/goodbye-audio for digital release and more…