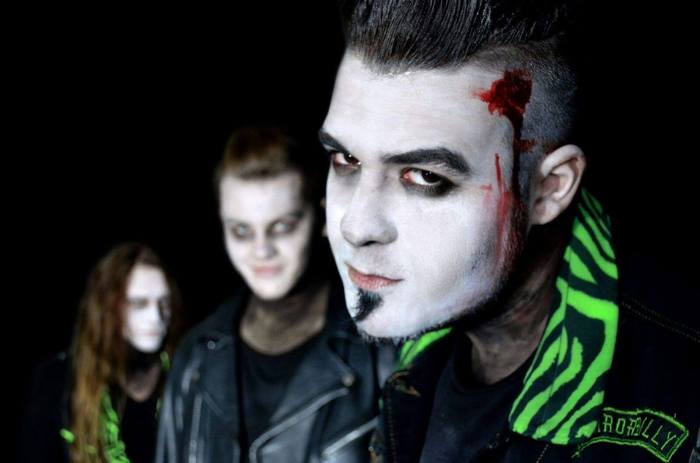 We have not been alone in brewing eager anticipation for the debut album of Italian horrorbillies Motel Transylvania having been infected by the sounds of their They Dig After Midnight EP of 2015 as well as the numerous appearances the band has made on various compilations. Four years or so in the making finally that first full-length has crawled from the corridors of the band’s darkest corners and we can tell you it has been well worth the wait.

Formed in 2013 as a solo project of stand-up drummer/vocalist Toxi Ghoul, Motel Transylvania swiftly became a trio which unleashed a well-received debut single in the ghoulish romance of It’s not so bad. The release of They Dig After Midnight in turn established the Savona trio as a band with a potent sound and creative character equipped with the potential of bigger bolder things ahead. Their self-titled debut album realises plenty of that intimation without exhausting all the possibilities of even greater exploits ahead. Across thirteen views from the mausoleum, the album presents a multi-flavoured proposal embracing everything from horror punk and psychobilly to vintage rock ‘n’ roll, punk rock, and other death strewn hues.

It opens up with the portentously atmospheric Called, an invitation into the album’s crypt as intimidating as it is cinematically irresistible. The piece enticingly opens the gateway to the carnal goodness to come starting with Destination. The gorgeous rockabilly groove which harkens its trespass was enough to enslave attention, a submission swiftly rewarded by Toxi’s senses clipping beats and the dark upright bass grumble cast by Fish “The Scarecrow”. The guitar of Taison Gore continues to spin a web of temptation throughout only dropping its raised adrenaline for a breath to be taken before striking up again with salacious intent before the drummer’s lead vocals share their raw scowls. It is an excellent full start to the release and taster of the band’s richly flavoured and varied sound.

The following track shares the band and the album’s name, Motel Transylvania a rousing slice of horror punk with an early Misfits lilt within a labyrinth of psycho and rockabilly taunting. The predacious trespass of the rhythms and vocal causticity steals the show within a track which quickly left its indelible mark before Her Last Boogie launched its raw rock ‘n’ roll stomp on ears with zeal and increasing enterprise. A blend of the feral and the melodically precise, the track is a slice of death boogie needing little time to get punk hips whipped up.

The outstanding Drowning gives warning enough with its bass bred jaws lure before breaking upon the rocks with its blood tainted surf rock groove and barbarous intent while The Night of the Living Dead speeds rather than lumbers through ears with its The Order Of The Fly-esque stalking though the result is still an inescapable rock ‘n’ roll nagging of ears and the imagination. Both tracks add new shades to the album’s adventure and to the unfolding tales of terror; each new pleasure to devour though both are outshone by 4 and its Mad Sin meets Tiger Army like psychobilly shimmer, the albums best track.

The ghostly plains of Beyond The Lights comes next, its unearthly throes psych rock kissed seduction evolving a carnival of fevered temptation before slipping back into its ethereal decay, while its successor, It’s Not So Bad, coaxes ears with its puckered rockabilly lures before erupting in a punk nurtured hostility, repeating the cycle with greater imagination and psychosis. At every turn the track twists into unexpected escapades increasing its magnetism every step of the way.

Continuing the great multi-textured web of sounds within the album, A Place To End embraces Latin/mariachi hues to its Koffin Kats spiced uproar while the following Dead N’ Proud howls like a psychobilly inspired Frankenstein Drag Queens From Planet 13. In turn the simply superb STOMP! Cockroaches stamps around with a great Demented Are Go inspired irritability, these three alone showing the broad landscape of sound within the Motel Transylvania bloodlust.

I Wanna Be Your Ghoul completes the release, the song another psychobilly nurtured tempting under sweltering skies; gallows rock which has the body swinging as firmly as the cadaverous romance it shares.

It is a fine end to a record which certainly pleased and had praise leaving lips on the first listen but has blossomed to far greater heights and persuasion with every subsequent venture through its sonic charnel house.

The Motel Transylvania album is out now through Undead Artists and Archetype Records.