Spookshow Inc. – Visions Of The Blinded World pt I & II

Four years after Part I unleashed its “furiously agitated entrapment of industrial, metal, and electro rock”, a rousing accompaniment to an impending apocalypse, Part II of Visions Of The Blinded World is here to not only continue the arcane adventure but take it into a whole new level of dark deeds and senses trespassing contagion. The project is from Norwegian trio Spookshow Inc., a band which has been curiously ignored by bigger attention so far, a blind eye which if continuing after the full release of Visions Of The Blinded World will be criminal.

The beginning of Spookshow Inc. goes all the way back to 2003 when Lucky Spook (guitar, programming, songwriting, producer) and Soltex (vocals) came together and began creating and nurturing their individual fusion of industrial and heavy metal with electro rock. As proven by the 2014 released Visions Of The Blinded World pt I, there are plenty of other rich flavours to the band’s asylum of sound, Middle Eastern hues alone an inescapably alluring ingredient. With the band’s line-up completed by bassist/keyboardist Sharaz who featured on the final few songs recorded for its predecessor, the second part of Visions Of The Blinded World is an even richer affair of sound and styles, a bolder adventure in an already eager collusion of essences sure to appeal to any appetites for the likes of Pink Floyd, Prodigy, Rob Zombie, KMFDM, NIN, and Pitchshifter.

Visions Of The Blinded World pt I & II has been released as a complete package and should be listened as one to grasp its full dark majesty though each part firmly captivates alone too. It makes for a journey which leaves ears, body and imagination as aroused as they are disturbed, as inspired and animated as they are haunted. As we have covered part I previously, which you can read here, we will explore the second part of the creative emprise, a canter through the haunting shadows and ravenous dissonance of a dystopian landscape lost in extinction luring bedlam. Note though that the first ‘side’ of the album contains two brand new tracks in the shapes of the Seven Trumpets, a track sparked by the biblical legend of the same name but an echo of a split personality, and the horror movie like Lizard Eyes. 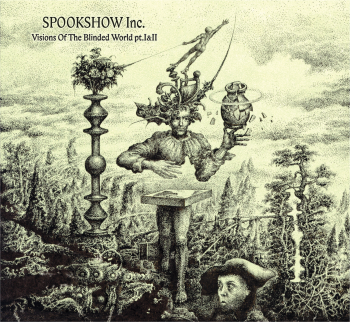 Pt II opens up with Virtual Insanity, electronic sparkling the gateway to an infernal surge of electro rock predation as ravenously hungry as it is virulently catchy. Even so, its instinctive urgency has an underlying premeditation of devious intent, melodies and calmer but darker twists adding to the track’s inescapable invasion. Something akin to Rabbit Junk meets Fear Factory, the track instantly has the project’s second part off to a flyer but also connects seamlessly to the nature and presence of the first part of Visions Of The Blinded World.

Already breathless from the superb thickly rousing start, the band show no mercy as Devil’s Triangle surges in with similarly uproarious energy and intent, Spook’s guitar gnawing away at ears as beats swipe at the senses,  Soltex’s vocals in turn matching their boisterous appetites with eagerness and attitude. Again momentary detours bring darker trespass rather than a chance to take a breath, it all adding up to another galvanic assault.

Next up Mindgame does bring calm, its melodic caresses courted by demonic tones of voice and intimation, a sonic Garden of Eden oasis in some ways. Featuring XRC, the track smoulders with toxic beauty; those Eastern hues enticing with siren-esque seduction as darkness await new arrivals. Enthralling and haunting in its distraction, the song slips away for the advancing savage addiction and voracious heavy swing of Little Pill. Eating away at thoughts and senses from its initial original cinematic drama to its esurient stalking, evil soaking every note and castigating syllable, the track with Subliminal Mentality guesting equally got under the skin and nagged away thereon in.

Blackbird From Karachi with D.Tschirner involved is a deceptive creature; evolving from its initial serenade into another predatory confrontation courting chaos and corrosion with almost pernicious incitement, every moment unpredictable and disturbing before the outstanding Prison Planet casts its specific trap. A galactic tango which had the body bouncing and imagination conjuring as intrigue and espionage fuel every contagious touch, it in turn departs to encourage the emotionally harmful but physically infectious dance of Falling Down Pt. I. All three tracks simply hit the spot, repetition occurring across the whole of the album as proven yet again by the dark carnival of Cold Frantic Boy, this another track mixing flirtation and catchy harassment with cinematic intimation as cold vocals bring their own toxic fascination pretty meaning submission to its dark glamour was inevitable.

Across the likes of Match Of The Century / A. Crowley Vs. A. Einstein with its increasingly volatile and ominous disquiet around a hypothetical chess game between the two protagonists and Kissing In Graveyards featuring Underworld, another slice of aural insidiousness, the album continued taking ears and pleasure into new dark corners, the release magnetically broadening its maze of sound and creative villainy before stretching it again with the glorious Midnight Tango, a mesmeric psych surf piece with a caress of The Doors and Calling All Astronauts to its dark rock ‘n’ roll.

The final pair of Follow Me, a carnal trespass of pestilence-laden temptation, and Battle For Babylon with R. Carey (an English- New Zealand based artist better known as Fiery Jack (The Teapot Goblins)) a guest in its stark yet rousing smouldering epilogue, provide a compelling conclusion to the relentlessly enthralling release. In some ways they lack the rousing bait of their predecessors but in just as many are cast in mutually potent lures of dark emotive suggestion.

As suggested the biggest rewards come from listening to Visions Of The Blinded World pt I & II as one but certainly not essential as proven by the individual galvanic prowess of each track. Spookshow Inc. has created a landscape bred in the world’s turbulence and destruction; Part I made us want to know more, the stunning Part II sparked the desire to be lost in its impeding tempest with the band’s sounds for company.

Visions Of The Blinded World pt I & II is available now @ https://spookshowinc.bandcamp.com/album/spookshow-inc-visions-of-the-blinded-world-pt-i-ii