Home › Music › A Parade of Goodness

A Parade of Goodness

The past month going into the next has seen our friends at SaN PR send over a host of artists with new singles to tempt and rouse the senses. o we thought we would club the best together and give you the heads up on their striking propositions.

First up and coinciding with their next tour of the US, is British punksters Ghouls who have just uncaged their new single Be. An irrepressible slice of the raucously infectious and boisterous punk rock the Londoners are becoming keenly renowned for, the track just bounds through ears taking the spirit with it on a rousing stomp. Yet equally its heart and words reveal shadows and emotions to hook and captivate thoughts and imagination.

Formed in 2013, the quintet has earned a potent reputation and an increasingly growing and dedicated fan base through their songs and a praise wrapping live presence which has seen the band play numerous UK and international festivals and share stages with bands such as Less Than Jake, Slaves, The Skints, The Ataris, Sonic Boom Six, Random Hand, OPM, and ROAM. It is hard not to hear why the increasing attention on the band when hearing Be and also a handful of months back its predecessor, the similarly bold and compelling Internet Famous.

Be is an immediate blast of catchy sound driven by swinging rhythms and rapacious guitars. Just as swiftly though it is a bloom of imagination and unpredictability, calms and crescendos plus brass flames adding fun and adventure to its dynamic punk funk antics and though seemingly over before its time, the track is as arousing and manipulative as anything heard this year; simply a real gem of a song.

Next up is Dead Ground, an alternative rock trio from Exeter consisting of Ollie Harris, Edward Tucker, Jake Friese-Greene who has just released their new

single, We All Feel The Same, another song rather hard to ignore.

Emerging in 2015, the British trio has earned plaudits through shows with the likes of Idles and Black Foxxes and are sure to again through their latest offering. It is a song which echoes inspirations which include Muse, Black Peaks, and Radiohead though it is the former which most comes to mind across the magnetic track. Even so, from its first breath and the strong lure of voice and guitar, We All Feel The Same shows the band’s music has its own unmistakable identity. The track is a calm yet eventful piece of melodic rock which never seems over busy or creates a tide of sound but is as rich in enterprise and aural intimation as a full on tempest.

With smart twists and little turns within its magnetic body, the track is another seriously enticing offering from Dead Ground and a potent invitation to newcomers. 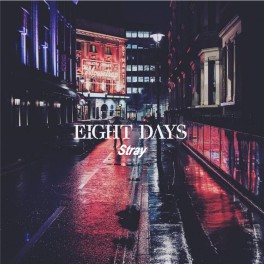 The wait is over, British punks Eight Days have returned from their eighteen month hiatus and roared back with a major holler of a track.

Stray barracks and harries the senses like it is making up for lost time yet has an imagination in its creation which revels in the time taken to breed its angst bursting outcry. Equally is has a fresh breath to it which echoes the potency and character of the band’s very well-received 2016 EP More To Life but reveals a whole new thrust of energy, invention, and potential, maybe no surprise as Eight Days returns with new members offering new ideas and essences in creativity.

A fusion of punk, hardcore and alternative rock in varying degrees, the track immediately had ears on board as its opening lure of hook loaded riffs beckoned. It proved the prelude or rather lead into a tempest of ferocity and sonic tension but an emotion loaded storm ripe with swinging grooves, tenacious rhythms and subsequently unsettled calms and post hardcore-esque intimation.

The track is a fine return by the band and hopefully a hint of big things to come.

With their debut album of this year, Face Value, still luring new fans and plaudits, UK hardcore outfit Of Legions are poised to unleash their new single Vision Of Misery. A brand new track, it is a

beast of a trespass, a cauldron of the band’s fusion of hardcore, punk, and metal which not so much warrants attention but orders it.

From Stoke, the quartet has steadily risen up the hardcore ranks since emerging in 2015. Embracing inspirations from artists such as Black Flag, Slipknot, and Parkway Drive, Of Legions has honed their individual sound across two EPs and that recently their highly praised album and earned a potent reputation for a live presence taking in shows with Silent Screams, Liferuiner, Martyr Defiled, Continents, Brokencyde, Sikth, and Loathe among many others.

Intimating a new wind of adventure in the band’s sound, Vision Of Misery prowls the senses initially, riffs a scowling predator against a rhythmic rumbling. A melodic tendril though lights its advance calming the intensity a touch before the shackles are off and the track invades. There is still somewhat of a restraint to its attack but that only accentuates its power and animosity.

Continuing to bawl and punish with its hardcore bred, metal infested confrontation, a contagious mix despite its punishing tempest, the track is a thick indisputable declaration of a band heading the way of major attention.

Be from Ghouls is out now.

Dead Ground has We All Feel The Same on the loose now.