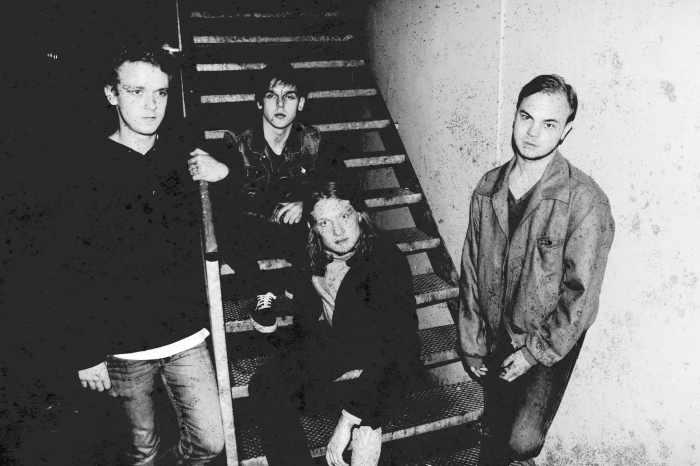 Pointless is the debut EP from Danish outfit Rolled Up Sleeves and is being recommended to fans of bands such as The Strokes and Arctic Monkeys. Whilst you can understand the comparison to some degree it does cover the real to the imitable breath and individual prowess of the quartet’s sound. Creating rock ‘n’ roll bred on the instincts of punk, garage, and more old school rock, the band unleashes a rousing roar which certainly within Pointless is eagerly contagious.

Hailing from Århus, Rolled Up Sleeves is a young band in presence and individual ages consisting of Christian Askehave, Magnus Krag Nielsen, Oliver Alexander Landgren, and Søren Schroll Rasmussen. Apparently they have been kicking up some real attention in their homeland and it is easy to hear why through their new four track release. Receiving its international release through Mighty Music, Pointless immediately gets down to business with opener Happy And Alone. Straight away beats rap at the senses, stabs of guitar swiftly joining their baiting presence with spicy grooves in close quarter. Once hitting its infectious stride, the track stomps along with attitude in vocals and swagger as hooks work their devious intent. It has a bit of an old friend feel to its character but the song is as fresh as anything heard this year and all addictive contagion to our ears with a bit of a Escobar meets The Senton Bombs scent added pleasure.

The rousing start is only continued by next up Junkie In Disguise. Its opening lure, a single seductive guitar invitation ensures intrigue was rife, the subsequent burst of sound feeding that interest whilst sparking greater urgency in track and reaction. Of all four songs, the second is easiest to recognise those earlier mentioned references within but again individuality is soon riding high amongst its boisterous rock ‘n’ roll. Bold and tenacious with a great raw edge to its sonic and melodic enterprise, the track equally hit the spot before Sell My Soul revels in the band’s calmer side. From vocals to melodic shimmer, the song is sheer temptation; sultry and suggestive at every turn with a low key but inescapable catchiness in its presence and somnambulistic sway.  Yet there is a fire in its belly which catches flame from time to time, heat which gives even greater temptation to song and ears.

The EP’s title track closes the encounter up, Pointless a muscular attitude loaded offering alive with tenacious grooves and invasive hooks amongst biting beats. The dirty grumble of the bass is just as enticing as the lustily roaring vocals; a combined web of enterprise creating one rousing roar ending one thickly satisfying release.

It might be fair to say that Rolled Up Sleeves have yet to breed major uniqueness in their sound but again we can only say that it is as fresh and exciting as anything around right now; Pointless the proof.

The Pointless EP is out now via Mighty Music.