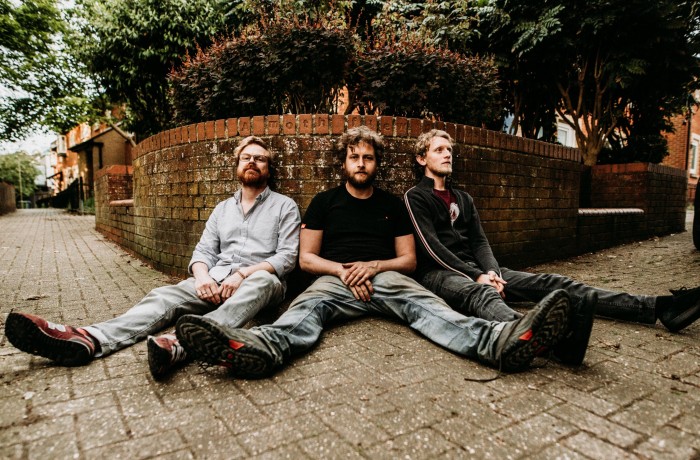 Simultaneously teasing and engaging the imagination from start to finish, Geodesics is the new EP from British instrumental metallers Masiro. It offers up six tracks which take the listener on their own inspired journey through realms of creative intimation and magnetic craft; a collection of pieces which provide a straight line to pleasure but across a landscape of adventure which curves and fascinates like an aural kaleidoscope.

A trio hailing from Oxford, Masiro consists of original founders in guitarist Mike Bannard and drummer Chris Pethers, the band emerging as a duo in 2011, alongside bassist Chris Hutchinson Mogg formerly of ex-50ft Panda. Scented by the inspirations of artists such as Meshuggah, Primus, Mars Volta, Animals as Leaders, 65 Days of Static, Psyopus and many more, their music is a tapestry woven from strains of mathcore, progressive metal, and post rock though that only skirts over its varied richness. The band soon drew acclaim once releasing debut EP Technocologist Unknown in 2016, praise and recognition only thickened by their live presence which has seen them share stages with the likes of Poly Math, Core of IO, Iran Iran, and Kusanagi as well as festival appearances.

Geodesics is surely set to see Masiro lure even greater and broader recognition and plaudits their way, though strangely it is an encounter which with us depended on close attention to be really seduced and enthralled. As background support to whatever maybe needed to be done, it is a certainly fully enjoyable but a touch too easy to have distractions take charge but sit ears down with headphones and record and Masiro had us lost in its riveting web of craft and imagination whilst bouncing to its dynamics and suggestive incitement.

The EP swiftly entices with opener Andromeda Handshake, the track almost instantly a sonic chasm of turbulence but from within which tendrils of melody bred guitar wrap around ears and imagination The snarling almost bestial tone of the bass keeps the threat alive whilst rhythms pick their spots with rapacious intent. The tempest though breeds melodic radiance, it being swallowed once more but only to wait its moment to crystalize air and the rich temptation it ignites. Perpetually evolving, the track transfixes from start to finish with its mercurial flight.

The following K-Ursa is a far calmer proposition from its first breath. Featuring the saxophone prowess of Charlie Cruickshank, the song is a warm almost summery canter but with bold flames in its sultry climate. Again though there is a volatile instinct to the music, one which never fully ignites but brings a thought inspiring temper to the melodic beauty woven and eventually incites it all to come to a fiery head for its finale.

Both tracks also revel in an array of infection spreading hooks and twists, a creative agility just as potent within next up 21:15. With shadows courting its lining and depths, the track is a dark almost predatory controlled waltz, always intimating a portentous outcome even through its melodic elegance; a threat accentuated by the throaty growl and crawl of the bass and Pether’s agile swings. As all tracks it sends thoughts off on an exploration, espionage and danger courting their conjuring this time around.

The sonic displacement of Intermission: Graveyard Orbit with Lee Riley supplying drone dissonance intrigued if not much more and is soon forgotten as the outstanding End Permian emerges from its raw mists. Instantly a nagging groove had us hooked, its guitar lure increasing as the bass seduced as it prowled with slight irritability amidst a shimmering melodic glaze. Subsequently, as you can rightly assume, the piece gyrates with ideation and individual craft aligned to a united imagination, every slip into something new as fluid as it is expectantly unpredictable.

The release concludes with Grand Trine, another inescapable incitement of emotional and physical response. It is carnival of eager bordering rabid enterprise, the band’s mathcore instincts dancing like a dervish around relaxed moments of equally compelling melodic insinuation. As with all tracks, where it takes you will be as individual as the sounds provoking your imagination and as each we suspect leaving little else but pleasure especially the deeper you immerse in its creative emprise.

That is the same for Geodesics as a whole, give it your total time and attention and the rewards verge on the irresistible.