With a mere but rather tasty single in between, it has been a long wait for the successor to their highly enjoyable and highly praised third album Big Cat Love but finally US rockers Smash Fashion have unleashed its successor in the shape of Rompous Pompous and a devilishly mischievous and captivating proposition it is.

Eagerly anticipated, the album lives up to its excellent title with eleven slices of multi-flavoured rock ‘n’ roll which romp and stomp in a way only the La quartet can. As ever the band feeds on rich rock essences from across the decades; everything from fifties rock ‘n’ roll, sixties mod and psychedelia through to seventies punk/new wave aligned to eighties glam and hard rock going to flavour a sound just as spiced by subsequent years and modern enterprise. As its predecessor, Rompous Pompous is an adventurous and lustily fun stomp with the band but with even keener diversity and a sharper definition to its writing, performance, and character.

It opens up with Can’t Take You Anywhere and straight away a potent hook with something more than familiar to it keenly entices. It is just a lure though into the song’s own invention with the vocals of guitarist and band founder Roger Deering swiftly to the fore. Its classic rock breeding is littered with new wave and seventies pop rock flirtation, the tenacious rhythms of bassist Scarlet Rowe and drummer Reijo “Repo” Kauppila driving its boisterous stroll as lead guitarist Lloyd Stuart Casson weaves real temptation within the just as magnetic tease of keys.

It is a potent start to the release ensuring attention is firmly on board and equally strong as the following Soft As A Rock (Helium Head) takes its place with an air of Cheap Trick meets The Motors to it. Its infectiousness is swift and eager as hooks join grooves in casting a net of catchy enterprise around Deering’s ever alluring presence while within the album’s following title track the band pulls the listener in with a fifties rock ‘n’ roll nurtured saunter with a delicious B52’s-esque lilt to its blossoming revelry. The track is superb also hinting at the respective glam/art and hard rock of bands like Sparks and The Tubes as it caught ears and imagination. 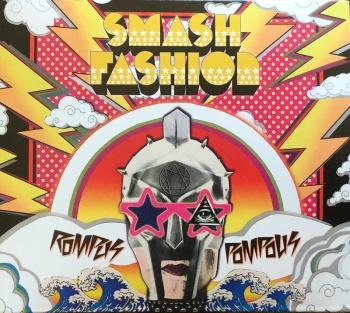 Wolves Of Wonderland brings a blues flavouring with its steady hard rock canter next with not for the first time just a sniff of Queens Of The Stone Age to the melodic graining while Teenage Demon is a punk ‘n’ roll courting holler with a garage rock lining which swiftly had feet and neck muscles rocking. Again there is no missing a seventies/eighties seeded nature to the excellent track; a regular ingredient in the increasingly individual Smash Fashion sound.

Another putting a firm hand on best track honours is the Bolan-esque Proper Way To Eat A Muffin, its flirtatious almost salacious swing aligned to classic rock ‘n’ roll equipped with power pop boisterousness and lyrical devilment. Quickly and unerringly hitting the spot it had the body eagerly swinging before Runs In The Family adds further diversity to the release with its pop, punk and melodic rock collusion with a great resemblance to The Vapors to it. It too is one of the major highlights within Rompous Pompous closely matched by the Bowie kissed Tender Was The Hook, a song also embracing a sixties tone with a Hollies like scent to it.

Through the likes of the blues rock sprung Ugly Thugly and Gentle Hand with its slightly dirty melodic radiance around one irresistible hook, the album continued to light up ears even if neither song quite lived up to the heights of those before them. Nevertheless each left thorough enjoyment in their wake leaving the emotive balladry of Smiles & Daggers to bring the album to a fine close. Beginning with drama carrying piano with big shadow clad rhythms in close company, an entrance reminding of a certain Boomtown Rats classic, the song is a magnetic example of the more mature and bolder songwriting within the album. As all songs, deeper into its body you go more the different flavours and twists emerge to please and fascinate.

And that applies to Rompous Pompous as a whole, a release which gets you going from the off and just gets more intoxicating and infamous by the listen, much like Smash Fashion themselves.

Rompus Pompous is out now via Electric Pudding Recordings across most online stores.