Buñuel – The Easy Way Out 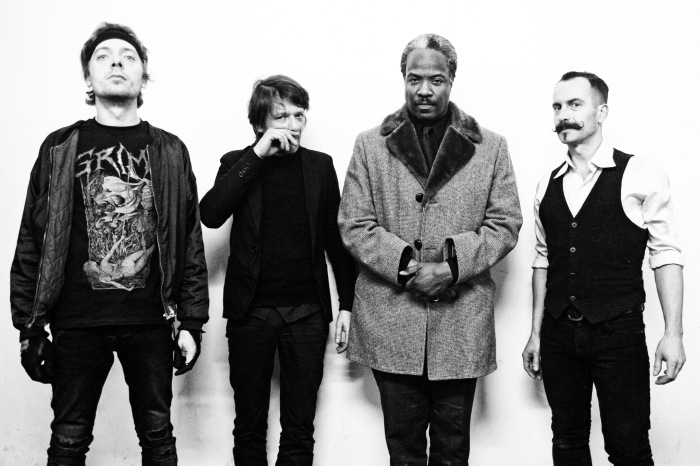 If the soundtrack to the fall of the world is The Easy Way Out, the new album from Buñuel, then our arms for one can easily embrace the demise of all. The eleven track tempest is simply glorious, a collusion of sonic and emotional dissonance within a voracious carnival of noise which devours as it seduces.

The Easy Way Out is the successor to the quartet’s acclaimed 2016 debut album A Resting Place For Strangers, a release pushing the walls of the former’s ferocity, imagination, and psyche twisting trespass far further. The US/Italy hailing foursome create an often suffocating, frequently corrosive, and perpetually rousing assault of invention from within its walls, taking ears and emotions on an visceral rollercoaster ride fronted by the vocal prowess of Eugene S Robinson, already renowned for his part of Oxbow. Like a barker to its twisted sideshow but decisively more ringleader than narrator, his lyrical inharmony breeds a vocal dissidence and tenacity which is pure magnetism. Equally the ravenous sounds cast by bassist Pierpaolo Capovilla and drummer Franz Valente (both One Dimensional Man, Il Teatro Degli Orrori) alongside guitarist Xabier Iriondo (Afterhours) inspire as they corrupt, arouse as they deviously manipulate.

Opener Boys To Men emerges from its dark depths on a ponderous yet hypnotic prowl, Robinson instantly crawling all over its muscular drone bred awakening with vocal aberration as delirious as it is lucid. Inescapably transfixing across its increasingly tempestuous, intense fibrous yawn, the track invades like something akin to Swans meets Pere Ubu, and simply had ears and imagination afire.

The Hammer / The Coffin follows and instantly takes its own tight grip on attention as the feral temptation of Capovilla’s bass aligns to the swinging rabidity of Valente’s beats. Vocals and guitar toxicity are soon infesting song and listener, their carnivorous discord raw contagion as the noise rock seeded invasion swiftly has body and thoughts bouncing with equally bedlamic eagerness before the track releases its puppet into the waiting subversive rock ‘n’ roll jaws of Dial Tone. Harmonic toxins vein the boisterously bruising stomp, lighting up its heavy tenebrous flood of sound to easily get under the skin whilst exhausting the senses though it in turn is just a warm up for the even more debilitating roar of A Sorrowfull Night. With strand like hooks recalling The Fall within its tsunami of voluminous sound, the track is a post/noise punk trap to which capture and addiction was a done deal within its first few breaths.

Next come the monotonous sludge thick advance of The Sanction where rhythmic and citric enterprise bewitch alongside the ever compelling presence and dexterity of Robinson while Happy Hour twists and turns straight after like a punk dervish, flinging visceral grooves and sonic splinters with relish. The first of the two epitomises so much of the album with its mercurial landscape, its unpredictable terrain of imagination evolving and wrong-footing with ease, the second a less pronounced but just as inspired echo within its carnal punk ‘n’ roll.

Next up is The Roll which is simply magnificent. From its opening dance of keys against the raw discordance of the bass, the song invites as it taunts. Female vocals alongside Robinson similarly grab ears as they light the hungry onslaught before Augur stalks and fingers the senses with its rock ‘n’ roll schism. Like a meeting between Big Black and The Filthy Tongues with Shellac looking in yet truly unique to Buñuel, it is raw magnetism from start to finish.

Shot is just wild noise punk at its best, fifty seconds of anarchy before Where You Lay intimidates, threatens, and physically harasses the senses and psyche. Vocally, Robinson is as imposing and invasive as the sounds uniting around him, the track like a disconnected tangle of sinews and tones coming together layer by layer never disguising the portentous corrosive outcome their unity will bring.

The album concludes with Hooker, a final but accepting fissure on the album’s theme within a sonic misting as toxic as it is deceptively calm; a last corroded breath in the stark, barren outcome of the album’s sonic apocalypse.

With the amount of releases we are blessed to be sent it is not too hard to find plenty to get excited over but to be truly blow away by it a rare occurrence but one The Easy Way Out achieved. It is a definite album of the year contender with already a grip on top spot but easy to suggest also one of the decade’s most essential moments.

The Easy Way Out is released July 27th via La Tempesta International and Goodfellas Records.