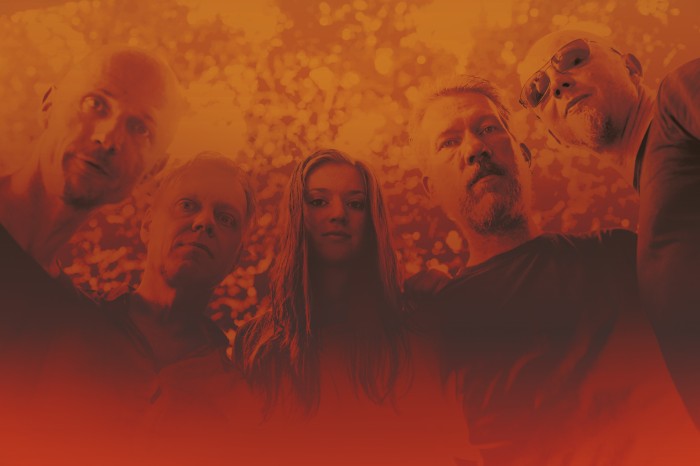 Though Black Space Riders teased us with the news that the successor to the outstanding Amoretum Vol. 1, released this past January, would also be uncaged this year maybe few expected it to swing into view within six months of its acclaimed sibling. But indeed it has and we for one could not be any more pleased because it is one stunning slab of what the German outfit does best and which is individual to anything else.

As Vol. 1 took the listener into the dark depths and thickly shadowed corners of the modern world with intimations of hope and resolution its successor “explores the tension between darkness (fear, hate, rejection) and light (empathy, love, acceptance).” Their title is a fusion of the words Amor and Arboretum, the band’s symbolic reference to the sanctuary of nature and love. The creative and musical link between the two is strong and open; no surprise with the tracks from both albums written at the same time in 2017 and recorded together, yet Vol. 2 has a devilment in its imagination and body which makes it an even more unpredictable and at times bewildering experience. The second book in the concept flourishes whether standing alone or as a continuation of the first. Its press release asks, “Is Vol. 2 the rebellious older sister of Vol. 1, or the young, untamed brother?” Often it seems like an alter-ego, a kind of Riddler to the first’s Edward Nygma or indeed both making up a sonic Magneto where light and dark entangle for varied shades of captivating character.

The quintet of JE (lead vocals, guitars, keys, electronics), SEB (lead vocals, keys, percussion, electronics), C.RIP (drums, percussion, digeridoo), SLI (guitars), and MEI (bass) have also conjured the most eclectic flavours within their sound across the fourteen tracks of Vol. 2; at times it blazes with punk like ferocity, in other moments trespasses with metal bred inclinations before seducing with pop rock irresistibility and psych rock magnetism with plenty more in store along the way.

Set over six chapters, it opens up with Before my eyes, percussion luring ears into the snarling jaws of the track. Punk, metal, and rock all collude in its grizzled climate, grooves aligning to crisp rhythms as vocals growl. In no time it had the body bouncing and vocal chords gurning, contagion soaking every second of its forcefully magnetic enterprise. The clang of post punk guitars only adds to the irresistibility before LoveLoveLoveLoveLoveLoveLoveLove Love (Break the pattern of fear) slips in on a dark saunter. Initially it shares a Bauhaus like breath before breaking into a garage punk meets alternative rock stroll though, as becomes the norm in songs, it begins evolving by the minute if not the second. If the opener was bliss to the ears, its successor was pure rock ‘n’ roll manna and it proved just the beginning of one exhilarating ride with Black Space Riders.

Next up is Walls away, a far calmer affair with a melodic temperament which captivated from its initial lure. It has a raw undercurrent though which accentuates its elegance breeding, that aforementioned unpredictability lurking at every corner while Slaínte (Salud, dinero, amor) has a Celtic lining to its infectious festivities; an Irish Gaelic inspiration which again had the body bouncing across its primarily instrumental canter sharing “good health”.

Assimilating love leaps in straight after, its punk ‘n’ roll grumble a collision with grungier textures and space rock dynamics as it harasses ears with rousing irritability before In our garden serenades the senses with its melancholic caress. Something akin to the dark rock of Dommin in an embrace with the neo folk of Death in June within an indie sunset, the song is as enthralling as it is sombrely radiant as too the following track, Leaves of life (Falling down). For us the song is part of the pinnacle of Amoretum Vol. 2, though such its lofty heights we continue to debate that point as thoughts change by the listen. It has an energy which infests body and spirit but equally a dark glow which draws attention and the imagination like a moth to flame, and there is a definite heat to the track as its intensity and contagion rises.

Its glory is then more than matched by Body move, a quite magnificent and addictive slice of creative manipulation which has the body swinging to its funkiness and vocal chords clinging to its virulent delivery. Pop, funk, trip hop, and infection do not come any better and wonderfully invasive than this; the imagination as firmly locked into its growing web of drama.

The dub lit and outstanding Take me to the stars had hips swaying without thought within moments next, the song another weave of individual flavours in a wholly unique yet strangely familiar bold croon while Ch Ch Ch Ch pt. I (The ugly corruptor) emerges from a sonic mist to cast psychedelic hues and intimation before Ch Ch Ch Ch pt. II (Living in my dream) draws ears through the former’s growing raw volatility into its own tempestuous heavy rock envelopment, those already in place psych flames and sighs cascading off its feral storm.

The album’s final and sixth chapter is made up of firstly the melodically wired but still gnarly Chain reaction which is followed by the devilish rock pop bred No way. The first of the two did not grab us as its companions but still leaves most tracks heard this year chasing its wake while the rousing second has a whiff of pop, psych rock, and death metal to its inimitably catchy almost fearsome clamour.

Finally The wait is never over concludes the release, the track another kaleidoscope of flavours with echoes of Ruts DC in its dub shimmers and Helldorado in its swarthy atmospherics. It is an initially low key close, a kind of epilogue but one which just transfixes from its irradiant start to its ravenously tempestuous middle on to its apocalyptic climax.

Well Black Space Riders has done it again, had us drooling at their ever startling endeavours. Quite simply Amoretum Vol. 2 is immense in every aspect. It is a treat from first to last wave of imagination and creative devilment but we suggest listening to both Volumes of Amoretum as one for a complete rush of inspiration and pleasure.