Having earned a strong reputation for their live shows and energy, Scottish outfit Dead By Monday are out to spark similar praise on a broader scale with the release of debut EP, Almost Punk. Offering four slices of ferocious punk rock with an almost deceitful character as they reveal a far richer breeding of flavours once immersed in their roars, it is a release which not only warrants attention but pretty much commands it.

Formed in 2016 within the Glasgow music scene, Dead By Monday has as mentioned drawn great plaudits for their live dynamic and aggressive presence which has been rewarded with gigs alongside the likes of The Living End, Daggermouth, Annewrage, and WRCKG. Initially coming together with the intent of creating politically charged punk rock, the foursome soon found a harder, harsher, and heavier sound emerging but one still embracing their punk rock hearts alongside inspirations from the likes of Rage Against The Machine and The Dillinger Escape Plan, NOFX, and Gallows. Almost Punk is their first nationwide trespass and a very potent introduction it proved to be. 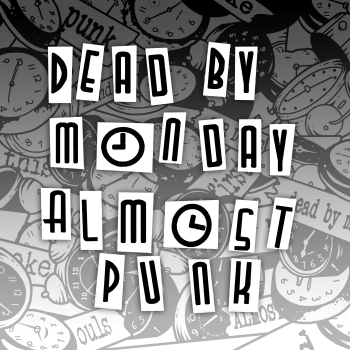 Certainly the EP was a slow burner with us, making a good first impression but really blossoming over time and listens as its creative depths emerged. The release opens with The First, and instantly had attentive ears with its simple but efficient opening punk bred riff. Paddy Chapman’s guitar is the lure, the throbbing bassline of Declan Buist a waiting trap before the song explodes into its rapacious and irritable stroll. The gruff tones of vocalist Murray Taylor are soon sharing its grievances as the swinging beats of Ciaran Whyte spark the track’s contagious gait and energy. There is little particularly unique about the track at first but with its mellower detours and sharp hooks grows into an ear grabbing proposal, those animated rhythms of Whyte particularly magnetic.

The following Dead Souls soon overshadows its predecessor, the excellent track a bruising slab of punk ‘n’ roll with a tasty line in hard rock to its twists and turns. Again Taylor’s vocals almost bully the listener as surrounding sounds work on their rocker instincts while spiky hooks and gang vocals make for an additionally tenacious incitement. Firmly the song took best track honours, though it was swiftly challenged by next up Our Doomsday. Straight away Whyte’s rolling punches had attention gripped, Buist quickly backing up the rich coaxing with its own throbbing bait. It is a magnificent start which in some small ways is followed by an anti-climax as the track opens up into its grouchy punk holler but it is a mere quibble as the track soon seduced the appetite with its snarling attack. There is something of Stiff Little Fingers to the song at times which does it no harm at all, indeed helps make it another bright spark in the growing potential and ready-made enterprise of the EP.

The closing Choke brings a post hardcore tone with its opening strains, clean vocals from Taylor strongly enticing with an underlying emotive warble well backed by the harmonic tones of Whyte. Eventually its captivation leads to the ferocious heart of the song, its hardcore instincts expelled with force and dexterity for a caustic finale. The most inventive and unpredictable track on the release it also challenges for top song honours, holding it for a while with its outstanding start and engaging imagination.

Almost Punk is an ear grabbing introduction to its creators but it is the potential and instinctive invention it carries and of which it suggests there is much more to come, that makes it more than just a great first encounter.