Skullcrush – Visions of the Firestorm Eclipse 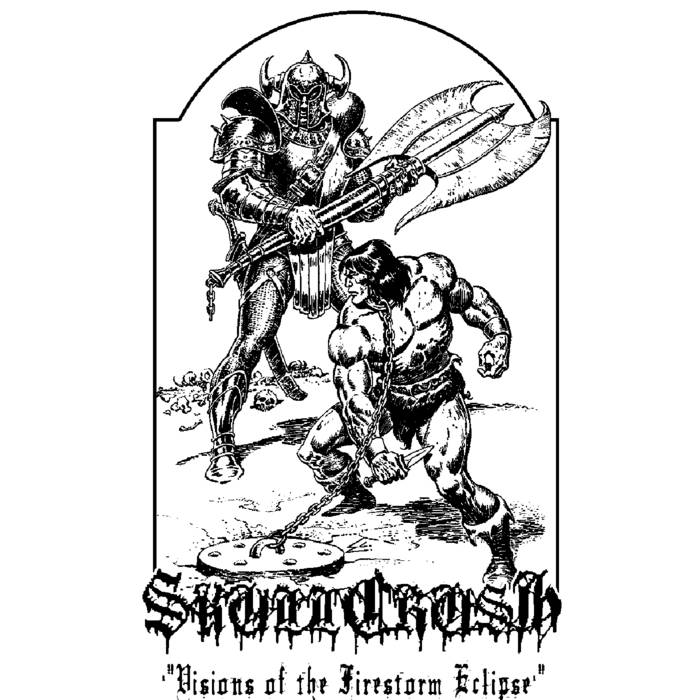 Sure to leave you feeling tainted by its visceral scourge of noise, Visions of the Firestorm Eclipse is the debut EP from death metallers Skullcrush, a band we believe hails from Phoenix, Arizona. There is little more we can tell you about the outfit but plenty to share about their four track offering released through Glasgow based metal label Camo Pants Records.

Visions of the Firestorm Eclipse unleashes sounds which more than lives up to the band’s name. Death metal with a foraging element at times of doom to its character, the EP is an invasively corrosive animus of filth laden debilitating sound whether going for the jugular or wearing the psyche down over time. It opens with Spectacle of Suffering, a ruinous ear blasting, senses ravishing onslaught bursting from a sonic dissonance with an invasive groove which swiftly got under the skin. Around it riffs savage and rhythms bludgeon; vocals a dirt clad infestation of malevolence accentuating the decayed enterprise assaulting the listener. Embracing shifts in its attack and venomous contagion, the track is a pestilential treat of an introduction to the band; alone ensuring a want to keep a close ear upon its creators.

The following Mists of Blood quickly backs up the potent start with its own death metal pillaging of the senses. As its predecessor, it too has a swing to its creative antipathy which ebbs and flows in its central lead but never relinquishes its impact as the track’s black heart and toxic air blossoms. As its own sonic dissonances brews and overwhelms, darker and heavier rancor fuels new twists and shades of the gall spewing feud; each bringing open enterprise within the suffocating smog of noise.

Entrails Ablaze similarly yet uniquely springs a spiteful contagion from its voracious loathing, the track a brief but memorable slab of virulent ferocity which is almost punk like in its feral savagery before the, in comparison, epic grudge of Hellwater takes over the infernal trespass. This is where that collusion of death and doom really comes together, the track a bestial malignancy which emerges with a relatively lively stroll to its violation but as the minutes pass slips into a defence sapping lumber consuming the senses and spirit with every increasingly exhausting and despoiling step.

It is fair to say that Visions of the Firestorm Eclipse is an attention grabbing and increasingly impressing first listen to Skullcrush with the potential within its four hostilities as intriguing and exciting as the tracks themselves. It is not for the weak hearted or for those with a nervous disposition, in fact it is a toxicity all should fear but eagerly embrace.

Visions of the Firestorm Eclipse is available now on cassette and as a digital download through Camo Pants Records @ https://camopantsrecords.bandcamp.com/album/visions-of-the-firestorm-eclipse