The word is that Dutch outfit Canshaker Pi is one emerging proposition sparking excitement and keen attention at every turn.  Now having been introduced to them through their first album it is easy to hear why. Naughty Naughty Violence is a devilishly magnetic and creatively mischievous indie rock romp; one spawned from a fusion of ear grabbing flavours equipped with an arsenal of hooks to make a Cenobite jealous.

The Amsterdam band’s sound is bred through varied strains of rock, punk, indie, and noise woven into a web of rhythmic and sonic manipulation. Since forming, the quartet has earned increasing attention and praise through their music and a live presence which has seen them share stages with the likes of The Cribs, Car Seat Headrest, Parquet Courts, Pip Blom, and Scott Kannberg’s Spiral Stairs and this year alone gather plaudits from playing Eurosonic, SXSW, and The Great Escape. That Pavement link is maybe no surprise as the band’s sound has a certain spicing of them and no doubt helped the band grab support slot on Kannberg’s side project’s tour in 2017 and continues with Canshaker Pi’s debut album being produced by Stephen Malkmus.

Naughty Naughty Violence swiftly shows that there is a definite individuality to Canshaker Pi’s sound, one not necessarily unique but springing a fresh and distinct character of imagination and flavouring which quickly got under our skin. Album opener is Pressure From Above, a song instantly teasing with an electronic wag of its creative finger and soon bursting into a fuzz fired boisterous stroll. As calm vocals join in, the track relaxes but is soon romping again bringing greater clamour and tenacity to its contagious rock ‘n’ roll. Already it is easy to sense that Pavement inspiration and too of bands like The Mai Shi, a kaleidoscope of hooks and melodic unpredictability additionally lighting the great beginning to the release. 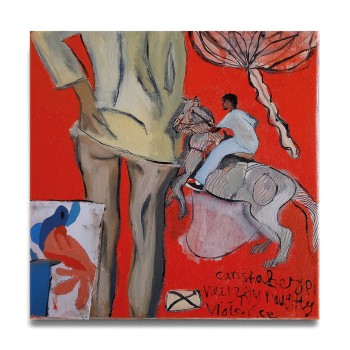 It is a start soon eclipsed though, the initial off-kilter sonic lure of next up Tonsil enough alone to ignite our discord loving instincts. It is a kind of false start but the trigger to the glorious swagger wearing exploits of the track, that continuing discord a delicious clamour of temptation and trespass often enticing like a raw pop fuelled mix of Shellac and The Melvins. The final sonic sigh of the track drifts into the opening vocal and sonic discordance of Sooner Later. Around a compelling bass throb, the brief but dramatic track ignites and disrupts the senses, noise and voice a volatile incitement driven by the irresistible manipulation of the drums.

Three tracks in and fair to say we were hooked and only dangling with further enjoyment as Smurf uncaged its infectious canter like a grunge inspired Fountains of Wayne next with the following If Kelly Doesn’t, Then Who Will calming things down with its melodic and rhythmic pop ‘n’ roll. Neither track quite sparked the more lustful responses caused by their predecessors but ears could not evade being caught up in their individual and increasingly persuasive captivations; the latter especially as it just blossomed play by play to have us bouncing around as forcibly as its own endeavour.

But Why provided one minute of rousing noise rock next, rhythms humping ears as guitars meddle with the senses and vocals tease. With not even a breath allowed between them, No Sack, No Way saunters in to match its success, an immediate ear enslaving hook steering its lure. It is matched in magnetism by bass and vocals, each a controlled but virulent tempting entangling for even greater seduction of the imagination. Pop rock has rarely been heard more addictively in our speakers though its successor Put A Record Out with its ballsier rock ‘n’ roll was more than a match as it unleashed its resourcefully fiery clamour around further rhythmic machination.

In contrast to its raucous blaze, Legless provided a calm almost solemn amble through sound and imagination. The outstanding track carries something of early Cure meets Dinosaur Jr to its tantalising slow post punk sway while The Indie Academy straight after is up on its heels swinging along with pop rock devilment to almost as imposingly please.

The final pair of Half Book and Beautiful World brings the album to a potent conclusion, the first of the two again inventively merging flavours and eras with its post punk/pop punk infested rock before the second leaves ears immersed in a shadow wrapped melancholic croon with its own infectious gait and enterprise boiling up to a rousing corrosive climax.

Naughty Naughty Violence is an album which was really hard to move on from which tells you all about its exploits and temptations. As we said at the start, Canshaker Pi is being very highly talked of right now, their new album gives all the reasons why.

Naughty Naughty Violence is out now through Excelsior Recordings.