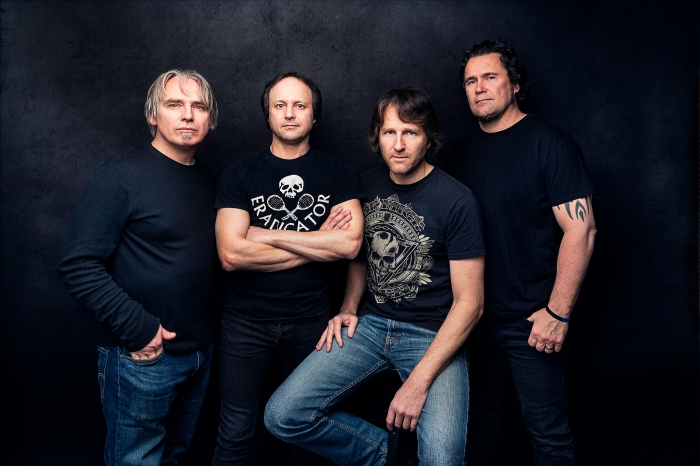 Recent times have seen a growing wealth of eighties bred metal bands rising from their assumed demise or slumber. Thrash metal especially seems to have that power of resurrection. Some of those bands are venturing into new areas, some simply continuing what they did best back in the day which lured potent attention, success and reputation. Infrared sits in the second camp, their love and hunger for classic thrash openly inspired by contemporarys like the Big 4 as well as the influence of Sabbath, Maiden and the likes. As old school thrash never dates or tires in our ears, a resourcefully woven and imaginatively delivered encounter of said genre has a welcoming place and the new album from the Canadians is that and more.

Hailing from Ottawa, Infrared grew from local legends to stirring real attention within the national metal scene. Their sound was and is rooted in 70s and early 80s metal, bands such as Accept, Scorpions, and Judas Priest alongside those already mentioned inspirations on the quartet. Their rise came to a halt as life took members down different paths until 2014 saw three of the original four reuniting; vocalist/guitarist Armin Kamal, guitarist Kirk Gidley, and drummer Alain Groulx coming together again. Original bassist Shawn Thompson had since relocated to Miami so Mike Forbes was brought in to complete the line-up. The foursome then released debut album No Peace which featured songs written all those years ago. Now successor Saviours brings eight brand new tracks to ears, songs which swiftly grabbed ours as themes of “demagogues, dictators, and religious leaders professing to be the saviours of the world but instead inflict the most brutal attacks on humanity imaginable” roared.

Saviours erupts into life with Project Karma its opening magnetic yet portentous lure, one becoming even predacious as it prowls the senses. A delicious groove spears it’s stalking, a swinging proposal aflame with sonic enterprise and rhythmic incitement. Its initial lengthy instrumental is irresistible and only accentuated once the warrior tones of Kamal backed by the band head the song’s even fuller assault. Familiar and fresh hues collude in its web, imagination blossoming across its fiery body as a tremendous start to Saviours is set. 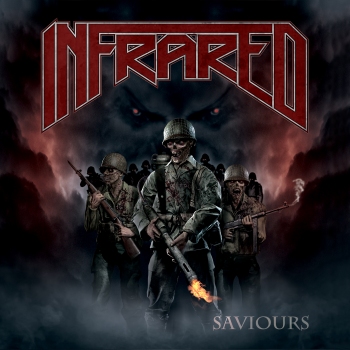 That predatory air retains its presence within The Demagogue, the following song also a court of threat and contagion which almost swaggers around ears as the guitars spin their sonic threads and rhythms pounce. Like a fusion of bands like Testament and Slayer, it hits the spot; increasing its temptation as calmer climes are ventured and melodic intimation embraced. It’s subsequent rising heat and intensity brings it back to its original sonic inference before Saviour explores an even darker trespass of menace and seduction. As we suggested, Infrared is not set on reinventing the wheel of thrash metal or even their core sound but there is a bold lining of adventure and imagination which makes their music and especially this track stand out.

Through the melodic and melancholic elegance to tempestuous roar of The Fallen and the voracious charge of All In Favour the album just hit the spot. Across both tracks the vocals of Kamal added more incitement to an appetite already happily feasting on the individual prowess and enterprise of the band, Forbes’ bass especially dark liquor stirring our taste buds. They are all attributes just as persuasive within the predatory They Kill For Gods and Father of Lies with its intensive atmosphere over increasingly manic and ferocious entrapment around demonic character. The most adventurous of all the tracks it simply enthralled.

The album finishes off with Genocide Convention, a trash dervish of sound and aggression with spiralling sonic wires and senses blistering turbulence. Our favourite track it brings the thoroughly and increasingly enjoyable release to a mighty close.

Uniqueness might be a rarity compared to familiarity within Saviours but from an already established base it breeds fresh adventure and captivation. The album lit our pleasure from start to finish and Infrared is further proof that very good things can only get better with age.

Saviours is out now through iTunes and other stores as well as @ https://infraredmetal.bandcamp.com