“Forget about it; let the two of us be a band!”

That was the beginning of French outfit Sendwood; a declaration roared when guitarist/vocalist Kriss Wood (ex-The Real Mc Coy) and drummer/vocalist Alex Mc Wood (Harmonic Generator) found themselves alone in rehearsal without any sign of their band mates. It is a spontaneity and defiance which equally fuels their music and a debut album which just makes you want to get involved.

From the first breath of Fist Leaf, there is a sense that anything could happen, that the pair themselves did not have a firm grip on where their imagination at the time of recording would take them or want to place one. The result a collection of songs which explode like a sonic scatter bomb on ears with the intent of fun, mischief, and rock ‘n’ roll. Last year saw the release of the duo’s first EP, Log Face, a potent introduction to their feral blend of blues, metal, punk, and rock which is off the leash within Fist Leaf. 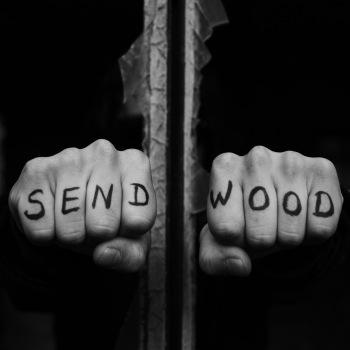 The first of three tantalising instrumentals starts the album off, Riffocephalus Minus a lure of crisp magnetic beats and meaty riffs swiftly bursting into a fiery proposition, though just as quickly that in turn slips into a harmonica led flirtation before evolving once again. It is a sign of things to come, of the unpredictable devilish antics on offer.

Demon immediately bursts from its predecessor; rapacious riffs and grooves colluding with more of Mc Wood’s rousing swings to grab ears and appetite. It is rock ‘n’ roll to the core, a ferocious slab of infectious enticement easy to roar along to as also the following Needle. Gnarly riffs hit the spot straightaway, beats and vocals taunting as they bait lustier attention, the song uncaging a wild incitement of garage punk ‘n’ roll again needing just a mass of seconds to get under the skin as untamed stoner lit grooves entwine.

Then the virulent catchiness of Leash consumed ears, its grungy stroll and contagious swing an insatiable persuasion with, as in all tracks, imagination rousing detours of varying potency along the way, next up Gotham proving the point. The second of the two is an asylum of wiry grooves and nagging riffs driven by rhythmic manipulation and a vocal unity which share lyrics which may not be the most inventive in the city but has you hollering along with matching energy.

Riffocephalus Medius is a scuzzy slice of sound and temptation, a brief but potent piece of enticement setting up the snarling presence of Penny, a song as seductive as it is unbroken. As so many within Fist Leaf it just pulled ears into eager attention and pleasure in tandem with an increasingly greedier appetite for the album and its hungry sounds. Gun is no different, the track a compelling trespass of concussive yet well-balanced rock ‘n’ roll simultaneously chewing upon and caressing the senses.

The album concludes with firstly the viral exploits of Ber, a track which as the album is maybe not looking to breed uniqueness but is as fresh and as hungry to arouse as anything around. It is followed by final instrumental, Riffocephalus Rex; a piece of captivation which is deceptively calm but with a carnival in its heart which subsequently erupts into a dirty clamour before easing into its cycle all over again.

Both make for a superb end to a thoroughly enjoyable encounter. Rock ‘n’ roll should be fun yet imposing, flirtatious but aggressive and Fist Leaf, indeed Sendwood pretty much tick all the boxes.

Fist Leaf is out now across most online stores.