After richly enjoying their previous EPs, it was easy to discover real intrigue and anticipation for the debut album from Hercules Morse. There were also hopes that it would strongly build on the potential and enterprise of those earlier encounters with the UK outfit and we can say that Vita Boundary more than delivers, the ten-track offering a feast of magnetic and infectious melodic rock with plenty of eager snarls and sonic blazes to feast upon.

The Southampton hailing quartet emerged in 2014 and released their first EP, Edge Of Life, the following year. It was met with praise and attention as well as potent radio play; success just as easily and more keenly tempted by successor Equine Size Comparison in 2016. Their live presence has been just as potent too, Hercules Morse sharing stages with the likes of Calvin Harris, Primal Scream, Duran Duran, and The Streets alongside supporting bands such as Turbowolf, Band of Skulls, Black Peaks, Blaze Bayley, Tiger Cub, Orange Goblin, and Dinosaur Pile Up. Their reputation has grown step by step and now looks poised to be escalated by Vita Boundary.

Musically they sit somewhere between the likes of Foo Fighters, Queens Of The Stone Age, and Biffy Clyro; their sound a fusion of hard and stoner rock infused with more psych and simply melody spun imagination. Quickly as opener Everything Is Great grabs ears, the album reveals it is a sound which has grown and matured from those previous encounters whilst embracing an even broader array of flavourings. Harmonies wrap classic rock bred grooves from the off, the lead vocals of rhythm guitarist Steve George captivating within the alluring flame of sound. Guillaume Redonnet-Brown’s beats and clips tease throughout too as the guitar of Harry Gardner spins a web of familiar yet fresh enterprise. It is a swiftly magnetic affair an echo of the album in that it is not strikingly unique yet everything on offer is enticingly individual to the band. 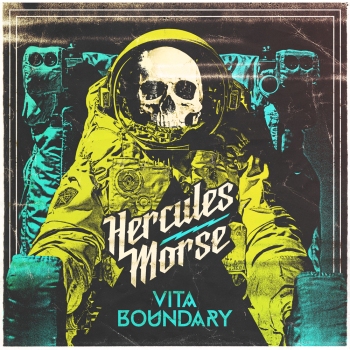 The following War Within similarly warms the appetite with recognisable and unique adventure. The dark hues of Paul Shott’s bass cast a great shadowed but infectious lure at the heart of the song and its catchy swing; egging on its virulent instincts and in turn those within the voice of George just as potently backed by those of Gardner.

Cuckoo leaps in next with its own addictive contagion, the beats of Redonnet-Brown bounding through ears with a persuasive swagger as the guitars weave another ridiculously tempting tapestry of hooks and melodic dexterity before Talk Me Down brings an earthier proposition to contemplate but one with big rousing rhythms and melodic adventure. Within a couple of listens, if that, each seduced eager participation in the lively strolls; a trait and persuasion which fuelled the enjoyment of the whole album.

There is a slight whiff of Voyager to the following Clockwork and its melodic glide across an enjoyably bumpy rhythmic landscape while Resigned reveals a more sombre lining and composed gait to its just as captivating stroll. Though neither quite matched the heights of those before them each song left ears hungry for more, Can’t See The Sunrise providing as it steps up straight after to steal best track honours. From its initial senses entwining groove and the rapier swings of Redonnet-Brown, the track had us drooling, vocals and the grumble of bass just escalating the track’s virulence and rapacious attack. That opening hook continues to pierce and sear the song, never allowing a moment for lust to relax as the song romps all over the imagination and spirit.

It is a success pretty much matched by the infection spewing Still Singing. As potent as it is from the first note, Vita Boundary saves its greatest moments for its latter stages though of course it is down to personal tastes as to its most fertile times. For us this and its predecessor is Hercules Morse at their most inventive and fiery best but equally most bold with melodies revealing a heat and rhythms a bite which simply inflames the rest of the band’s qualities.

The calmer proposal of The Story Goes similarly ignited the passions, its blend of light and dark as invasive as it is seductive and inescapably magnetic while closing track, Go For Broke, provides a fusion of tenacious rhythms, ear caressing harmonies, and spicy melodies which just get under the skin, especially the agile temptations of Shott and Redonnet-Brown. George and Gardner are just as compelling in voice and sonic invention though as the track brings the album to a rousing conclusion.

Vita Boundary is a masterful mix of the familiar and the boldly new; a rousing incitement built in layers of magnetic enterprise from a band which just gets bigger and more enjoyable, in this case, song by song.

Vita Boundary is out now on CD and digitally @ https://herculesmorseuk.bandcamp.com/album/vita-boundary