Scant Regard – Skipping Over Damaged Area 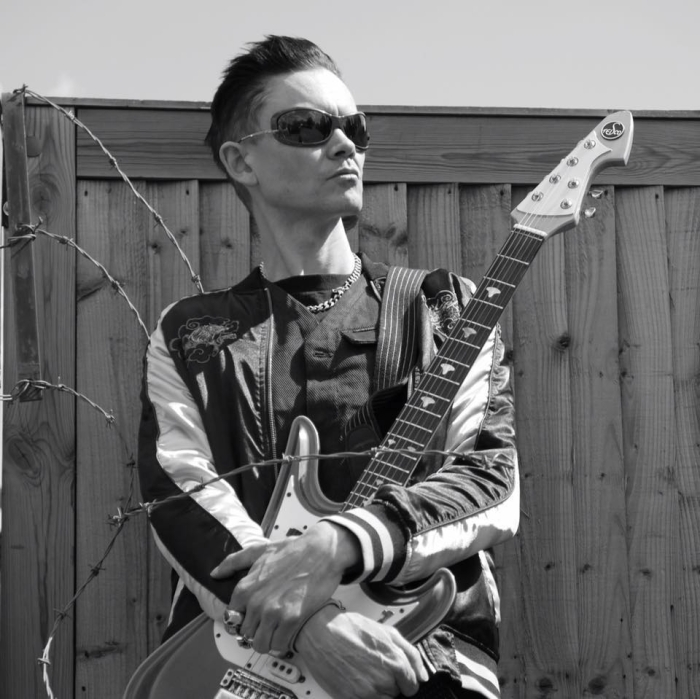 A body infesting, imagination twisting kaleidoscope to the hope and insanity of the world we shape, Skipping Over Damaged Area is the senses ravishing new captivation from Scant Regard. An album of unscrupulous hooks, electronic virulence, and guitar carved intimation, it surges through ears casting a realm of suggestion and reflection as devilish as the themes inspiring its creative antics leaving hope, fear, and sheer pleasure in its wake.

Scant Regard is the solo project of London-based guitarist/writer/producer Will Crewdson. He is a musician few can have failed to have been consciously or unknowingly pleasured by. Whether with the rock escapades of Rachel Stamp, which he co-founded, and She Made Me Do It or through his work with the likes of Adam Ant, The Selecter, Johnette Napolitano, Flesh for Lulu, Bow Wow Wow and numerous other bands he played guitar for, Crewdson is a guitarist who has been in demand because of his instinctive ability to incite and bend the imagination as well as simply ignite songs and ears alike. Scant Regard has been an adventurous showcase for his craft and skills across four previous albums, Skipping Over Damaged Area a riveting new addition to their ranks.

Exploring various shades in an overall theme “of the apocalyptic destruction and devolution of the planet we live on”, Skipping Over Damaged Area is a tenacious maze of styles and flavours glazed with a sci-fi nurtured intrigue. At times it is like a warped soundtrack to a seventies TV show such as UFO, Space: 1999, or Doomwatch but with a dark lining in its every move; corrupting hope and light at a turn, tempering their threat in the next.

The album opens up with the swiftly addictive Mostly Accidental, electric pulses exploding on impact as it swaggers into view with an almost predacious swing. Instantly electronic suggestion and animation dances and flirts on the senses, thick doomy hues underlining the brewing Westworld-esque imagery conjured in thoughts by the instrumental piece which fully comes alive once Crewdson’s guitar explodes on the imagination.

It is an outstanding beginning, one to be honest we had to listen to twice before moving on upon our first listen to Skipping Over Damaged Area but quickly matched in strength and temptation by Fuck Everything. Repeated samples of its title float across a landscape of attitude, another electronically woven tale which immerses the listener in an evolving cascade of light and dark, fun and irritancy driven by inspiring shards of guitar.

The following Ill Gotten Gains is a corruption of sound and reflection; an addiction breeding ground with melodic lures aligned to dark deeds. At times it lies somewhere between the evolution of Martyn Ware and Ian Craig Marsh’s project British Electric Foundation into their band Heaven 17 but with thicker shadows and dare we say even more infectious boldness.

Similarly Destroy (We’re Here to) has an eighties electronic edge to it around hooks and melodies which border on the salacious. Like the musical voice to a modern day Mars Attacks, the track waltzed over the senses, sending them spiralling as the imagination conjures. Simultaneously feet and hips were given a good smile wearing work out before BIGBLACKSHADES creates a conspiracy of sound and suggestion with its cold wave meets industrial espionage. Electronics and guitar again unite in a dark interpretation of life, its funkiness contrasting yet complementing the song’s voracious dynamics.

A lighter climate accompanies the outstanding Car Crash on Pluto, the track like something akin to Fred Schneider colluding with Helldorado as they glide the cosmos upon surf rock fuelled winds, while Hemi Demi courts indie rock tenacity within its electro pop enterprise as again seventies flavoured hues spice its rock ‘n roll.

Through the celestial smoulder of Traits, a track with lava hot melodies veining a volatile shimmer, and the hook carrying electro smoking canter of Sublineage Blues, ears and imagination are drawn into further incendiary drama while Posthistoric springs a more intensive atmosphere and adventure to navigate as a bubbling undercurrent of catchiness snaps, crackles and pops. All three simply tantalise and captivate as the imagination fantasises, Crime and Retribution in turn sparking the same responses with its brooding electronic groans and emerging guitar spun cold war clamour.

The album closes with Blue Moon Juice, a collage of vivacious sounds woven into a canvas of rockabilly bred devilry; imagine a psychobilly Yello and you get a hint of the track’s irresistible lure as it brings the album to a forcibly magnet conclusion.

Skipping Over Damaged Area is a prismatic insight and incitement for body and thoughts. It impacts on numerous levels, pleasures on every one. Crewdson is no stranger to attention and acclaim and can expect plenty more with what just might be his finest moment yet.

Skipping Over Damaged Area is out now on download and CD @ https://scantregard.bandcamp.com/album/skipping-over-damaged-area