When a band provides one of your all-time fav tracks there is always going to be an instinctive excitement at news of a fresh offering. And so it is with us and The Elixirs. Back in the aeons of time, well actually six years ago, the Gas City, Indiana hailing trio unleashed debut album Long Gone. It was a brawl of a riot bred in the band’s fusion of punk, psychobilly, and country.  Amongst its rich crowd rousing escapades was one song which has especially instilled itself on our daily playlists of pleasure and featured heavily on the site’s previous podcasts; Park It On The Lawn being that lingering beast. Now the band has returned with a brand new album in the devilish shape of Sin Alley, a release carrying a ravenous horde of similarly addictive proposals.

The Elixirs formed mid-2007 as The Stumblers with its original line-up of vocalist/bassist Dan Tedder, drummer Joe King, and guitarist Dan Savage. With things not quite igniting for the band, it evolved into The Boneyard Elixirs; Dan, now on guitar, and Joe recruiting bassist R.S. Lowe. Bassist changes led to the addition to now named The Elixirs of Dewayne Hughes, a time seeing the release of first EP Gut Cuts. 2011 saw Hughes leave and subsequently replaced by upright bassist Whitt. His talent and energy as well as the new dynamic of that stand-up bass was seemingly the spark to attention, that and the outstanding Long Gone which was released in 2012. Increasingly established and eagerly supported in the Indy scene, the band was thrust into ears far further afield by the album, including the likes of us in the UK. Since then the band has continued to uncage their inimitable rock ‘n’ roll whilst seeing a couple of line-up changes. The first album saw Dave “The Dudeist” replace Joe on the sticks and skins, he subsequently leaving after two years to be eventually succeeded by the initially reluctant Nate “Big Stick” Striedinger. From simply helping out his close friends at the ‘eleventh hour’ on live shows, he has become the perfect fit for band and a rousing sound now roaring with rigour across Sin Alley, their new rapaciously rocking, stomping, middle finger raising thirteen track DIY devil. 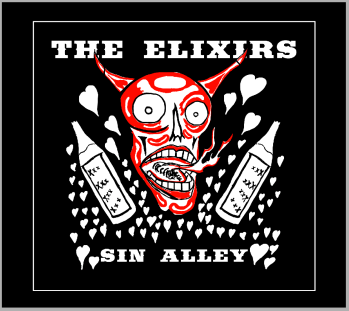 Fair to say as soon as the opening hook and subsequent rapping on wood of Knockin infested ears we were hooked, the track swiftly showing all the virulent slightly dirty traits of our first lusty affair with The Elixirs. Dan teases and flirts with the senses through his guitar as Whitt and Nate simply incite attention with their tenacious rhythms. The track is a fiery blend of psychobilly and punk ‘n’ roll; a mischievous almost salacious incitement about the struggle of being chased by temptation and sin. In the words of their press release; “when the lord makes it rain the devil makes it pour.”

The following Kentucky Whores reveals the dirtier edge to the band’s sound; its earthy air and uncompromising breath full of licentious temptation while Killer Custodian is punk ‘n’ roll at its most lustfully menacing with hooks to die for and rhythms to swing from. As impressive and unreservedly enjoyable as Long Gone was already at this point Sin Alley has it beat and cowering in the corner.

As the likes of the horror punk spiced In A Bottle and Know Remorse with its punk-a-billy meets Misfits antagonism come and go, attention and addiction to the album only escalated indeed boiled over again as the groove swinging, growl spewing Sauced had body and imagination dancing like a puppet after them. Its grumble alone was manna to the ears, its soiled groove lust brewing and rhythmic prowl irresistible; all leading to a final bedlamic outpouring before Wake Up gives every reason to holler at the top of one’s voice with limbs flung around in tandem.

Sin Alley is exactly as it suggests; every song a gateway into promiscuous sounds and inhibition free antics and each track eagerly uniting to make up one of the year’s most thrilling propositions so far. The Elixirs are ‘back’, bigger, bolder, and badder than ever; bliss!!