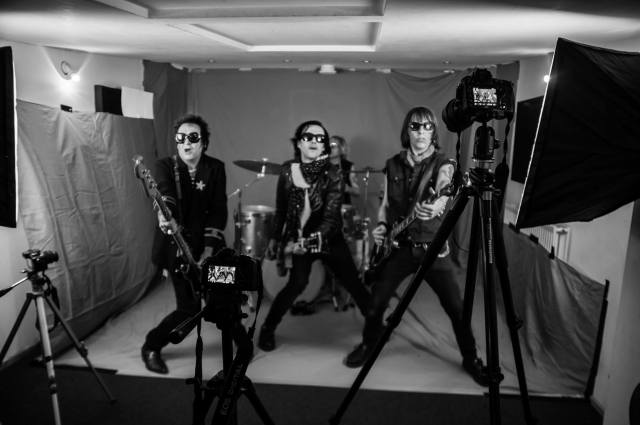 Paving the way to a new album later this year, UK glam punks The DeRellas have just released brand new single High Rise Supersize. Consisting of three tracks, it is a rousing slab of punk ‘n’ roll sparking sure anticipation for the band’s forthcoming full length.

With previous mini album of 2016, Freakshow, thrusting the band’s sound to a new plateau in craft, imagination, and energy, it has been easy to hope, even expect, another elevation in prowess and adventure in any successor. Eighteen or so months on, High Rise Supersize more than offers, indeed realises, plenty of the potential of such success.

Producer by ex-Vibrator, Pat Collier, High Rise Supersize is the first release to feature new vocalist/rhythm guitarist Joey DeRella and comes as the band venture across the UK on a string of live shows including playing Rebellion in August. High Rise Supersize opens with one of those hooks you just have to take a bite of, guitarist Luca DeRella luring swiftly keen attention, leading it into the waiting rhythmic incitement of bassist Timmy DeRella and drummer Billion Dollar Bish. There is boisterousness to the track which just entangles the spirit especially once Joey’s eager tones join in the rock ‘n’ roll romp. The track is DeRellas typical yet soon shows a fresh character and intent with its animated melodies and sneaky hooks. Equally there is a touch of old school punk devilment to its roar which only adds to the fun.

The lead song is accompanied by I Got Something To Say and a great cover of The Sweet classic Fox On The Run. The first similarly lays down tasty guitar bred bait to set things going, rhythms in tandem snapping across the senses. As quickly the track shows a darker and dirtier attitude loaded nature to its predecessor, snarling as it stomps spilling open belligerence as it swings. The track is superb, for personal tastes even eclipsing the lead track, and another reason to get a touch excited about that impending album.

Its successor also carries that dirty texture in its infectious stroll, The DeRellas infesting the veins of Fox On The Run with their own creative and mischievous juices. The band does not dissect and rebuild the well-known encounter but gives it a growl and a raw layer of rock ‘n’ roll soil which works a treat.

It is set to be a very busy summer for The DeRellas and if High Rise Supersize is a sign of things to come an extremely successful end of year through the release of that new album.

High Rise Supersize is out now on the band’s own label, Rockaway Records; available on 7” vinyl, CD, and download @ https://store.cdbaby.com/cd/thederellas 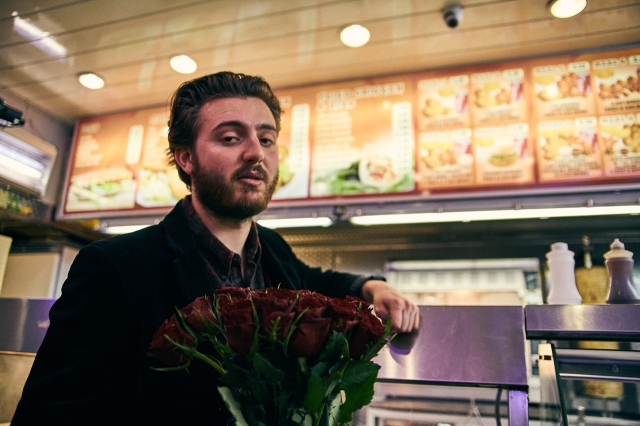 Having been introduced to British rocker  Louis Antoniou through two-track single Lonesomeville / I Let The Rain Fall Hard this past March, it was rather easy to find a keen appetite for his flavoursome rock ‘n’ roll especially now after the release of its successor, Rag Doll. As tempting and enjoyable as those two songs are, the new track just blows them out of the water. 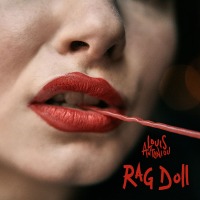 With his equally well-received single of February, You Ain’t The Girl, the trio of tracks this year to date revealed a great broad and imaginative canvas to Antoniou’s sound which Rag Doll stretches just a little more. The track has a tasty line in dark blues rock in its virulently infectious swing, a teasing almost sinister texture infesting the delicious groove and rapaciously tenacious character of the song.

Antoniou again shows his vocals to be a just as potent lure as his music and instinctive devilry on the guitar. This added to a rascality of unpredictability and a Queens Of The Stone Age-esque spicing made the song an irresistible lure, a devious one too as the track just seems to get bolder and more virulent by the listen.

Rag Doll is another in a planned five singles from Watford hailing Antoniou this year but after this latest offering is it being too greedy to hanker after a full album?

Rag Doll is out now.