Nosebleed – Scratching Circles On The Dancefloor

The last four years has seen British trio, Nosebleed establish and declare their voracious presence on the UK live scene; time which equally has seen their sound honed and reputation built, it all leading up to the moment they launch themselves at nationwide recognition. That time is now with the release of their debut album, Scratching Circles On The Dancefloor. It is a brief but relentless stomp of garage punk nurtured devilry allowing no time for a breath but giving a wealth of insatiable moments to breed instinctive lust for.

Thirteen virulent songs over twenty and a small handful of minutes, Scratching Circles On The Dancefloor flies from the speakers flinging song to song hooks like confetti and springing inventive twists like a mad professor. It is a rock ‘n’ roll dervish but with a devious control and scheme which sees feet, hips, and the imagination merciless to its manipulation.

Recorded live across one weekend alongside producer Andy Hawkins (Hawk Eyes, The Pigeon Detectives), Scratching Circles on the Dancefloor sets its intent with its first lungful of breaths. The initial guitar lure of opener I’m Okay wags an inviting finger before being quickly joined by hungry rhythms and the vocal mischief of guitarist Eliott Verity and bassist Ben Hannah. For fifty odd seconds the song rigorously hops around, Dicky Riddims’ beats setting the tone for the punk infested romp. 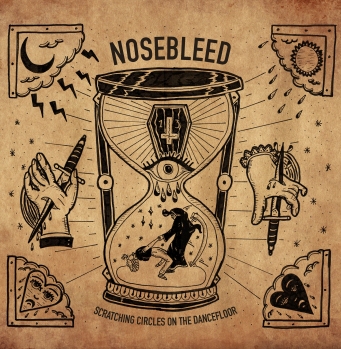 The voracious design of the album simply continues with the next pair of Wrong and Start Again. Not for the first or last time across the album, there is a whiff of seventies punk band The Cortinas especially in the first of these two with its sharp almost spiky hooks and instinctive catchiness while the second uncages a riot of bullish rock ‘n’ roll as punk as it is fifties scented honed into another irresistible and individual Nosebleed infestation.

As soon as the rhythmic rumble of Everybody breaks the momentary silence between songs, body and greed was sparked here; the track trapping an easy submission with its web of grooves and hooks let alone vocal incitement while Slow Down does the complete opposite as it had hips swinging and limbs flying with its dirt stained rock ‘n’ roll. Both tracks not only get under the skin but deep into the blood taking over spirit and soul simultaneously yet still get outshone by Scratching Circles. Like a puppeteer, the song dictated movement and energy; its Stones kissed heat and tenacious enterprise delicious spice in its creative irritancy and riveting manipulation.

Can’t Stay Here harasses like a child which will not take no for an answer to what it wants, the song bouncing around with its eyes firmly on the prize before Psycho grabs best track honours with its psychobilly hued rascality. Like the bad kid your mother warned you to stay away from, the track leads to wicked habits and salacious antics and boy does it reward for going astray.

A sixties garage rock hue lines the attitude soaked Kick Me When I’m Down next; swinging grooves and agitated rhythms gripping attention from its first touch, flames of melodic seduction from the guitar adding to its rich lure while I Can’t Tell You Anything creates a maze of hooks and grooves impossible to escape from, not that you will want to; an intent which is seeded in the album’s first note and only intensified thereon in.

It all comes to a close with What You Have Done, a ravenous collusion of grumbling filth lined bass, intrusive beats, and predacious riffs all linked by the band’s persistently anthemic vocals. It too has rockabilly/psychobilly infested fuel to its roar as well as a mouth-watering Misfits seeded glaze bringing the album to a close in majestic but certainly rampantly salacious style.

There are encounters which just inflame the individual instincts of us all, Scratching Circles On The Dancefloor is one for us, a release leading us to drooling ardour. We will not be alone as quite simply the album is a garage punk classic, indeed a rock ‘n’ roll masterclass from a band surely about to take national attention by the scruff of its neck.

Scratching Circles On The Dancefloor is out now through TNS Records and available @ https://tnsrecords.bandcamp.com/album/scratching-circles-on-the-dancefloor