Home › Interviews › Tides of change: Talking Currents with In Vain

Tides of change: Talking Currents with In Vain

There have already been some truly striking releases in 2018 and maybe no more so than the new album from Norwegian metallers In Vain. Currents is a progressive metal adventure which surprises at every twist and enthrals at every turn. With big thanks to him, we recently had the pleasure to explore the album closely with guitarist/songwriter Johnar Håland and the band, getting to its heart, its journey to release and much more….

Hi Guys, many thanks for sparring your time to talk with us.

It is fair to say that it is a busy time for the band with the recent release of your new album, Currents. Have you had time to sit back and reflect on its initial success and plaudits yet?

Hi! Thanks for your review and for taking the time to do this interview. Things are quieting down a bit now and as you say, the feedback has been really good. However, I am not really a person who looks back. My thoughts are more focused on the next album.

It seems that you have spent a long time in its creation, that time certainly reflected and heard in all its honed intricacies and bold adventures. What is the time scale for its creation?

Our previous album, Ænigma, was released in 2013 and there seems to be people who think we spent five years writing this album. That is not the case. There are several reasons for why this album was delayed. Personal issues forced me to put composing on halt for almost a year, and with me being the only songwriter in the band that forced the whole process to a standstill. In addition, I was working on the debut album of my other band, From Strength to Strength, which is a hardcore band that will release its debut album some time during 2018. On top of that I spent the majority of my spare time reading for the CFA (Chartered Financial Analyst), which is a self-study in finance I have been doing the last three years besides my full-time job. The album was actually finished in June 2017, but we could not set a release date until we had a proper tour booked to support the release. So there are many reasons for this long delay. Hopefully it will not take five years until the next album!

I am sure you will not disagree with us when we say it is your biggest, boldest, and most imaginative release. Did you have any specific aims when writing and creating Currents or it just organically evolved into what we hear?

I am not really sure to be honest. Our debut album The Latter Rain (2007) was also quite bold. Back then we were a totally new and unknown band who released an album of one hour with grandiose and complex music supported by 20 guest musicians. So that was definitely a brave musical undertaking.

In all aspects, we feel Currents eclipses its acclaimed and also richly enjoyable predecessor, Ænigma. Where do you see the biggest evolution?

To be honest, I am not a fan of comparing music. In my opinion, Currents is another strong album in our catalogue. It is a very diverse album full of contrasts and has high-quality music with longevity. I take it as a sign of quality that there are different opinions with regards to which of our albums people enjoy the most. I do not believe Currents is that much different from our previous work, but there are some changes. The production is more organic, there are some shorter songs and it is less black metal compared with our previous releases. 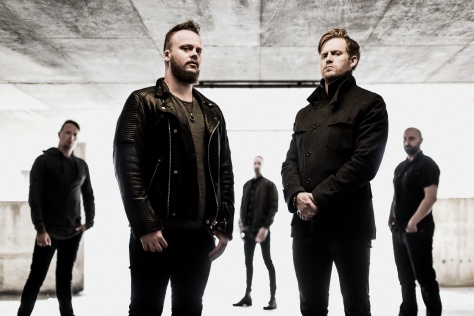 Currents embraces the widest array of flavours and styles in your sound yet, a truly expansive landscape weaved around bold yet often delicate contrasts but it still has that signature In Vain breath. Did you have to concentrate on keeping that character or it again just naturally evolved as indeed that broad tapestry of sound?

I think it is just a natural evolution to be honest. I do not really think that the music is that much different from our previous releases, however there are some new elements. For instance we have one song, Soul Adventurer, with mainly clean vocals. We also have a song with acapella choirs, Blood We Shed, and that is something we have not done before.

You linked up, as for the previous album, with producer Jens Bogren. It is fair to say he gets your sound and imagination but what does he especially bring to the mix which you feel adds to the realisation of your ideas?

We were very pleased with Jens’ work on Ænigma. We did not really have any other alternatives at hand and decided to go back to him. We wanted a much more organic sound this time around though, and I think we achieved that. Jens usually knows what we want and I think we have the same views on what sounds good and not.

Give us some insight into the recording of the album.

All the guitars and bass were recorded in my home studio, except for some lead guitar solos that Kjetil recorded at his home. Vocals and other instruments were recorded in Strand Studio in Oslo. Everything was re-amped by Jens Bogren and he also did the whole mixing and mastering of the album. However, we were never present in his studio and only communicated with him via email and phone.

We have had the real pleasure of having an insight into the lyrical side of the album ahead of its emergence. Can you share some of the themes and inspirations to the songs?

Currents is not a concept album in the traditional sense, however there is a topic and a red line in the music, lyrics and artwork. Currents, reflects on the colossal shifts and changes of our time. The present world is characterized by continental flows of people, traditions and cultures. Migration of people across continents and borders…Cultures merging. Dramatic shifts in lifestyle from one generation to the next. This topic exists in both the lyrics and the music however we only touch upon it in an abstract way with a top-down view. It is important for me to clarify that we do not have any direct political views on this matter reflected in our lyrics.  Besides that, the lyrical themes are varied, ranging from personal experiences and struggles, to contemplations on nature, philosophy and the historical and political development of this twisted world we´re living in.

Was there a particular process to the writing of songs for Currents?

The process was the same as previously. I write the songs alone and present complete compositions to the rest of the band. Later on I involve Sindre in the preproduction, as he also lives in Oslo. All members are free to add their personal touch to the songs and to give suggestions, but as the songwriter I have the final word.

It also sees a few guests such as drummer Baard Kolstad (Leprous, Borknagar), vocalist and former band member Kristian Wikstøl (From Strength to Strength), and vocalist Matthew Kiichi Heafy (Trivium). Were these happy happenings or thought of early on in the album’s creation?

This was something we decided on during the preproduction process. All the guests added their personal touch to the album and we are very pleased with their performance.

I know as for so many bands finances make a major part in decisions and possibilities in keeping going let alone forging ahead with releases, tours etc. for In Vain. How did this put restraints on Currents and do you see crowd funding as a feasible way forward?

We are fortunate to be able to record albums of the quality we prefer. The total budget for this album is around 50 000 EUR I guess, so hopefully people understand that they need to support us financially if they want to hear more In Vain albums in the future. We have not paid anything out of our own pockets. The label pays and we are also fortunate to get some financial support from various grants in Norway. However, the label obviously needs to get in break-even before we will get any part of the potential profit. Touring is more challenging and a tour costs a lot of money. Financing definitely puts a limit on how many tours we are able to do.

As with your previous albums, Currents is available through Indie Recordings. How have they helped, apart from the obvious, in bringing the album to our ears?

We have been with Indie Recordings since 2005 and we are actually the first band they ever signed. We have a good relationship with them. Obviously there are things that could be better, but that is always the case.

For those new to In Vain can you tell them about the beginnings of the band…the early days?

In Vain is a Norwegian band that plays progressive extreme metal and was formed in 2003. Andreas (vocals), Sindre (vocals) and myself (guitar) are the founding members, while Kjetil (guitar) joined the band in 2009 during the recording of our second album Mantra. Our bassist Alex has been around since 2013 and our drummer Tobias joined us recently. So far we have released four albums and two EPs, and we signed with Indie Recordings after releasing our second EP Wounds in 2005. Our latest album Currents was released on 26 January 2018 and we just came back from a European tour with Orphaned Land, Subterranean Masquerade and Aevum.

What is next for In Vain, shows etc. and once the dust of its triumph settles ahead?

We just came back from a European tour with Orphaned Land, Subterranean Masquerade and Aevum. We covered London, France, Spain, Arnhem and Essen. Our hope is to do another tour later in the year where we cover the countries we did not have the chance to go to on this tour. Besides that we will play some shows in Norway and some festivals.

Once again big thanks for giving us your time. Any last words you would like to share?

Thank you very much for your support, we appreciate it! To the readers; keep supporting great music, have a go at our new album Currents, and stop by our FB page at https://www.facebook.com/InVainOfficial/ for news, music, tour dates and other stuff.

Check out the review of Currents @ https://ringmasterreviewintroduces.wordpress.com/2018/02/04/in-vain-currents/