Ophe is the solo project of Bargnatt XIX, guitarist/vocalist with French outfit Område. His main band is a proposition which entangles an array of styles and experimentation into avant-garde soundscapes and has grabbed our imaginations since the release of their 2015 album Edari and even more so with its startling successor Nåde two years later. So you can imagine we were only too pleased to take a look at Litteras Ad Tristia Maestrum Solitude, the debut Ophe album when Bargnatt (Christophe Denhez of Nerv, Mur, and In The Guise Of Men) got in touch. Despite having embraced the ambience hued climates of post rock, industrial, electronica, and avant-garde metal merged by Område though, ears were not prepared for Litteras Ad Tristia Maestrum Solitude.

Certainly living up to its tag of experimental avant-garde black metal, Ophe’s sound is much more expansive than that. It is a ravenous maze of sound and adventure set in a tempest of emotion and atmospheric dissonance. Whether it is something you can say you physically enjoy is still up for debate but as one fiercely captivating and relentlessly tempting challenge it is inescapable. 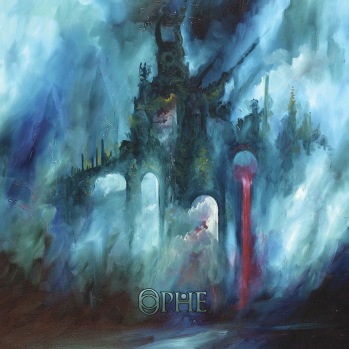 From opener Somnum Sempiternum the senses are taken on a turbulent sonic flight; a buffeting of winds around perpetual rallies of rhythmic antipathy the initial engagement. Bargnatt’s vocal currents are just as harsh within the intensive but controlled cyclone, rasping breath on sonic causticity and melody flirting with discord and dissonance. As invasive and toxic as it is an infectious hue merges within the emotional and aural trespass adding to the imagination sparking incitement that has already brewed. The track continues to grate and tempt across it’s almost nine minutes, never giving enough to mercilessly seduce but never coming close to leaving ears searching for alternative calms. Though a one man project, the album features the sax borne craft of Val Dorr; it too an almost schizophrenic, to use the press release’s description, protagonist in the midst of the blackened ambient storm.

Decem Vicibus is a calmer but no less dark investigation. Its tenebrific air wraps around mellow bordering on whispered vocals whilst alongside a hellacious scene unfurls hue by hue, cry by cry until the listener feels like they are trapped experiencing the visceral drama of a Hieronymus Bosch painting. The solemn chimes of church bells only add to the track’s deceitful incantation before XVIIII provides its own individual portentous peace complete with sax squeaks but only leading to a rabid smog of emotional disharmony clad in a web of musical unpredictability.

Whereas its air is thick almost acrid, the following Missive Amphibologique D’Une Adynamie A La Solitude has a clearer atmosphere but one just as sinister as guitars, bass, and sax host a dance of emotive dissidence. The best track within the album, it is a weave of rhythmic temptation and melodic seduction but each a welcoming vice flush with the animus of torment the vocals openly share. The track is superb, the moment the imagination ignited feverishly and even with an arguably over long presence enthrals from start to finish.

The album closes with Cadent, an elegant melody woven piece with clean vocals and harmonic reflections. All the while though, darkness lurks providing a threatening undercurrent which does not have its day but adds dark intensity to the beauty.

It is a fine end to an album which might have to fight to be called actually enjoyable yet we did indeed enjoy every moment of its tempest filled bitter atmosphere if some moments more lustily than others. For something to turn your calm, emotions, and thoughts into captivated turmoil Litteras Ad Tristia Maestrum Solitude is a certain quest to explore.