For all their striking projects and releases, of which there have been numerous, it is as Coilguns that the trio of vocalist/guitarist Louis Jucker, guitarist Jona Nido, and drummer Luc Hess has most lit our personal fires and inspired further our love for instinctive sounds and creativity. Their new album Millennials, with synth player Donatien Thiévent in the fold shows exactly why; the ten track exploration of manipulative noise and physical intimation a beautiful predacious trespass.

Written and recorded at the beginning of 2016, the self-engineered sonic invasion instantly overwhelms with the senses ravishing Anchorite. Guitars entwine ears in a devious, corrosive web as the rhythmic ingenuity of Hess stirs and ignites body and spirit. As arousing as his boldly thrown beats are the Jucker and Nido spawned grooves and noise bleeding tendrils are corrosive, all uniting in a hellacious virulence which strings the imagination and senses like a feral puppeteer; a manipulator simultaneously venting through the vocal squalls of Jucker. The track is immense, a visceral seduction which had us cowering as much as we were welcoming its abuse with greedy open arms.

The following Deletionism manages to breed an even more carnal tone and air; its carnivorous jaws littered with biting beats and caustic toxicity but just as infectiously persuasive as its predecessor in temptation and energy. The throaty bassline echoes in the senses as it courts the mercurial but ever invasive stroll of guitar; it all coming together with concussive majesty alongside the rapier swings of Hess and the throat and word scaring roar of Jucker. 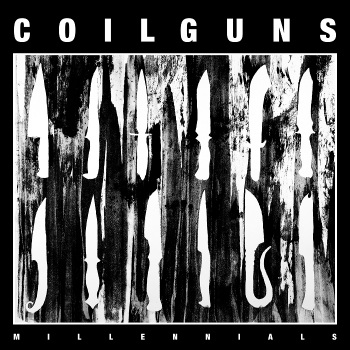 The album’s title track is next, a sense charring blaze of rock ‘n’ roll with sonic lava in its breath and inescapable virulence in its rhythms. Hess is simply superb, stirring the track’s intent with ravenous dexterity allowing the calm in its midst to challenge before stirring up a confrontation as violent as it is invigorating. From pure infection the track leaves as a toxic raping of ears and wow did it excite. From start to finish, there are compelling suggestions of best track on the album, and maybe that from Coilguns in general, this one of the most persuasive.

Spectrogram takes the listener into a sonically incinerated landscape, its shadows and scenery a lure of white noise-esque suggestion before a suffocating wave of sound and intensity thickens the drama and the increasingly haunting and haunted climate. Thiévent’s synth flows over the incitement like melancholic mist but with a surf like teasing which captivates, ears moths to its flame in the oppressively infectious dark of the track.

For one minute and a handful of imposing seconds, Music Circus Clown Care has the senses harassed and swinging as if on a barb lined trapeze before cavernous jaws drag them into the torturously arousing grip of Ménière’s. Once again, Hess had us bouncing as the sonic trespass of his companions infested ears and psyche, the track a murderous swagger of craft and contemplation borne of the darkest deeds and times and moulded into one irresistible breathless incursion.

The brief, inhospitable and again inescapably addictive blast of Wind Machines For Company emulates its title in a typhoon of sonic voracity while Self Employment Scheme is an investigation cynical in tone and air niggling at and sucking on the senses like an argumentative tick; never relenting in its harassment but ebbing and flowing in its severity. Both tracks simply brought our lust levels higher as too the grievously writhing antics of Blackboxing, the glorious track ducking and diving with quick footed rhythms and tenaciously swerving noise until delivering a brutally blistering concussion.

The release ends with The Screening, a fascination examination carrying intrigue, captivation, and threat in every note, syllable, and rhythm cast over the senses. Its initial temptation loaded coaxing with Hess once more shaping the bait, grows and intensifies by the moment, simultaneously becoming a harsher imposition and addiction to leave by its departure its victim on their knees breathless and lusting for more.

There is no one like Coilguns and nothing in even their own repertoire to match the noise alchemy of Millennials. It is far too early to declare an album of the year but believe us when we say it will not be straying from those most vocal nominations come late December.

Millennials is available now via Hummus Records and through https://coilguns.bandcamp.com/