Hardcore Anal Hydrogen is the manic creation of vocalist/programmer Sacha Mouk (Sacha Vanony) and guitarist/programmer Martyn Circus (Martyn Clement), a project emerging in 2009 and releasing debut album Fork you :​(​)​{ :​|​:​& };: that same year. Two years later, its successor Division Zero was unleashed with the band’s truly eclectic sound fully fledged but still growing and evolving as the mighty theatre of The Talas of Satan showed in 2014. As expected, things have not stood still since then, the pair’s imagination never taking a rest as they boldly breach another plateau in suggestive sound, diversity, and craziness with Hypercut, a release not so much schizophrenic as simply loco.

Everything from electro to rock, jazz to every shade of metal you can think of and more is entangled in Hypercut, much of which colluding to make album opener, Jean-Pierre, vigorously irresistible. Tenacious beats and electronic squirms grab ears first, guitars and rhythms swiftly involving their rapacious coaxing before the vocals of Mouk bounce in like a demented cartoon character. Raw metal trespasses burst as the song throws its self around dervish style; riffs, hooks, and grooves colliding like wayward atoms as keys conjure suggestion. Unsurprisingly twists and turns come at a rate of knots too, keeping the imagination dancing like a cat on a hot tin roof. It is a stunning start, prime but fresh Hardcore Anal Hydrogen offering up essences of artists such Pryapisme, Aphex Twin and Cryptopsy in varying degrees.

If the first is a tangled web, the following Coin coin is spaghetti of sonic wires all twisted up like the knack iPod headphones have when in the pocket if only for a few seconds. Circus’ guitar is a creative thrashing of enterprise yet with a composure and coherence which paints individual pictures as around it jazz flames and psych rock tendrils ignite and explore.  More progressive hues similarly escape the metal nurtured cage, Jean Michel Jarre-esque elegance honing an atmospheric landscape as wildlife voice their involvement before the track eventually drifts into the sunshine. 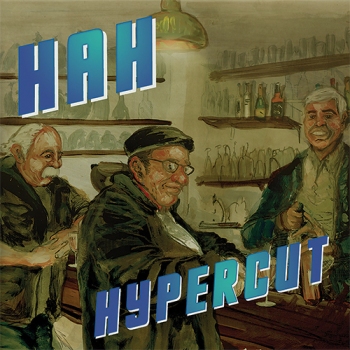 The Cajun opening of La roche et le rouleau is a deceitful prelude to rock ‘n roll time in the asylum;  a wacked out stomp again involving an array of flavours in its contagion and even managing to keep feet and hips involved as it slips into a sultry noir lit jazz detour, coming out the other side with even more certifiable zeal. It is a madness which is even lustier within Paul, a track which has fifties in its breath, dark gothic theatre in its air, and blackened dementia in its heart. Many bands weave a tapestry of diversity but as this track alone echoes, few can rival Hardcore Anal Hydrogen in the organic fluidity it comes in or the bedlamic mastery.

Next up, Blue Cuts provides a piano spun jazz saunter for a relatively ‘normal’ caress of the senses while Charme oriental creates a Mad Capsules Markets like sonic holler in a carnivorous extreme metal dissonance, but a fusion as infectious as it is invasive especially once Eastern hues join the musical curiosity. Both tracks simply enthral but are still eclipsed by Phillip. It is a sinister slice of musically and emotionally suggestive espionage; dark drama and deeds soaking every note in every twist and turn. In a moment in time where spying and death is headline, it manages to be a perfect echo yet has an intimacy of inner threat and turmoil just as potent. Its eight plus minutes conjures a cinematic tale in thoughts, no doubt one again sure to be individual to each listener but a rich one all the same.

Through the rhythmically tribal and aggressive spectacle of Murdoc and the glorious vocal and musical delusion of Entropie Maximum, one already lustful appetite just could not stop drooling; the second especially incendiary with its mischievously screwy, seriously catchy, unhinged romp. It has the body bouncing, spirit racing, and shoulders hunched in puzzlement; pure bliss.

In turn Sproutch savages the senses, electronics and metal at their carnivorous best and though only thirty seconds long leaves an unforgettable impact before the cosmic ingredients of Daube carotte unite with barbed hooks and hellacious metal in another rousing incitement, though it too has some intimation fuelled downtime where the imagination is even more stretched and pleasure overfilled.

Automne 1992 provides a slow prowl through rain drenched scenery and darkly shadowed threats. It did not quite grab the senses as its predecessors fair to say but has plenty for the imagination to weave with, 6:33 coming to mind once or twice while Bontemmieu brings the other side of climate with its summery charms and ethic festivities, though again there is just a tease of darker flirtation.