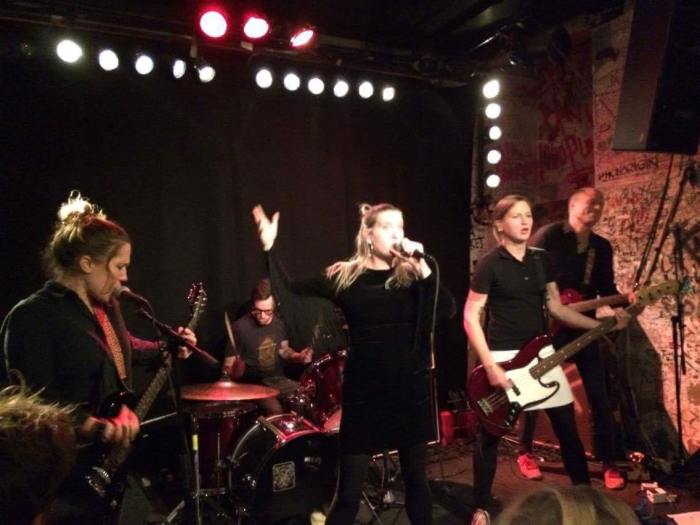 Ingen Tog Det Som Ett Skämt is the new EP from Swedish punks Sju Svåra År, a band said to be “a precursor to the wave of Swedish-language punk swept across Sweden in the early 2000’s.” With their name translated as Seven Hard Years, and latest outing as Nobody Took It Like a Joke, the Stockholm quintet is still possibly a proposition yet to be encountered by many outside their homeland but one which now rewards their investigation with one storming slab of politically charged punk ‘n’ roll. 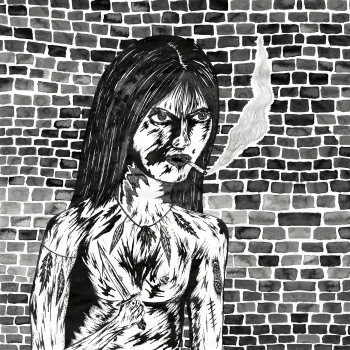 The EP opens with Skicka Några Rader, beats instantly rapping the senses as hooks and riffs gather to launch their own equally inviting assault. Just as potent are Josefin’s vocals, melodic yet forceful and backed with matching command by Sara within a web of hooks and punk grooves. The bass is rich captivation, guitars an imposing lure as rhythms bite with an instinctive snarl. Together it is a riveting enticement with a great Au-Pairs like hue to its brooding enterprise.

The following Maskeradbalen trespasses the senses from its first breath but again with a melodic infectiousness which enhances rather than tempers the song’s natural irritability. As with its predecessor, there is a seventies punk spicing at play but more Vice Squad meets Dolly Mixtures adding to the individual adventure cast by Sju Svåra År. Brief and snappy, the track is a viral growl which hits the spot within seconds, relentlessly teasing it for the next two minutes plus.

Fyra Sista Siffror is a more reserved slab of punk ‘n’ roll but just as bold in its imposing contagion and confrontational weave of melody and riff bound in suggestive grooves. Vocals drive the persuasion with continued magnetism whilst nagging beats are at the virulent heart of the song’s instinctive catchiness. Captivation at its harrying punk best with a hint of Sex Pistols inspiration at times, the track is superb and swiftly matched by the EP closing Oroliga avdelningen, a stirring incursion of rock ‘n roll as caustic as it is melodically seductive.

Having only now coming across Sju Svåra År though the excellent Ingen Tog Det Som Ett Skämt there is no escaping the feeling of having missed out the past decade, something an overdue courting of Storma hver hjärta will partly remedy. The best punk rock is instinctive, from the heart and there is no escaping that natural pulse behind one treat of a release.