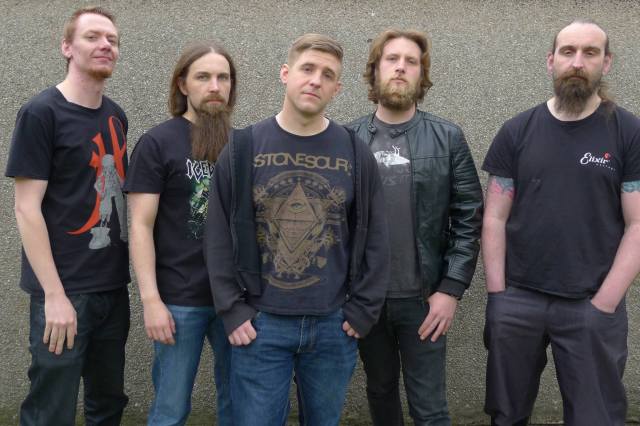 There is nothing better than hearing, release by release, the growth of a band in craft and sound especially when their potential is realised step by step whilst offering plenty more promise to be anticipated. Such has been the case with British metallers Promethium, a band who has openly blossomed record by record and now breaches a whole new plateau with Faces Of War.

Creating a sound merging old school with modern rapacious flavours, Lancaster hailing Promethium formed in 2007. Inspirations to the quintet included the likes of Black Sabbath, Metallica, Megadeth, and Pantera, essences still colouring a sound today which is as individual to its creators as you would wish. Quickly releasing their first EP, The Revenge, it was in 2009 and with debut album, Welcome to the Institution, that the band grabbed our, as so many others, attention. It was a raw yet accomplished introduction rich with that earlier mentioned potential brought to some fruition in its successor Origins four years later. As it built upon its predecessor’s strengths, so Faces Of War builds upon the second album but with a far more dramatic impact in songwriting to imagination to craft.

A concept album with each song offering a different perspective to war, the album launches at the senses with opener Enemies of Fate. A portentous sonic tone lures a march of riffs and rhythms into view with grooved armoury in its midst as vocalist Steve Graham swiftly joins the attack. It is a composed assault though, the band almost sizing up the listener rather than going at them full charge, providing a healthy mix of intrigue and predacious intimation. In no time guitarists Dan Lovett-Horn and Rossi are weaving a transfixing tapestry which is more than matched by the great vocal backing unity between Rossi and bassist Henry Greenwood; just two aspects in the inescapable maturity and growth in the band’s sound already being unveiled.

The outstanding start is followed by the similarly impressive Declaration. From its initial grooved trespass and Graham’s earnest calls, the track just wormed its way under the skin. The swinging strikes of drummer Kev Yates potently stir the senses, their rapacious incitement aligned to the groaning contagion of Greenwood’s bass as again a great maze of sonic enterprise is cast by the guitars with Curran Murphy guesting with a flavoursome solo. Drops in intensity brings spoken words from Nev Jones as Graham croons, a fluid twist which subsequently sparks a roaring finale before the outstanding P.O.W steps forward with its own dark clouds and intent. Grooves and rhythms instantly collude around vocals as an irritability fuels the nature of the track, essences of those aforementioned influences to the band spicing the volatile air of the track.

A shadowed calm is brought in by next up Shell Shock, its atmosphere as claustrophobic as it is seductive. That reflection rich restraint intermittently erupts in a cauldron of turbulence and emotive turmoil yet all the time guitars continue to weave a suggestive web of melody and predation. It is another gem and though only four songs in fair to say Faces Of War had us firmly hooked; a grip only tightened by 20,21,15 and its wirily grooved stroll. With Barry Mills sharing vocals with Graham across the song it boils with sonic dexterity while rumbling with rhythmic manipulation.

Such the massive heights of the first half of the album maybe it is inevitable that the task of living up to what came before slips up meaning personal tastes are not always stoked up as rigorously yet everything about Turncoat, from its vocal mix and rousing rhythms to sonic invention, is an ear grabbing proposition. It just misses some of the major sparks of its really striking predecessors.

As soon as the grooved webbing of Stolen Valour wraps ears straight after appetite was back to greedy, guitars and rhythms almost dancing on the senses with their snarling and badgering enterprise as again a vocal blend simultaneously entices and harries. With every passing minute the track simply blossoms as it evolves, harmony loaded vocals and creative unpredictability fuelling its compelling arsenal of invention. Another candidate for best track it is swiftly followed in matching captivation by Final Solution, itself an almost deceptive proposal being as intimidating and predatory as it is invasively infectious.

Featuring one of our favourite guitarists in Jay Parmar, Kill on Demand is one of those rousing anthems which have thoughts and spirit as eagerly active as the body. Led by the crunching beats of Yates and the brooding tones of Greenwood’s bass, the track is a magnetic fusion of old school and current ferocious metal shaped by the ever imaginative work of Lovett-Horn and Rossi and capped by the stylish raft of Parmar.

The album closes with its title track, another rigorously catchy and aggressive creative raid warlike in its tone and galvanic in its character. Epitomising the fresh strength and guile not forgetting that real maturity in the band’s sound, the track is a masterful conclusion to one mighty fine release.

Promethium and their sound just go from strength to strength, in turn so too pleasure. Yet there is still the feeling that they are yet to hit their full potential which considering the sheer unrelenting  quality of Faces Of War is something to keenly anticipate.