As A New Revolt – Speechless

Unleashing the turbulence and discontent fuelling the world today, As A New Revolt provides a potent voice for the masses and another truly fresh breath for a year with many momentous propositions within its roar. Speechless is a stunning introduction to the duo of Manu Barrero (vocals, machines) and Julien Lhuillier (drums), a four track EP reflecting the oppression around today and the increasing defiance to it but also a title pretty much summing up certainly our lost for words response to its impressive presence.

As A New Revolt create a sound spawned from the feral fusion of rapcore, punk, industrial, hip hop and much more. What emerges is a unique and ravenously rapacious affair driven by the dexterous tenacity of Lhuillier’s rhythms and infested with the sonic discord and vocal dissonance of Barrero. It is a greedily welcomed trespass of noise which swiftly gets under the skin and proceeds to manipulate body and spirit with its almost carnal infestation.

Speechless opens up with its title track, samples and corrosive noise colluding as tension springs an imposing swagger of noise and Barrero’s slightly psychotic tones. An underlying volatility only adds to the threat and lure, the track lumbering along with predacious intent as inspiring rhythms land with calculated intent. Essences akin to bands such as Rage Against The Machine, Pitchshifter, G.R.I.M., and Nine Inch Nails tease within the cauldron, all hues in the stirring and individual web of the French pair. 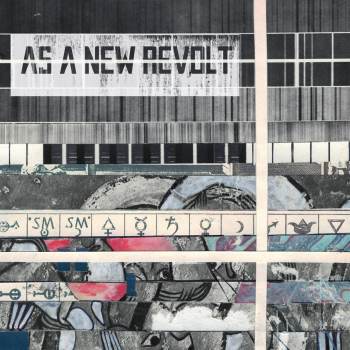 The following Riot Porn is even more urgent to invade the senses, its gait boisterous but happy to ebb and flow as Barrero fingers song and thoughts with his vocal stabs. As within its predecessor, electronic and melodic tendrils spiral across the encounter, their magnetic attraction and imagination as toxic as the barbarous winds sonically blowing around them. Lhuillier splinters it all with his own gripping rhythmic drama, every beat a shuddering yet anthemic coaxing inciting song and listener alike and managing to be even more manipulative and colossal in next up Now!, a track which steals the show for personal tastes.

With its eastern sonic lures and compelling beats, the track instantly seduces attention, its portentous air gripping the imagination as a tapestry of sound and enterprise aligns in a mutually riveting web. Though not in sound as such there is something of early Killing Joke to the song and band’s general sound, the same kind of rhythmic addictiveness and nagging ingenuity eating away at defences to inescapable success.

Perfect brings things to a close, the song ‘mellower’ in attack but tenebrous in tone and atmosphere as it challenges and incites second by second, note by note, noise by noise. Unsurprisingly after taking in the previous trio of tracks, there is a gloriously capricious character to the assault, a tempestuousness which builds and boils though it is content to menace through simmering provocation too as vocals and rhythms probe and inflame.

It is a superb end to a truly thrilling release which among many mouth-watering and momentous encounters across 2017 just might be the best of the lot.

Speechless is available now through Atypeek Diffusion / Sand Music across most online stores.