Formed in Dalian, China, consisting of 5 musicians from 4 different countries and now residing in Prague, in the Czech Republic, Mala Ruckus and their seriously captivating sound is one of the music world’s best kept secrets. Maybe and hopefully that will not be the case for longer with the upcoming release of the band’s debut album, People Mountain People Sea. It is a showcase and rich introduction to the quintet’s multi-flavoured indie folk pop/rock, a collection of songs which get under the skin like a sensuous itch and has the body and emotions bouncing like the first days of summer.

Formed in 2013, Mala Ruckus first came to our attention two years later when they introduced themselves and debut EP Make the Monkey Watch to the site. It offered three lively and swiftly magnetic songs which in hindsight certainly hinted at the wider tapestry of sound now shaping People Mountain People Sea. Those tracks make up a quarter of the album and sound as fresh and exciting amongst their new companions as the first day heard. That is the key to the band’s sound, its ability to feel as refreshing as its first listen a hundred times later, that coupled to a bold imaginative and an instinctive aptitude to be virulently infectious no matter how it comes.

Fronted by the instantly magnetically distinctive voice of Canadian vocalist/guitarist Alex Montyro, Mala Ruckus swiftly get down to business with opener Run. Straight away the melody casting strings of Montyro and Ireland bred guitarist Caolon O’Neill Forde coax ears, the crisp beats of American born drummer Sean Rollins lurking and finally adding a skip to the already boisterous song. The keys of Francis Carlisle and the bass of fellow Brit Ian James add their smiling strolls to the swinging encounter thereafter, the song like a fusion of Jim Jiminee and Arctic Monkeys and quite irresistible.

In saying that it is still eclipsed by the following Hoverboards where straightaway the medieval spiced mandolin of O’Neill Forde has ears and imagination hooked. That melodic invitation sparks a boisterous stroll of indie rock pop, rhythms tenacious bait within the track’s energetically melodic shuffle. Montyro’s vocals again just hit the spot as unerringly as the sounds around him, especially the pulsating bassline, kinetic parade of hooks, and the harmonic glaze from across the band.

Trees, Fields is next, the song a calmer but no less catchy proposition with its bold rhythms within a folkier air equipped with a sighing temptation of strings. Like an Autumn sunset, the song is a fine blend of melancholy and warmth becoming increasingly vivacious by the minute before making way for the compelling croon of Words. With a country twang and a more reserved urgency compared to its predecessors, the song sways in ears, sharing another adventurous side to vocals and melodic enterprise whilst echoing the success of those around it.

The sampled opening of Sheets sets the oppressive tone of the world but one soon calmed and evolved by the emerging melodic canter of the track. As with the previous song, its energy and spirit brews by the second, every twist and turn, each vocal and musical touch escalating in creative drama and thickening emotion. There is a Coldplay like scent to the song by its close but in a good way as it stirs the passions up ready for successor East Hastings. From its own gentle and provocative entrance complete with a Latin seeded seduction, the track rises up with evocative drama for a creative helter skelter. Revolving with fervour and diversity, the track is immense; a slice of indie rock theatre as composed and fluid as it is boldly unpredictable and the best song winner.

It is persistently rivalled to be fair, from those before and following such as the jazz funk lined Nowhere Bound with its smoky tone, soulful brass, and hazy melodies,  and in turn Take It Away. The second is a frisky carnival; its Mediterranean swing and smiling melodies pure flirtation backed as teasingly by vocals and its friskier rock ‘n’ roll side. Reminding a little of UK band JacksonsWarehouse, as a few tracks do, the song has hips swinging and spirit bouncing with zeal for four delicious minutes. 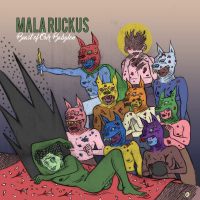 New single Beast of our Babylon brings a more sombre breeze to the adventure but with no less captivation and pleasure involved. It is a folk nurtured ballad with melancholic strings and acoustic elegance round the emotive tones of Montyro which just thickens and captivates second by second, maybe missing the mischief of other encounters within the album but rich in creative beauty to spark just as much pleasure.

The following pair of Fire and Ghosts ignite their own dose of lusty acclaim, the first a prime snappy fusion of the band’s folk/indie rock recipe and quite beguiling while the second is the perfect crescendo of energy and spirit. Its build from an emotive kiss and melodic caress is simply sublime, rhythms a brewing tour de force driving the increasing tempo and rousing air looming upon the senses, and its arrival into a virulent rock ‘n’ roll escapade irresistible.

The album departs with Barmaid, a raw sepia hued slice of lively folk seduction which has feet tapping, hips swaying, and vocal chords humming in seconds. Its sorrowful sigh is just as warming as its harmonic tempting and rhythmic teasing providing the perfect way to drift off into the sunset of People Mountain People Sea.

All the promise of that first EP has been exploited within the album but taken to a level not anticipated back then. It is quite wonderful and the fact that the common words coming from those hearing it with us is “Damn this band is good” says it all.